TOOELE, Utah (August 3, 2013) - The recent efforts made by AMA Pro National Guard SuperBike title contender Josh Herrin to elevate his game paid off in a huge way on Saturday at Miller Motorsports Park. The Monster Energy Graves Yamaha pilot came through in the clutch to defeat National Guard Jordan Suzuki's Roger Hayden and defending champion Josh Hayes in what must be considered the most thrilling premier-class contest of the 2013 GEICO Motorcycle AMA Pro Road Racing season to date. Ultimately, the race was decided due to a blend of decisive strategic decisions and courageous maneuvers. 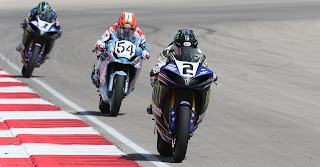