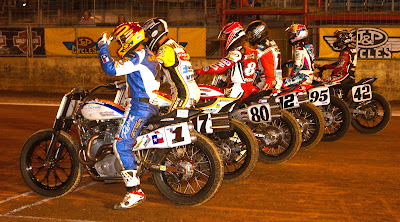 In less than 12 hours, The Rolling Thunder Show will take to the track at the Colonial Downs Raceway in New Kent, VA. for the running of the Virginia Mega Mile in round 9 of the 2013 AMA Pro Flat Track presented by J&P Cycles Grand National Championship season.

With this being a new venue for the series, it will be game on and roll the dice for the series' stars as they try to figure out the necessary set-up for the 1 1/4 mile facility.  Everyone will be on a level playing field in trying to determine what set-up is the needed combination in order to come out on top after the day's events are concluded and you can bet, as always, that the action on the track will be it's usual on the edge show.

First practice rolls off at 10:15 AM EDT as the local noise and neighborhood ordinances will take precedence in getting the event concluded before the curfew time of 5:00 PM EDT in order to satisfy the locals in town.

In the shot above from last week's Indy Mile, Jared Mees on the #1 Rogers Racing H-D XR750, Henry Wiles on the #17 Lloyd Brothers Motorsports XR, Steve Bonsey on the #80 Zanotti Racing XR, Brad Baker on the #12 Dodge Brothers Racing XR, JD Beach on the #95 TJ Burnett Farms Kawasaki and eventual winner Bryan Smith on the #42 Howerton Motorsports Kawasaki get ready to go out for their sighting lap prior to the 25-lap National main at the Indiana State Fairgrounds-hosted event.

Check out the full press release below from AMA Pro Flat Track to get ready for tomorrow's action and to see what/where to tune in to check out the action that will be streamed from the day's events at Colonial Downs as we get ready to rumble on the east coast for the running of the Virginia Mega Mile at Colonial Downs!

NEW KENT, Va. (August 23, 2013) - This weekend's Virginia Mega Mile, Round 9 on the 2013 AMA Pro Flat Track presented by J&P Cycles calendar, is quite literally an inaugural event like no other. Located in New Kent, Va., Colonial Downs is an oversized track by any standard. Measuring in at just over a mile, the first-time venue will play host to the top dirt track motorcycling talent in the country on Saturday, August 24, 2013 as they mount their twin-cylinder motorcycles for the sixth time this season. The course's long straightaways and high-speed corners are expected to create a fantastic and ferociously fast experience that will challenge both veterans and up-and-comers alike. 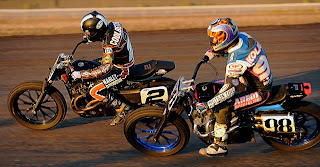 Kenny Coolbeth, Jr. #2 and Kayl Kolkman #98 are shown in action earlier in the 2013 AMA Pro Flat Track presented by J&P Cycles Grand National Championship season.  The series hits the track on Saturday, August 24 for round 9 of the season at 10:15 AM EDT for the first practice session in New Kent, VA.  AMA Pro Flat Track photo by Dave Hoenig.
An obvious candidate to claim victory at Colonial Downs is Bryan Smith (Crosley Radio/Kawasaki). Smith is the standalone winner on mile-long races in 2013 and his Kawasaki will surely put him in contention this weekend. A solid effort by the Flint, Mich. native will give him an opportunity to close in on current Grand National Championship points leader Brad Baker (Dodge Bros Racing/Harley-Davidson).
Baker currently sits atop both the GNC Twins and Overall Championships thanks to a consistent 2013 season. The 20-year-old Eatonville, Wash. product has finished in the top five in all eight main events this year, an effort highlighted by four second-place finishes and a solitary victory. Baker's fourth- and third-place results at the Sacramento Mile and Indy Mile, respectively, are reasons to believe that he is on the cusp of claiming his first 2013 victory on a big track.
Although most of his success this year has come on a 250cc motorcycle, Winn, Mich.'s Henry Wiles (Lloyd Brothers Motorsports/Harley-Davidson) will put his twin-cylinder machine to the test in Virginia. Wiles, who earned his ninth consecutive Peoria TT victory just two weeks ago, currently sits third in the overall Grand National Championship point standings.
Brandon Robinson (TJ Burnett Farms/Kawasaki) is another competitor that will be riding the wave of momentum as he heads for the east coast this weekend. Robinson, from Oxford, Penn., put together his second-best performance of the season last weekend at the Indy Mile with a second-place result and the 23-year-old will surely be looking for a similar finish this Saturday.
AMA Pro J&P Cycles Pro Singles
Wyatt Maguire (Kirkland Racing/Yamaha) currently holds the AMA Pro J&P Cycles Pro Singles Championship points lead by a mere four points. The Mead, Wash. native hopes to keep at bay his top competition -- Albion, N.Y.'s Ryan Wells (Waters Auto Body/Honda) -- as the Series heads to Colonial Downs for this weekend's event. Round 9 could prove to be that all-important event for one of the two riders as they try to break away from each another in the standings.
Fan favorite Shayna Texter (Crosley Radio/Honda) is coming off of her second win of the season after a dominating performance in Indianapolis. The Willow Street, Penn. product will look to improve on her sixth-place position in the J&P Cycles Pro Singles point standings by posting another mark in the win column during her stop in Virginia. Much like her Crosley Radio counterpart Bryan Smith, Texter has excelled on mile-long tracks this year, winning both main events held thus far and the rising star will be seeking her third 2013 victory this weekend.
Defending series champ and Davison, Mich. native Stephen Vanderkuur (Parkinson Brothers Racing/Honda) made big strides last weekend with his second-place result at the Indy Mile, his best performance of the year. Look for Vanderkuur, who currently sits fourth in the J&P Cycles Pro Singles point standings, to build on his momentum at Colonial Downs this weekend.
How to Catch the Action
AMA Pro Racing will be live streaming multiple channels of in-depth and behind-the-scenes multimedia content from this weekend's event on the AMA Pro Live streaming video website. AMA Pro Live puts fans in the director's chair, allowing them to choose from a variety of viewpoints alongside Live Timing & Scoring data.
Live streaming will begin at 10:15 a.m. ET/7:15 a.m. PT and will continue until the checkered flag flies at the end of the Grand National Championship main event. Log on and tune in at http://www.amaprolive.com/ft/.
Round 9 of the 2013 AMA Pro Flat Track presented by J&P Cycles season will take place at Colonial Downs in New Kent, Va. this Saturday, August 24, 2013, with practice and qualifying set to begin at 10:15 a.m. local time. For tickets and additional information about the event, please visit http://www.colonialdowns.com/motorcycle-race/.