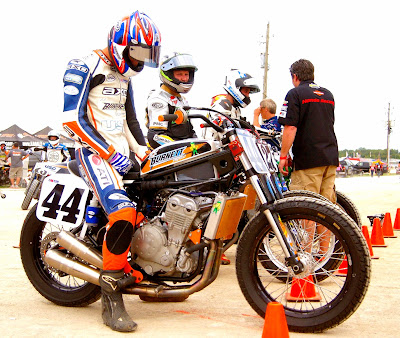 Brandon Robinson awaits the first practice session at the Indy Mile on Saturday, August 17 before heading out onto the track for the day's activities.  Robinson made the best of what could have been a miserable day after losing a motor in the first qualifying session during round 8 of the 2013 AMA Pro Flat Track presented by J&P Cycles Grand National Championship season at the Indy Mile and rebounded with a great last lap pass coming out of turn 2 that saw him get the best of Jared Mees and Brad Baker in the 25-lap National main event that landed him in the 2nd-place spot on the podium.

Check out the press release below from BRob44 and the TJ Burnett Farms/USC/Hart Racing Kawasaki team about the great turnaround the team made after overcoming the adversity of losing another motor on the day at the legendary Indy Mile.


Oxford, PA. – August 21, 2013 –Round 8 of the 2013 AMA Pro Flat Track presented by J&P Cycles Grand National Championship season is history and the TJ Burnett Farms Kawasaki team with rider Brandon Robinson earned a hard-fought 2nd-place finish at the legendary Indy Mile on August 17 with a last-lap pass to secure a spot on the box at the Indiana State Fairgrounds-hosted event. It was Brob44's second-best finish of the season after the Daytona win.


After two rough results in rounds 6 & 7 of the season at the Castle Rock TT (DNQ) and the Peoria TT (18th-place finish), let alone fighting a painful tooth over the Peoria weekend, BRob44 put himself back into the top-5 of the championship hunt with a great effort at Indy.
“Things started rough with losing a motor early in the day, especially after we practiced in the 6th-place spot, but we rolled out the back-up bike to qualify 19th out of the 47 riders on-hand who took a qualifying time,” stated Robinson. “Hats off to James Hart (Robinson's tuner), Billy Gruwell & TJ for getting us back on track after losing the motor early in the first qualifying session.” 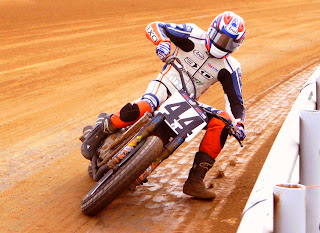 Brandon Robinson feathers the throttle on the #44 TJ Burnett Farms/USC/Hart Racing Kawasaki coming through turn one at the Indy Mile during the final qualifying session on Saturday, August 17.  BRob44 did a magnificent job of rebounding from a blown motor in the first session to return to qualify in the 19th spot and end the evening with a stellar 2nd-place finish, his second-best effort of the season after winning the Daytona Short Track II round on March 15.  Photo by Mike Stuhler/Stu's Shots.

As a result of finishing in the 2nd-place spot behind winner Bryan Smith on the Howerton Motorsports Kawasaki, Robinson and the TJ Burnett Farms Kawasaki team left Indy with 97 points in the championship hunt and only 6 points behind 4th-place man and defending 2012 AMA Grand National Champion Jared Mees. 
With five races in the 2013 season left (Colonial Downs, Springfield Mile I & II, Santa Rosa and Pomona), the team is poised for their run to the end of the season. “Colonial Downs coming up this weekend (round 9 on August 24) is a toss-up for us and the rest of the teams, but Springfield could really play into our hands over the Labor Day weekend,” continued Robinson, “and we're really looking forward to the doubleheader there after the weather postponement from the Memorial Day weekend. And I'm also looking forward to Santa Rosa and Pomona, where we ran in the top-10 last year.”


The TJ Burnett Farms/USC/James Hart Racing Kawasaki team hopes to see all of our fans stop by to say 'hi' to us at each of the remaining events so we can share with them the great time we are having this season. We hope to see you all soon!