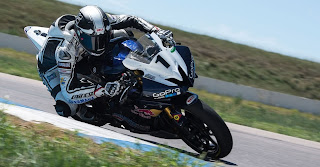 Tomas Puerta on the RoadRace Factory Yamaha YZF-R6 was named the National Champion today for the 2013 AMA Pro Motorcycle-Superstore.com SuperSport Series by mathematical elimination over the rest of the contenders in the series with one round and two races remaining for the season.  AMA Pro Road Racing photo by Corey J. Coulter/GeoCrash Photography.
"I'm really excited about this championship," Puerta said. "We worked really hard with the RoadRace Factory team all last year and this year to make it happen. My goal was to be consistent on all of the different tracks and it has been an awesome season. I'm just waiting to go New Jersey Motorsports Park to race in SuperSport one last time and then I plan to move to Daytona SportBike. We'll see what happens after that."
At the start of the 2013 season, it was announced that the Motorcycle-Superstore.com SuperSport National Champion would be determined by comparing the on-track performance of the 2013 East and West Champions anytime the two rising stars faced off during the year. The battle for the East Division Championship has been heated all year and will come down to next month's event at New Jersey Motorsports Park, with five riders still in contention: Corey Alexander, Stefano Mesa, Hayden Gillim, Miles Thornton and Travis Wyman. After comparing Puerta's finishing position at each round with the results of each rider still gunning for the East crown, it was determined that Puerta finished in front of each rider sufficiently over the course of the season to guarantee his spot atop the charts and in the record books as the 2013 Motorcycle-Superstore.com SuperSport National Champion.  Puerta takes the reins from last year's Motorcycle-Superstore.com SuperSport Champion James Rispoli, who joined the GoPro Daytona SportBike ranks for the 2013 season. Without an active, defending class Champion competing with the coveted No. 1 plate in SuperSport, Puerta has been granted a provision allowing him to compete aboard the No. 1 RoadRace Factory Yamaha YZF-R6 when the series returns to New Jersey Motorsports Park for the New Jersey Lottery Devil's Showdown, scheduled for September 13 - 15, 2013. For tickets and information, please visit http://www.njmp.com/2013-geico-ama-pro-road-racing-devils-shadow.html.
The following charts break down Puerta's performance compared with each East Division title contender over the course of the 2013 Motorcycle-Superstore.com SuperSport season:
Next Up
The AMA Pro Vance & Hines Harley-Davidson Series will kick off the $60,000 XR Showdown with a doubleheader event at the Red Bull Indianapolis on August 16-18.
The full GEICO Motorcycle AMA Pro Road Racing series will then travel to New Jersey Motorsports Park for The New Jersey Lottery Devil's Showdown on September 13-15 for the penultimate round of the 2013 season.
GEICO Motorcycle AMA Pro Road Racing is broadcast on CBS Sports Network as part of the CBS Sports Spectacular. Fans can find CBS Sports Network on their TV by using the channel finder at http://www.cbssportsnetwork.com/channel-finder.
In addition to the live broadcasts on CBS Sports Network, AMA Pro Live will be live streaming multiple channels of behind-the-scenes video of the weekend's activities alongside Live Timing & Scoring. AMA Pro Live puts fans in the director's chair, allowing them to choose from a variety of viewpoints including track cameras, paddock cameras and a press conference channel at http://www.amaprolive.com.
Stay connected with GEICO Motorcycle AMA Pro Road Racing on social media at http://twitter.com/AMAProSBK and http://www.facebook.com/AMAProRoadRacing.
About GEICO Motorcycle AMA Pro Road Racing
GEICO Motorcycle AMA Pro Road Racing is the premier motorcycle road racing series in North America and is universally regarded as one of the most competitive road racing organizations in the world. The 2013 schedule consists of nine rounds of competition on the country's finest road courses. The Series is comprised of four production-based classes: AMA Pro National Guard SuperBike, AMA Pro GoPro Daytona SportBike, AMA Pro Motorcycle-Superstore.com SuperSport and the AMA Pro Vance & Hines Harley-Davidson Series. Learn more about GEICO Motorcycle AMA Pro Road Racing at www.amaproracing.com/rr/.
Posted by Stuman714 in Indy at 8:57 PM