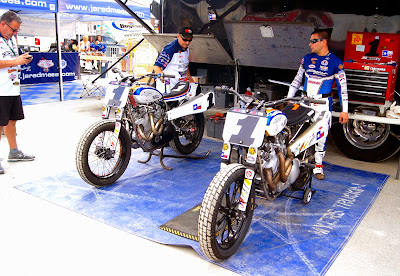 Jared Mees took advantage of the mechanical and electrical problems today suffered by championship points leader Brad Baker and last week's Indy Mile winner Bryan Smith to take his first win of the season in round 9 of the 2013 AMA Pro Flat Track presented by J&P Cycles Grand National Championship at the Virginia Mega Mile at Colonial Downs.  Mees also got tuner Kenny Tolbert his first win of the season with his new team after joining the Rogers Racing fold late last year.

Qualifying in the 9th-place spot, The Jammer took his #1 Rogers Racing XR and won his heat race, took a 5th-place in the Dash for Cash and took the win in the 18-lap National main over championship contender Henry Wiles on the #17 Lloyd Brothers Motorsports Ducati by over 1.8 seconds, with last week's Indy Mile 2nd-place finisher Brandon Robinson coming home in a solid 3rd-place finish on his #44 TJ Burnett Farms Kawasaki after falling off in his heat race earlier in the day and regrouping to make the red flag restart.

In the shot above, Mees and the Rogers Racing team (including team owner Craig Rogers, left and tuner Kenny Tolbert) get the #1 Rogers Racing/Blue Springs H-D XR750s ready for the Indy Mile in their pit area on Saturday, August 17.

Mees gained a few points in the championship on the day after points leader Brad Baker lunched his second motor of the day on his #12 Dodge Brothers Racing XR during the main, and only completing eight laps, while Indy and Sacto Mile winner and early race favorite reportedly had electrical gremlins strike again on the #42 Crosley Radio/Howerton Motorsports Kawasaki.  Smith didn't take a sighting lap just prior to the National which left questions hanging as to whether his mount was up to make the start several minutes later.  Baker finished in the 19th-place spot and Smith limped the Howerton rocket home into 12th place.

Smith and Wiles swapped spots in the overall championship after the end of the day, and Mees still sits in the 4th-place spot.  You can get the full results here thanks to AMA Pro Flat Track.

Larry Lawrence made the trip to the east coast to cover round 9 for Cycle News, and you can read his report here.

You can check out the full press release below thanks to AMA Pro Flat Track as the series heads to the Springfield Mile for rounds 10 & 11 on August 31-September 1 over the Labor Day weekend at the house of speed at the Illinois State Fairgrounds.


NEW KENT, Va. (August 24, 2013) - Jared Mees (Rogers Racing/Harley-Davidson) took home his first victory in 2013 to close out Saturday's Virginia Mega Mile, Round 9 of the 2013 AMA Pro Flat Track presented by J&P Cycles season. The inaugural event on Colonial Downs' supersized 1.25-mile circuit in New Kent, Va. proved to be a wild one. For the first half of the race, Bryan Smith (Crosley Radio/Kawasaki) looked to be well on his way to a third 2013 victory until he suffered a bike malfunction on lap eight, opening up the flood gates for his competitors. Defending Grand National Champion Mees took full advantage of Smith's mishap, taking the lead and never relinquishing it for the remainder of the 18-lap main event. 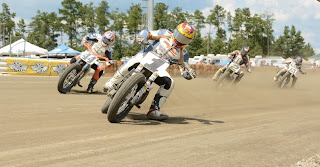 Jared Mees #1 leads Brandon Robinson #44, Kenny Coolbeth, Jr. #2 and Mees' fiancé Nichole Cheza #15 during heat race #3 action today at the Colonial Downs Mega Mile event in New Kent, VA.  Mees took the top spot on the box after the 18-lap National main for his first win of the season, with Robinson recovering from a fall in their heat race to end the day in the 3rd-place spot.  AMA Pro Flat Track photo by Dave Hoenig.
"I got a decent start and thought I would just dice it out with Henry (Wiles) and Brad (Baker) for second after seeing Bryan (Smith) get out to such a commanding lead early on," said Mees. "As soon as Bryan's bike broke and Brad dropped out, I kept making my marks and just brought her home. I've been up and down all season and to get this win here is huge. This track is really big and my Harley-Davidson brought me home. I know 90% percent of the fans here are Harley-Davidson fanatics, so rock on!"
Mees' Virginia Mega Mile win marks his fourth top five finish out of his last five main events. He currently sits fourth in the points, just 28 markers behind current GNC points leader Brad Baker (Dodge Bros Racing/Harley-Davidson). The Clio, Mich. product is getting hot at the right time, as there are just four critical races remaining on the 2013 schedule.
Henry Wiles (Lloyd Brothers Motorsports/Ducati) posted a solid second-place result which may have been the most impressive feat of the day, considering the Winn, Mich. product was forced to start on the fourth row in the main event. Wiles got an excellent start and within laps placed himself in the front group of riders, ultimately finishing 1.885 seconds behind Mees.
Oxford, Penn. native Brandon Robinson (TJ Burnett Farms/Kawasaki) backed up last weekend's impressive second-place finish at Indy with another podium finish at Colonial Downs. Robinson now sits fifth in the overall Grand National Championship standings after a shaky mid-season string of rough finishes for the young star.
Salinas, California's Briar Bauman (Monster Energy Kawasaki/Kawasaki) and Morris, Connecticut's Kenny Coolbeth Jr. (Harley-Davidson Motor Company/Harley-Davidson) rounded out the top five, respectively.
Current series points leader Baker had his championship points lead slashed by mechanical gremlins in Virginia. Starting from 13th on the grid, the Eatonville, Wash. native quickly worked his way up into the front group and was poised to challenge for the lead before his bike came up lame around the halfway point. His uncharacteristic 19th place performance is his only main event finish outside of the top 10 this season. The 20-year-old suddenly finds himself with a less comfortable lead in the overall Grand National Championship points chase, leading Wiles by just 17 points, 156-139. Smith sits just 5 points back at 134, with defending champ Mees another 6 back at 128.
AMA Pro J&P Cycles Pro Singles
The AMA Pro J&P Cycles Pro Singles main event was a 10-lap shootout for the checkered flag and it was Cody Johncox (Sunnyside Cycle/Yamaha), starting from second position on the grid, who came away with the win in what proved to be the closest finish in J&P Cycles Pro Singles competition this year.
The race was an all-out scramble, with several riders fighting for position from flag to flag. Johncox took the lead on lap seven and was able to hold off the five-rider lead pack, just edging out his competition on the final circuit. Willow Street, Penn.'s Shayna Texter (Crosley Radio/Honda) skillfully maneuvered her way around a slew of competitors to finish second in the race by a scant .008 seconds. "To be honest, I was just hoping I wasn't going to have the lead coming off the last turn," said Johncox. "It turns out I did and I was able to barely hold onto it and it paid off. I saw Shayna (Texter) coming up behind me and couldn't figure out how she had made up so much ground starting from the second row. I'd like to thank my family and all of my sponsors that allowed me to be here today."
Defending J&P Cycles Pro Singles Champion Stephen Vanderkuur (Parkinson Brothers Racing/Honda) got out to an early lead and at one point looked as if he'd finally record his first victory of the season. However, Vanderkuur's early lead would quickly turn in to a fierce five-way battle between himself, Johncox, Texter, Jeff Lowery (Englehart Racing/Honda) and current J&P Cycles Pro Singles points leader Wyatt Maguire (Kirkland Racing/Yamaha). Vanderkuur would go on to close out the podium with a third-place finish as Lowery and Maguire would round out the top five, respectively, with all five riders finishing within half of a second.
Next Up
AMA Pro Flat Track presented by J&P Cycles heads to Springfield, Ill. for Rounds 10 and 11. The doubleheader Labor Day weekend will feature the stars of the sport competing on the legendary Springfield Mile for the first time this year on Saturday, August 31, 2013 and again the following day on Sunday, September 1, 2013.
AMA Pro Flat Track presented by J&P Cycles is a national motorcycle racing series in North America. Sanctioned by AMA Pro Racing, the Series is one of the oldest forms of motorcycle racing and is highly regarded as the most competitive form of dirt track racing in the world. The 2013 schedule consists of rounds on the country's finest dirt track courses. For more information on AMA Pro Flat Track presented by J&P Cycles, please visit www.amaproracing.com/ft.