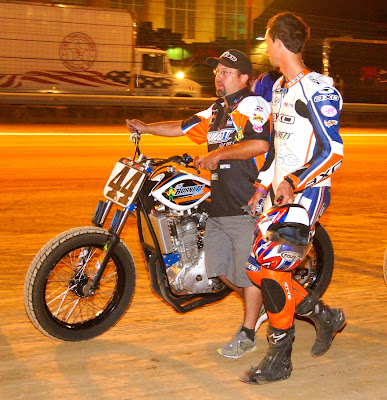 Brandon Robinson backed up his 2nd-place finish at the Indy Mile from 12 days ago with another stellar run to the podium to take a 3rd-place finish at Colonial Downs Raceway in round 9 of the 2013 AMA Pro Flat Track presented by J&P Cycles Grand National Championship season on Saturday, August 24.

Robinson, aboard the #44 TJ Burnett Farms/USC/James Hart Racing Kawasaki EX650, took the long road home in getting there after sliding out during his heat race at the Virginia Mega-Mile and restarting from the back only to come storming back to make the cut to the 19-rider main in New Kent, VA.

After several riders were eliminated due to the dry and dusty conditions found at the horse racing facility that sits just east of Richmond, VA., the Pennsylvania rider managed to run up front for the duration of the shortened, 18-lap National main to card his fourth podium of the season and his fifth top-5 in nine rounds this season.

The soft spoken rider who lets his right wrist do the talking, enjoyed the new facility that The Rolling Thunder Show christened last weekend, and stated that he had never been to a track that allowed 'full throttle, feet on the pegs' racing that the riders encountered at Colonial Downs, and obviously it worked in his best interest by carding another great spot on the podium.

In the shot above, Robinson and his crew chief, James Hart, roll the #44 TJ Burnett Farms/USC/James Hart Racing Kawasaki out to the line during rider intros at the legendary Indy Mile on August 17, where Robinson earned a 2nd-place finish for his best result since the Sacramento Mile earlier this summer.

Check out our press release below on behalf of the great group of guys on the TJ Burnett Farms Kawasaki team to see what BRob44 had to say about the new venue encountered last week in Virginia.


Oxford, PA. – August 28, 2013 –Round 9 of the 2013 AMA Pro Flat Track presented by J&P Cycles Grand National Championship season at the inaugural Mega Mile saw the TJ Burnett Farms Kawasaki team with rider Brandon Robinson earn their second podium result in as many races as Brob44 brought the team's EX650-based mount home to a 3rd-place finish in New Kent at the Colonial Downs Raceway. The result marked the fourth podium for Robinson and his fifth top-5 of the season.


After a 2nd-place effort at the previous week's event at the legendary Indy Mile, the #44 TJ Burnett Farms Kawasaki rider rode to another solid finish, even after hitting the ground in his heat race. “We were pushing a little too hard and just slid out while in the lead,” stated Robinson, “and I'm a little sore, but the bike was good to go and we were able to regroup and make the National main after the restart, and then it was feet up and wide open the rest of the way. I've never been able to ride like that at any other track, so it was a cool experience to be able to do it at Colonial Downs. It was really a fun track to race at.” 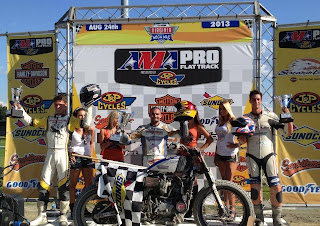 
As a result of finishing in the 3rd-place spot behind winner Jared Mees on the Rogers Racing XR750 and runner-up Henry Wiles on the Lloyd Brothers Motorsports Ducati, Robinson gained a few more points in the championship hunt to remain solidly in the 5th-place position in the overall championship standings with 113 points. Brad Baker still leads the standings with 156 points in spite of his DNF in Virginia, with Wiles leapfrogging around Bryan Smith for the 2nd-place spot (139-134 points) and Mees holding on to the 4th-place spot (128 points.)


Four races remain in the 2013 AMA Pro Flat Track presented by J&P Cycles Grand National Championship season, with the doubleheader round coming up this coming weekend over the Labor Day holiday at the Springfield Mile. “We're really looking forward to Springfield, and we'll have all four bikes rebuilt (from the motor loss at Indy) for JD Beach and I to ride. It should be a great weekend for all of us,” continued Robinson.


The TJ Burnett Farms Kawasaki team is looking forward to seeing all of the fans at Springfield this coming weekend, and invites each and every one of them to come down to visit with us so we can share the great fortunes we are experiencing this year with all of you. Please be sure to come on by and check us out during the fan walks at the Springfield Mile I & II events on Saturday, August 31 and Sunday, September 1!