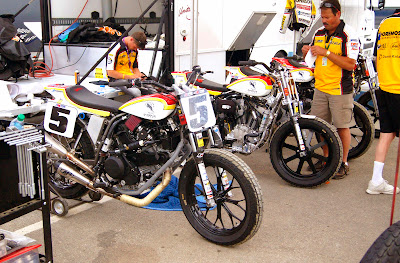 Round 8 of the 2013 AMA Pro Flat Track presented by J&P Cycles Grand National Championship saw the stars of The Rolling Thunder Show share the stage with the Indiana State Fair as well as the 6th Annual Red Bull Indianapolis MotoGP running just down the street at the Indianapolis Motor Speedway.

But it was all action at the Indy Mile as the event saw the largest turnout of riders entered in the Expert Twins class for the season, with a total of 47 riders entered, all of which took a qualifying time to try to make the 18-rider cutoff for the 25-lap National main.

At Indy however, the field was bumped to 19 riders as new Lloyd Brothers Motorsports/Ramspur Winery/Foremost Insurance rider Jake Johnson was forced to take a provisional spot in his first time on the team's immaculately prepared #5 Ducatis.  Yes, that isn't a typo as JJ went through two of the team's mounts in what was reported by team tuner and head wrench, Brent Armbruster, as being electrical problems that caused Jake to roll off the field without power in both his heat race and semi.

Johnson came back to card an impressive 11th-place finish after starting from the fourth row, and had actually worked his way into the top-10 before 'making a mistake' in getting off line with just a few laps to go in the National main.  Team mate Henry Wiles took the team's #17 Ramspur Winery-owned and Arbruster-prepped XR750 to a solid 7th-place finish on the evening.

In the shot above, the LBM team goes about their early event duties getting the team's three Ducatis and one XR ready for action at Indy prior to the day's first round of practice. 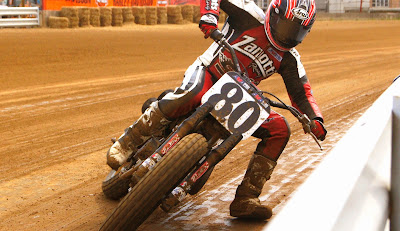 Steve Bonsey made his first appearance on the #80 Zanotti Racing/RGR/Arai-sponsored XR750 at Indy, and his second overall with his new team.  Bonsey, who has ridden for team owner Dave Zanotti in the last two 'off-season' Gene Romero WCFTS events in Las Vegas, winning three of the four races over the course of the two years, carded an strong 8th-place finish at Indy.

Bonsey is shown above during the final qualifying session of the day at Indy in turn one. 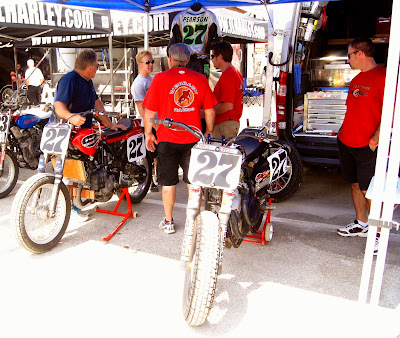 The Iowa-based Weirbach Racing team rallies around the team's rider, Rob Pearson, and the team's #27 Weirbach Racing/KDM Forest Products/Michael King-backed Suzuki SV650 and H-D XR750.  Pearson rode the team's Suzuki at Indy to a 10th-place finish, which kept him in the 9th-place overall spot in the championship standings.  According to team co-owner Ted Weirbach (2nd from right, above) after parting with Pro Singles rider Dominic Collindres earlier in the season, they are just concentrating on their first full season in the Expert-ranked division, and have put their Kawasaki program on the back burner for the time being and just concentrating on the team's two bikes for now. 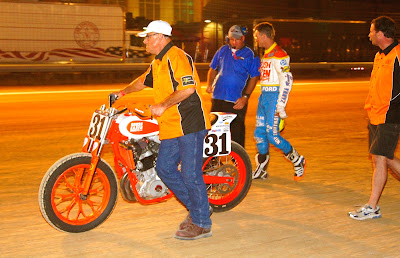 Local hero and Clermont, Indiana resident Dan Ingram probably should get the hard luck award for his efforts at Indy this season after ending the evening in the 19th-place spot.

Battling for the lead in his semi, Dapper Dan made the cut with a 3rd-place finish to card his way into the Indy main, where a master link on the chain snapped on the first lap, ending his evening way too early for the #31 Brush/Eaken Racing/Dollar Bill/Zanna Racing-backed Kawasaki mount.

In the shot above, the winner of the Dollar Bill Racing 'Push the Bike Out' contest, Rick Barger, leads Ingram, Dave Brush and the rest of the team out to the starting line for the main event at the Indiana State Fairgrounds.

Of note, Ingram should also be awarded the Ironman of the weekend for the ballsy removal of his pinned finger from his crash earlier in the year at the Sacto Mile.  Him and his buddy, Dan Laxen, used a phone camera to record the removal of the pin from Ingram's finger in his garage at home that left many pretty squeamish while viewing it, this person included.  The guy's got guts and shows that he really is a racer's racer in wanting to make sure he made the field at Indy that night.  Too bad it ended so early for the tough ole guy who just can't seem to catch the break he deserves for being the oldest young man in the field this season after his return to racing in the Expert class last season. 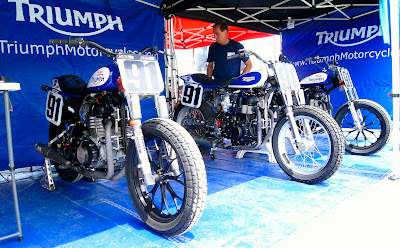 The Bonneville Performance Triumph team with rider Mikey Martin has been making bigger strides this season in making mains, and each race seem to be getting closer to running up front on the team's #91 Bonneville Performance/Factory Triumph Motorcycles/Castrol Oil-sponsored machines.  Martin made the main, but was forced off with an unreported mechanical just three laps for the finish, carding a 15th-place result.

In the shot above, team patriarch Bill Gately goes about readying the team's slick-looking mounts at Indy. 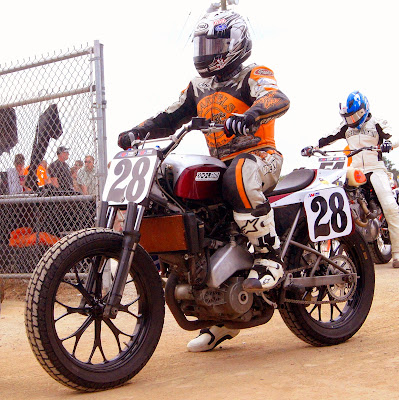 In his first of three appearances on the Lloyd Brothers Motorsports Aprilias, Shaun Russell was looking strong and fit at Indy after his super 4th-place finish the week before at Peoria.  LBM co-owner Dave Lloyd lent the use of the team's bikes, last campaigned by Aaron King two seasons ago, for Russell to run at Indy, and he will be appearing at both Springfield rounds next weekend, as his budget will allow.  The Danville, Illinois-area resident was looking great in his semi running at the front when he lost it and bounced off of the wall on the backstretch, thankfully unhurt but twisting the front forks beyond repair for the rest of the evening.  Look for SR28 on his self-sponsored Aprilia ride to be alongside the LBM guys at Springfield as he was at Indy, and with any luck, able to make the mains over the Labor Day weekend. 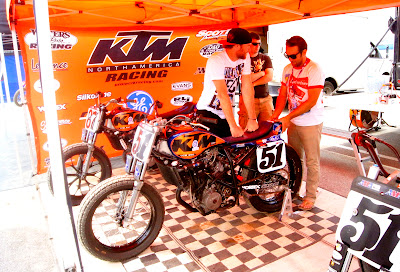 The Waters Auto Body/KTM Factory team gets ready for Indy with the appearance of fan-favorite and Australian Mick Kirkness on the team's KTM 990/950 LC8's alongside regular rider Steve Murray.  Kirkness had a rough night missing the main on the team's #87 KTM North America/GE Capital/Waters Auto Body-backed machine, and Murray had the tough luck award of the night (behind Ingram) in missing the main due to a rock that punctured his radiator in his semi. 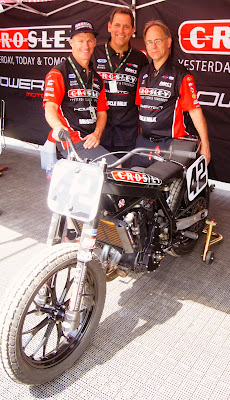 The three engine men that make up the Bryan Smith #42 Crosley Radio/Howerton Motorsports/Villa Esparaza-sponsored Kawasaki rocket, are all smiles as the day begins at Indy, as they were at the end of the day's activities after rider Flyin' Bryan cleaned house on the competition.

Since the premature death of engine builder Skip Eaken late last season, the Howerton team has taken their engine program in-house, and after their great results this season obviously haven't missed a beat, and if anything, have probably stepped-up their efforts in putting the maximum amount of ponies under Smith on the team's mile bikes.

In the shot above, team owner and master bike builder Rick Howerton, team helper and wrench Jeff Gordon and Dink Glidden show their pride in their lightning fast mount as they rally around what would be their winning bike at Indy. 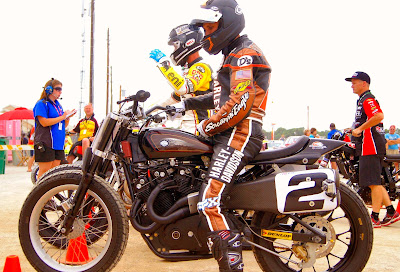 Coolbeth was sporting a gorgeous set of leathers matching the team's 110th Anniversary paint job that he took to a strong 6th-place finish at Indy. 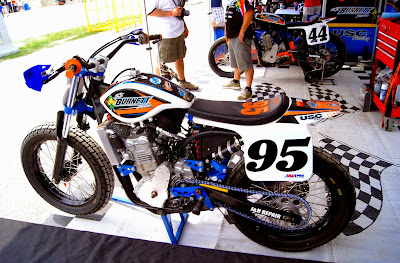 The TJ Burnett Farms/USC/Hart Racing team of JD Beach #95 and Brandon Robinson #44 had a solid night at Indy in spite of the way things started early in the day for rider BRob44.  After losing a motor in the first qualifying session, Robinson came back with a vengeance and brought home a stunning 2nd-place effort with a last-lap pass on 4th-place rider Jared Mees and 3rd-place finisher Brad Baker.  Beach, in his part-time gig for the team when he's not competing in the AMA Pro GoPro Daytona SportBike Series, looked strong all night as well and carded a 5th-place finish.

Team owner TJ Burnett was on-hand at Indy to help out the best he could after suffering kidney stone problems and eventual surgery in the Chicago area just days before the Indy round.  In spite of losing another motor on the year, the big guy from southern Illinois with a passion for the sport that is unparalleled was pretty happy with his team's results, even though he was going to have to dig deep in his pockets, again, to replace another blown motor. 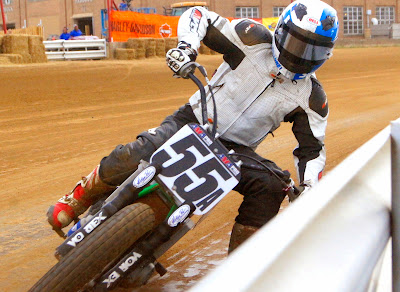 And finally, first year Expert Jake Shoemaker continues to impress in his rookie year in The Rolling Thunder Show.  Riding his #55A Montgomeryville Cycle Center/Motion Pro/MVD Race Wear-backed Kawasaki, the Pennsylvania resident brought home a 9th-place effort for his results at Indy.

Above, Jake is shown during final qualifying at Indy in turn one.


Although we're running behind with this and some of our other coverage, as we say, better late then never.

While you read the official press release recap below from AMA Pro Flat Track, we're also getting ready to see the series head to rounds 10 & 11 at the Springfield Mile this coming weekend, August 31-September 1 and are looking forward to the doubleheader on the Illinois State Fairgrounds mile oval that will be rocking the house after the Memorial Day weekend weather postponement.  Rock on!