Round 8 of the 2013 AMA Pro Flat Track presented by J&P Cycles Grand National Championship saw the stars of The Rolling Thunder Show hit the mile oval at the Indiana State Fairgrounds-hosted Indy Mile, and Bryan Smith on the #42 Crosley Radio/Howerton Motorsports Kawasaki made up for lost time this go around in winning every race he was in and running away with the 25-lap National main by over five seconds over runner-up Brandon Robinson.

Smith, who looked to have last year's race in the bag before a battery malfunction forced him out just past the mid-point of the final, more then made up for last year's malady as he cleaned out the house this go around to take his second win of the season in front of a packed house at Indy.

Starting with practice and qualifying (shown above in the final session of the afternoon running with 3rd-place finisher Brad Baker on the #12 Dodge Brothers Racing/Sefnco Communications XR750 in turn one), Flyin' Bryan took fast time over the 47 riders entered for the evening's event who took a qualifying time.

From there, the Michigan resident won the first heat of the night over Zanotti Racing's Steve Bonsey and Robinson, and then headed to the 4-lap Dash for Cash to help put his exclamation point on the evening by running away with the five extra points and the $1K that goes with it.

In the 25-lap National main, Smith set sail and it was all over within a few laps as he extended his lead throughout the night to win by 5.120 seconds over runner-up Robinson on the #44 TJ Burnett Farms/USC/Hart Racing Kawasaki. 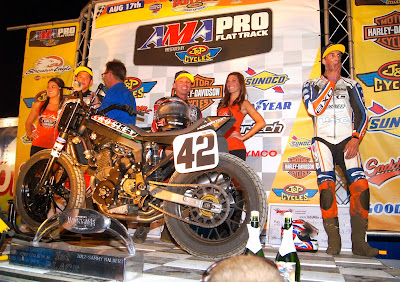 As 3rd-place finisher Brad Baker gets interviewed by AMA Pro Flat Track announcer Barry Boone on the victory podium, Smith beams after his great run at Indy while Robinson tries to cool down and relish in his 2nd-place effort and second-best finish of the season.

4th-place finisher Jared Mees leads the troops with just a couple of laps to go on the #1 Rogers Racing/Blue Springs XR750 with championship points leader Baker right alongside.

Robinson, who slowly but surely worked his ways towards the front after running in the bottom part of the top-6 early in the night, made the move of the race on the last lap coming out of turn two and held it until the checkers to take the 2nd-place slot on the podium.  Robinson stated he wasn't sure how he did it but just decided it was time to go, and helped to earn his second-best finish of the year and move him back into the 5th-place slot in the championship hunt after a rough last couple of weeks.  Well deserved man!

Baker rounded out the bo/ with his 3rd-place finish, and his eighth top-5 of the year (although his 2nd-place at Daytona II was disallowed due to improper fork usage), and extended his lead in the championship hunt to 33 points over runner-up Smith (155-122 points) with five rounds to go in the season.  Henry Wiles fell to third in the championship with 120 points after running a strong race on the #17 Lloyd Brothers Motorsports/Ramspur Winery H-D XR750 with a 7th-place finish.

Kenny Coolbeth, Jr. on the #2 Harley-Davidson Motor Co/Screamin' Eagle XR ran with this pack most of the evening before giving way to Robinson's team mate, JD Beach on the #95 TJ Burnett Farms Kawasaki, with Beach rounding out the top-5 and The King of Cool coming home in the 6th-place spot. 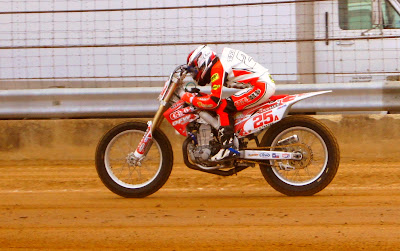 Shayna Texter took her second win of the season and the sixth of her promising and young career on the #25A Crosley Radio/DFW Honda CRF450R after making one of the strongest moves of the night in hunting down early leader Stephen Vanderkuur with just a few laps to go and swooping down and clipping his wings at the line by just .343 seconds.  Running in the 6th-place spot around the halfway part of the 16-lap J&P Cycles Pro Singles Championship final, the young lady from Pennsylvania showed her mastery of the mile in taking the win and wowing the crowd on hand, who went nuts after she took the checkers for another very popular win for her and her many fans in attendance.

Shayna is shown above during the first practice session of the day at Indy.


AMA Pro Flat Track has the full set of results which you can check out here.

And Dave Hoenig, the master of the lens for AMA Pro Flat Track, filed this album of shots from Indy.

With a lot going on right now, we'll have more on the great event for you to check out this weekend, as we shot it up and have more to talk about in all the happenings at the Indiana State Fairgrounds-hosted event.  We'll try to have some more out here by the end of the day on Saturday while we check out round 9 of the 2013 AMA Pro Flat Track presented by J&P Cycles Grand National Championship season as the series heads to Colonial Downs, Virginia for another mile race August 24.

And we would like to take the time to give a special thanks to Family Events/The Promotion Company's Leah Burdette and the great group of people who put on the Indy Mile this year.  They really went out of their way to take care of the press again this year, a wonderful media room, excellent parking and a great show all around.  Thanks again so much for helping to make Indy another super event and for treating us like kings and queens!

You can also read AMA Pro Flat Track's official press release below to see what transpired last Saturday under the lights at Indy.


INDIANAPOLIS, Ind. (August 17, 2013) - Flint, Michigan's Bryan Smith (Crosley Radio/Kawasaki) was as cool as the Indiana breeze Saturday night during Round 8 of AMA Pro Flat Track presented by J&P Cycles at the Indiana State Fairgrounds. Smith, who is famous for using the power of his Kawasaki to diminish the hopes of his competitors on mile-long circuits, proved worthy of his reputation once again tonight as he claimed victory by more than five full seconds over second-place finisher Brandon Robinson (TJ Burnett Farms/Kawasaki).
"This is just unbelievable," said Smith. "I've been racing here since I was 10 years old and now I'm one of the older guys. I probably have more laps logged than anybody here and it just feels great to get this win. This place is extra special to me for a lot of reasons. The fact that I'm part of the Howerton family just adds to all of this excitement. Everyone that's a part of my team is absolutely awesome and I couldn't take any of this credit without including them."
There was no stopping Smith at any point tonight, as he proved yet again that he is the fastest mile-long rider on American soil. Smith's breathtaking practice and qualifying results were early indications that he was going to be very sharp tonight. After convincing Heat 1 and Dash for Cash victories, all early assumptions were proved accurate as Smith came into the night's main event unanimously locked in as the clear-cut favorite to win his second mile of the year. 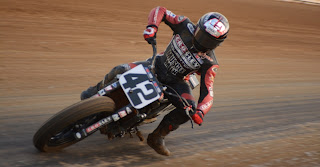 Bryan Smith on the #42 Crosley Radio/Howerton Motorsports Kawasaki took all the glory at the legendary Indy Mile by winning every race he was in on Saturday, August 17.  AMA Pro Flat Track photo by Dave Hoenig.
Though he was never in the hunt to compete with Smith, Robinson's second-place finish was nothing to cringe at as he had to battle it out with current Grand National Championship points leader and Eatonville, Washington native Brad Baker (Dodge Bros Racing/Harley-Davidson) for second. Robinson edged Baker on the final lap to earn second place for his best finish since winning Round 2 at Daytona earlier in the year.
Consistency is the name of Baker's game. Though he lost the battle for second to Robinson, Baker's third-place effort to round out the podium marks his eighth consecutive top-five finish in 2013.
Clio, Michigan product and defending Grand National Champion Jared Mees (Rogers Racing/Harley-Davidson) finished fourth and Philpot, Kentuckty's JD Beach took advantage of his GEICO Motorcycle AMA Pro Road Racing off-week and rounded out the top five with an impressive night all-around, winning his heat race and claiming fifth in the main event.
AMA Pro J&P Cycles Pro Singles
The AMA Pro J&P Cycles Pro Singles main event was decided late in the race when Willow Street, Pennsylvania's Shayna Texter (Crosley Radio/Honda) ripped the lead from Davison, Michigan's Stephen Vanderkuur (Parkinson Brothers Racing/Honda) as she hawked down the defending champion on lap nine. Texter would refuse to forfeit any ground for the final two laps as she closed out her second victory of the season.
"I knew I had to step up once I saw Vanderkuur put his head down and start to break away," said Texter. "I was in the mix with a big group of guys early on and I just wanted to break loose from it. I have to give hats off to my team for giving me a great bike. Two years ago, I was unable to attend this race because I was in the hospital with my father who eventually passed away. I'm dedicating this race to him."
Vanderkuur got the holeshot and the lead early on but the second Texter stole the lead from him, an ecstatic Indianapolis crowd rose to their feet, cheering on the female phenomenon every wheel of the way as she rode her 450cc motorcycle to victory.
Vanderkuur's second-place effort marks his best finish of the season and the reigning champion will look to carry over this momentum to the next event as he tries to defend his title.

Starting from fifth on the grid, Attica, New York's Cody Johncox (Sunnyside Cycle/Yamaha) was able to find his way onto the podium with a third-place finish after edging out fourth-place finisher and Brisbane, California's Dominic Colindres (Motorcycle Superstore/Honda) by almost two full seconds.

AMA Pro Flat Track presented by J&P Cycles is a national motorcycle racing series in North America and is considered one of the oldest forms of motorcycle racing. Sanctioned by AMA Pro Racing, the Series is highly regarded as the most competitive form of dirt track racing in the world. The 2013 schedule consists of rounds on the country's finest flat track courses. For more information on AMA Pro Flat Track presented by J&P Cycles, please visit www.amaproracing.com/ft.
Posted by Stuman714 in Indy at 9:48 PM