Round 6 of the 2013 AMA Pro Flat Track presented by J&P Cycles Grand National Championship season sees the stars of The Rolling Thunder Show set their Twins Series machines aside for the next couple of events, today starting with the Castle Rock TT in the Pacific Northwest.

Long one of the best-attended and promoted events on the schedule, Castle Rock fell off the schedule for several years after the devastation in the area from the Mt. Saint Helens volcano eruption in the early '80s.  But with the influx of riders competing in the greatest racing series on two wheels in the world, the event has returned to the top of the must-see bucket list of great races and tracks to attend.

Late this afternoon local boys Sammy Halbert and Brad Baker will lead the series into it's stretch run of events that start at Castle Rock, before heading back to the Midwest for next Sunday's longest currently-tenured event on the schedule at the Peoria TT.

Today's action at Castle Rock should surely bring some great action to the track, in spite of what now looks to be a fairly low rider entry list.  However, just like any race on The Rolling Thunder Show circuit, there are sure to be several additions and you have to remember it still only takes 18 riders to make up an AMA Grand National Championship main event, and it's always the racing itself and not the rider turnout that makes for a great program.

One of the big things on everyone's 'wtf?' list going into today's event at Castle Rock is the recent announcement that 2-Time AMA Grand National Champion Jake Johnson had parted company with the powerhouse Zanotti Racing team.  But the 2010-2011 AMA Grand National Champion will be in attendance today and will be making an announcement very soon as to his future endeavors in the sport.  And we must say, we're glad to hear that as of now he isn't 'retiring' like he mentioned the possibility of.  The sport NEEDS a champion and quality person around it like Jake Johnson, and he still has way too many years of winning ahead of him to walk away from the track!  You can see/hear more here thanks to Flat Track Live's Miriam Deitcher's on the spot interview with JJ last night at Castle Rock.

The weather is expected to hold out today at Castle Rock, so with any luck we won't see another rain out that seems to have been a force in several events this season--we're keeping our fingers crossed that Mother Nature is looking over us again today.

You can follow along here thanks to AMA Pro Flat Track with their event coverage and Live Timing and Streaming screens.

In the shot above, Sammy Halbert leads a mid-pack battle at the 2012 Peoria TT on his #7 Fredericktown Yamaha YZ450F over JD Beach on the #95 USC Racing Kawasaki KX450F, Brad Baker on his #12 Brothers Powersports Honda CRF450R, Briar Bauman on this #10Z Rod Lake Racing Honda and Rob Pearson on the #27 Memphis Shades Yamaha.

All are on the entry list for today's event at Castle Rock and should also be at next weekend's Peoria TT.

You can check out the press release below from AMA Pro Flat Track as you get ready to follow the action from today's Castle Rock TT romp!


CASTLE ROCK, Wash. (August 2, 2013) - Last weekend, the Sacramento Mile marked the beginning of a six-week stretch of seven AMA Pro Flat Track presented by J&P Cycles races. This weekend, the series jumps to the Pacific Northwest to Castle Rock, Wash. for the Castle Rock TT at Castle Rock Race Park on August 3, 2013. The event will demand a complete reversal of strategy for the Grand National Experts as they will put their two-cylinder motorcycles on the shelf and pull out their smaller, more dynamic 450cc machines.
As the season closes in on its midpoint, the AMA Pro Grand National Expert points race is led by Eatonville, Washington's Brad Baker (Dodge Bros Racing) as his three consecutive second-place finishes to begin the year followed by his first victory at the Grand National Expert level at Hagerstown and his fourth-place effort at Sacramento last weekend has placed him comfortably ahead of the field with 92 points to his credit. The 2011 Rookie of the Year will look to extend his lead in the points on his Honda CRF450R this weekend.
After a lackluster 17th place effort at Hagerstown in Round 4, Oxford, Pennsylvania's Brandon Robinson (TJ Burnett Farms) rebounded quite nicely last weekend with a third-place finish at the Sacramento Mile to help him maintain his second-place position in the points. Robinson will be happy to get back on his Kawasaki KX450F as his only win in 2013 came on the 450cc back in Round 2 at Daytona. 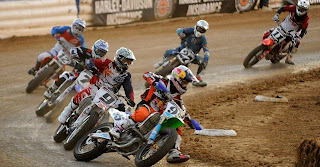 JD Beach #95 leads Jared Mees #9, Sammy Halbert #7, Brad Baker #12, Rob Pearson #27 and Scott Baker #11 during heat race #1 action at the Castle Rock TT on August 4, 2012.  The annual event at the Pacific Northwest track gets underway this afternoon with first practice scheduled for 6:30 PM ET/3:30 PM PT and the first Pro Singles heat rolls off this evening at 10:30 PM ET/7:30 PM PT.  AMA Pro Flat Track photo by Dave Hoenig.
Flint, Michigan product Bryan Smith (Crosley Radio) was able to blow by the elite competitors of the sport on the long front and back stretches last weekend to claim his first win in 2013 but the 30-year-old won't have that kind of luxury this weekend on the much shorter circuit. Smith's ability to be creative and find a different way to the front of the pack and maintain a competitive position will be tested this weekend on the .6 mile, six-turn dirt track.
Graham, Washington's Sammy Halbert (Fredericktown Yamaha) was last season's winner and has looked solid in all three races back since returning from injury. Halbert has climbed his way back to sixth in the Grand National Expert point standings after a win and two top-five finishes and will look to improve on that in front of his hometown crowd this weekend.
Clio, Michigan product and defending Grand National Champion Jared Mees (Montgomeryville Cycle) finally returned back to typical form last weekend with a second-place finish at Sacramento after injuries and bike malfunctions have dampened his season thus far. Mounted on his Honda CRF450R, Mees will look to roll that momentum over to this weekend as he looks to improve on his current eighth-place position in the points.
AMA Pro J&P Cycles Pro Singles
Much like the Grand National Experts, there are several J&P Cycles Pro Single riders who hail from the Northwest, but spend their summers chasing the national scene. Current points leader and Mead, Washington native Wyatt Maguire will be looking to strengthen his lead in the standings on his Yamaha YZ 450F. Maguire will be looking to bounce back after a rough 2012 appearance at Castle Rock Race Park as he finished almost dead last in the night's main event, coming in 17th.
Last season, Snohomish, Washington's Jacob Lehmann (Ride Motorsports) claimed his first career victory as a professional. This will be Lehmann's first race of 2013 and he will certainly be looking to repeat on his Honda CRF450R.
Coming fresh off of her first victory of 2013 at Sacramento, Willow Street, Pennsylvania's Shayna Texter (Crosley Radio) is always a threat to win and will be on the attack at Castle Rock this weekend.
Texter has been a wildcard all season long, finishing outside the top ten in three of the five races yet claiming victory last weekend and a second place effort at the Stockton Half-Mile earlier in the year has helped her solidify a fourth place position in the current point standings heading into the match this weekend.
How to Catch the Action
Tickets are still available for this weekend's AMA Pro Flat Track event at Castle Rock Race Park in Castle Rock, Wash. For more information, please visit http://www.showclix.com/event/mshmc.
Fans that are unable to attend the Castle Rock TT are encouraged to tune into AMA Pro Live. The live streaming devices will put fans in the director's chair, allowing for complete viewing of the event. From the first practice all the way up until the final checkered flag is dropped, tune in to AMA Pro Live to catch all of the action.
About AMA Pro Flat Track presented by J&P Cycles
America and is considered one of the oldest forms of motorcycle racing. Sanctioned by AMA Pro Racing, the Series is highly regarded as the most competitive form of dirt track racing in the world. The 2013 schedule consists of rounds on the country's finest flat track courses. For more information on AMA Pro Flat Track presented by J&P Cycles, please visit http://www.amaproracing.com/ft/.
Posted by Stuman714 in Indy at 1:24 PM