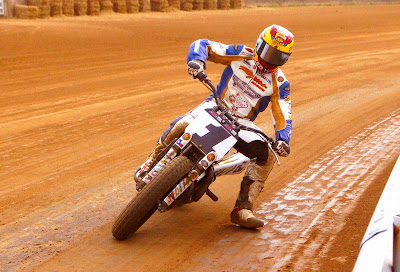 Round 9 of the 2013 AMA Pro Flat Track presented by J&P Cycles Grand National Championship season saw the stars of The Rolling Thunder Show head to the Colonial Downs Raceway in New Kent, VA. for an event that would be held on the longest track that the series has ever encountered in modern times and in recent history.

Measuring 1 1/4 miles in length, the massive track that sits just east of Richmond, VA. is normally used as a horse racing facility, and not only the size of the venue proved trying for the teams and riders, but the dusty conditions that existed even a day after a complete soaking by Mother Nature.

Many a team encountered some sort of problem due to those conditions, and several of the top teams and riders also suffered major mechanical failures, or even multiple failures, throughout the day's events.  Most notable among those were current overall points leader Brad Baker losing two motors on his #12 Dodge Brothers Racing H-D XR750, one of which was suffered during the shortened 18-lap National main which took The Bullet out of the running early and relegated him to a 19th-place finish.  And expected event winner Bryan Smith, on the #42 Crosley Radio/Howerton Motorsports Kawasaki rocket was also cursed with an unknown electrical malady that caused his EX650-based mount to falter down the stretch, come back to fire and allow him to finish the final, but well down in 12th-place after running away with the early part of the program and opening laps of the main.

But those that did benefit from the downfall of others, as well as prosper on the wide-open track made for quite a show, and the one that came away the top dog on the day was defending AMA Grand National Champion Jared Mees on the #1 Rogers Racing/Blue Springs/Las Vegas H-D-sponsored XR750.

Mees was able to capitalize on the misfortunes of the early leaders and hang in for his first win of the season, his second mile win of his career (Springfield Mile I 2011) and the first race win for his new tuner, Kenny Tolbert.  After the year that Mees has had in terms of injuries, including the broken arm that his still healing from his practice crash in Ashland, OH. in mid June as well as his dislocated shoulder suffered during the Castle Rock event several weeks ago, The Jammer hung tough to scoop up the fixings at the Mega-Mile and mega event held at Colonial Downs.

In the shot above, Mees can be seen during the final round of qualifying on the #1 Rogers Racing XR at the Indy Mile on August 17.

After a decent but tough weekend overall for the Lloyd Brothers Motorsports team the week previous at the legendary Indy Mile, misfortunes were overcome as the #17 Lloyd Brothers/Ramspur Winery/Foremost Insurance Group-backed Ducati of the 2-Time AMA Grand National Singles Series Champion found the high line and the rev line to pass everyone in the field after being relegated to a fourth-row start due to suspected electrical problems right before taking his sighting lap.

Wiles opted for the fourth-row and lone spot behind the field in case the miss on the big red Duc wouldn't clear out, and found out quickly that whatever caused the big 'L-twin' to misfire quickly cleared out and was Hammerin at full rev once underway.  From that point, Hammerin Hank did what he is famous for, and took off for the front, and only managed to miss the Rogers Racing XR of winner Mees when the field in the 18-lap National had seen the checkers fly, and had actually gotten to within just shy of 2 seconds of The Jammer at the race's end.

And new team mate Jake Johnson, after having two mounts go south on him at Indy in his heat and semi and being forced to start the Indiana State Fairgrounds-hosted event on a provisional, was able to regroup for a solid 7th-place finish in Virginia in his second ride for the Ohio/Indiana and Michigan-based LBM team.

Not a bad weekend overall for the boys and with Springfield coming up in less then 48 hours, the rest of the teams and riders now have to wonder if the LBM camp will find their full stride come race time Saturday afternoon.  If they do, there are a couple of expected winners for the SF Mile I & II events that may start to sweat if it does, and could happen.

In the shot above, Henry can be seen talking with one of the LBM crew (middle, left of center) as the rest of the team goes about their duties prior to the first round of practice at Indy on August 17.  Even the team co-owners can be seen getting wild and crazy with the wrenches in the heat of the action, which shows you the dedication these guys have for their riders and team, let alone the sport.  Either that or they want to make sure and keep new crew chief Brent Armbruster (kneeling, second from left working on Jake Johnson's bike) honest and on his toes. 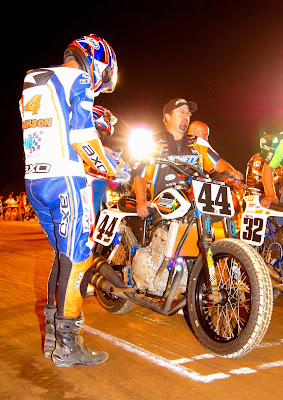 TJ Burnett Farms Kawasaki rider Brandon Robinson rounded out the podium at Colonial Downs and made it two-for-two in as many races for landing on the podium after taking a fall in his heat race on the #44 TJ Burnett Farms/USC/James Hart Racing Kawasaki EX650.  While leading in his heat, BRob44 came out of turn 4 and did a low slide that turned him and his mount around in front of the pack.

Thankfully, no harm, no foul as the too tall rider out of Pennsylvania again showed strong form and big b...s to come back in the final to card his fourth podium and fifth top-5 of the season.  "I've never been to a track where we ran wide open, feet on the pegs and throttle pegged like we did at Colonial Downs and I had some fun," stated BRob44 after the weekend's events.  And his results showed after nailing down another spot on the box for the Southern Illinois-based team owned by one of the strongest and biggest fans of AMA Pro Flat Track.

Team owner TJ Burnett, who missed making the trip to Virginia, was in Indy just a day after going under the knife for kidney stone surgery on his return from the Great Northwest swing earlier in the week.  Not expecting to make it to Indy after his surgery, the big man from Illinois was on-hand at Indy and hanging tough for someone who just hours earlier had been in a hospital bed in the Chicago area.  To give you an idea of how tough and dedicated this guy is, he stated that he was more 'torn up about the loss of the motor' at Indy that Brandon suffered then he was about healing up after his surgery.  "I can handle the healing, it's losing the motor like that that hurts me," stated the likeable farmer and flat track team owner during the Indy weekend.  Now that's dedication!

In the shot above, Robinson and his crew chief, James Hart, line up the roaring Burnett Kawi on the second row at Indy prior to the start of the night's National main on August 17.  Hart, who has done more then his share of work this year in rebuilding lost motors and tracking down several mechanical ills suffered throughout the season, is just as calm, cool and collected as he looks in this shot and does a superb job of keeping BRob44 and the team's rocket roosters in check, and does a darn good job of it.

With the series heading to Springfield for rounds 10 & 11 of the 2013 AMA Pro Flat Track presented by J&P Cycles Grand National Championship season this weekend, it's go or go home time for all of the teams and riders in the greatest racing show on two wheels in the world.  With the two Springfield Miles, Santa Rosa and the season ender in Pomona, it's time to get it together as the season is winding down quickly.

While you ready yourself for one of the biggest and best weekend's in racing, you can also read Larry Lawrence's great article in Cycle News from Colonial Downs to help get you geared up for what will be another stellar weekend of racing at the Illinois State Fairgrounds mile oval.