INDIANAPOLIS, Ind. (August 13, 2013) - With the five races of thrilling and often unexpected qualifying rounds completed, the XR Showdown that will determine the 2013 AMA Pro Vance & Hines Harley-Davidson Series champion is finally set to kick off this weekend at the Red Bull Indianapolis GP.
The AMA Pro Vance & Hines Harley-Davidson Series will take center stage before a massive audience this weekend as it shares the spotlight with the MotoGP World Championship at the famed Brickyard for a critical contest.
With only four races to decide this year's champion in the $60,000 XR Showdown, and the top ten qualifiers all effectively restarting their title pursuits from scratch, reset to 1,000 points apiece, the Indianapolis doubleheader is undoubtedly the single most important race meeting of the year for the Harley-Davidson contenders. A huge weekend in Indianapolis could put any of the ten in the driver's seat, and by the same token, all but eliminate one of the title favorites from contention should it all go wrong. The stakes could not be any higher. 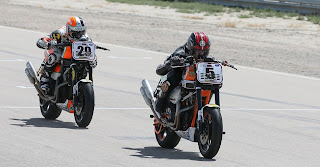