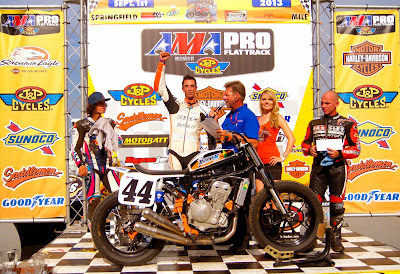 Brandon Robinson acknowledges the crowd after taking a repeat win in round 11 of the 2013 AMA Pro Flat Track presented by J&P Cycles Grand National Championship at the Springfield Mile II on Sunday, September 1.  Robinson rode the wheels off of his #44 TJ Burnett Farms/USC/James Hart Racing-sponsored Kawasaki to take his second win at the Illinois State Fairgrounds-hosted event in as many days, repeating what he had accomplished just shy of 24 hours earlier to earn his third career victory of his career and the season.

The podium may have looked the same as the day prior with Bryan Smith coming home in 2nd-place aboard the #42 Crosley Radio/Howerton Motorsports Kawasaki and Robinson's team mate on the TJ Burnett Farms team, JD Beach getting 3rd on the team's other Kawasaki, but the outcome came about in a much different way than what the previous day's race had.

Robinson, who stole the show again from the start of the day with fast time, winning his heat for the fastest time of the day to claim pole and then winning the 4-lap Dash for Cash, actually had to work for this one in leading 14 laps of the 25-lap National main, whereas in Saturday's Springfield Mile I once he had gotten around team mate Beach on the 6th lap, he was gone.

The battle at the front see-sawed back and forth between Smith, Robinson and team Harley-Davidson's factory XR pilot, Kenny Coolbeth, Jr. throughout the afternoon, with Robinson gaining the advantage at the stripe for 14 of the 25 go-arounds, and the one that counted.  Smith led all but one of the remaining laps while Coolbeth took the point on lap 10 crossing the line.

But the battle raged throughout the lead pack of Robinson, Smith, Beach, Jared Mees, current points leader Brad Baker and Coolbeth all around the huge Illinois State Fairgrounds mile oval, and it was an exciting one, to say the least.  Robinson's winning gap at the end over Smith was a mere .202 seconds with another .072 seconds back to team mate Beach, whereas Robinson checked out in Saturday's event to win by just over 5.2 seconds.

The top-6 traded spots all over the track, but it was Robinson leading 14 laps, Smith 10 and Coolbeth one lap that counted at the stripe. Behind Beach, the gap to Coolbeth was .096 seconds, another .035 to Baker and .014 to 6th-place finisher Mees.

The battle for the 7th through 12th place in the 25-lap National main was contested by this group of riders once the battle started to heat up just past the 20 lap mark.

At that point, Jake Shoemaker in his great rookie year on the #55A Montgomeryville Cycle Center/Motion Pro/MVD Race Wear-sponsored Kawasaki was out with an undisclosed mechanical, leaving Jake Johnson on the #5 Lloyd Brothers Motorsports/Ramspur Winery/Foremost Insurance-sponsored Ducati, Jeffrey Carver, Jr. on the #23 Kiesow Racing/Eddie Adkins/Carver's BBQ-backed XR, Willie McCoy on his #59 H-D of Wausau/Independence H-D/Tucker Rocky XR, Henry Wiles on the #17 Lloyd Brothers Motorsports/Ramspur Winery/Foremost Insurance-backed XR750, Doug Lawrence on the #73 R&J Racing/CVC Communication Agency/American H-D-sponsored XR and Steve Bonsey on the #80 Zanotti Racing/RGR/Arai-sponsored XR750 to battle it out.

This second pack of riders made the race look like two big races in one event as they battled back and forth for the final laps, creating one of the most exciting finishes that the legendary Springfield Mile track is accustomed to.  If fans didn't like this one, they better be checking their pulses today. 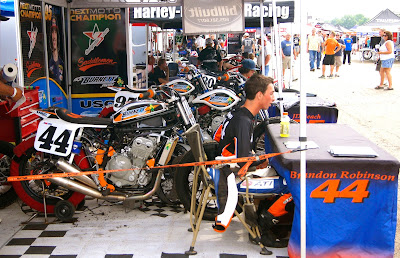 TJ Burnett Farms team mates Brandon Robinson and JD Beach await the fan walk crowds on Sunday at the Springfield Mile II.  The teamsters again sandwiched the Howerton Motorsports Kawasaki of Bryan Smith as they had the previous day to make it two Kawasaki sweeps of the podium in two days.

After the win, Robinson took his Dad for a victory ride and was pretty emotional as he rode around the big oval, as was the whole TJ Burnett Farms team.  Taking their second win in as many events and days, the down to earth owner and team members were finally able to sit back and enjoy their victories of the weekend and share the fun with their fans that stopped by after the main had long been completed, and enjoying every moment of it--understandably so.

It was also the first big track wins for engine builder to the stars, Woody Kyle of Woody Kyle Racing.  The long time engine builder who has been involved in flat track racing for several decades, has been known for his short track and TT-machine builds, but had never had a winning combination in the Twins Series events.  This one doubled his fun, and he was very happy and humbled to have it happen, let alone at Springfield, and I was honored to be able to chat with him and his lovely wife for a few moments after the race to congratulate him on his and the TJ Burnett Farms team's great accomplishment.

With a break in the schedule for the next few weeks, the riders and teams have a chance to regroup after four big mile events in three weeks' time and to get their equipment dialed in for the west coast swing of the two remaining races.

Heading to round 12 of the 2013 AMA Pro Flat Track presented by J&P Cycles Grand National Championship season at the Santa Rose Mile on September 29, Brad Baker still holds down the overall points lead with 184 points, Bryan Smith in the runner-up spot ten points back, Robinson now in the 3rd-place spot just 13 points behind Baker, Wiles dropping to 4th-place with 159 points and Mees now rounding out the top-5 with 158 points for what will undoubtedly be an exciting finish to the season for the west coast fans on hand in the two remaining rounds.

You can see the full event results here, and also check out Miriam's winning interview with Brandon Robinson on Flat Track Live here, Larry Lawrence's race re-cap on Cycle News here, and finally the local Springfield paper also had a nice write-up on the race which you can check out here.


SPRINGFIELD, Ill. (September 1, 2013) - When you're hot, you're hot. After winning Saturday's AMA Pro Flat Track presented by J&P Cycles Grand National Expert Twins main event at the Illinois State Fairgrounds, Brandon Robinson (TJ Burnett Farms/Kawasaki) proved he wasn't done yet as the Oxford, Pa. product completed the perfect weekend with another Springfield Mile victory on Sunday to close out the Labor Day weekend doubleheader. This time, however, victory didn't come so easy for Robinson, as the 23-year-old had to fend off fierce competitors on every lap in order to clinch his third GNC victory in 2013. 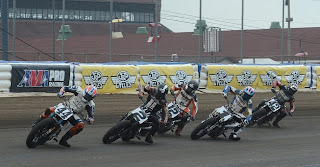