MONTEREY, Calif. (September 28, 2013) - Monster Energy/Graves/Yamaha's Josh Hayes completed his perfect season sweep of AMA Pro National Guard SuperBike pole positions Saturday at Mazda Raceway Laguna Seca. However, despite securing his eighth pole in as many attempts -- and now in search of his eighth win of 2013 in Sunday's season finale -- it's actually teammate Josh Herrin who stands as the man in command. Hayes earned his final pole based on the strength of his Friday time of 1:24.249, but also led the way in Saturday's second qualifying session with a similarly quick lap of 1:24.328. The defending triple champion will be joined on tomorrow's FIM-style three-man front row, as utilized by the FIM Superbike World Championship, by his fellow title contenders, points leader Herrin and Yoshimura Suzuki Factory Racing's Martin Cardenas. 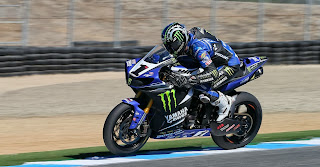 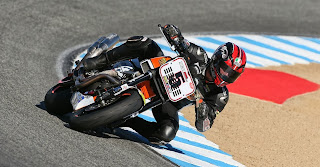 Steve Rapp on the #5 Aerostar Global/Suburban H-D-sponsored XR1200 took his 6th win of the season at the season finale round in the AMA Pro Vance & Hines Harley-Davidson Series at Laguna Seca by just shy of 6 seconds to secure his first Geico Motorcycle AMA Pro Road Racing championship of his career.  AMA Pro Road Racing photo by Brian J. Nelson.
The veteran AMA Pro star, who entered Saturday's finale with a healthy 23-point advantage after taking pole earlier in the day, ripped open a 1.233-second advantage on the race's opening lap and he only piled it on from there. He never put a wheel wrong despite the immense pressure of racing towards his first AMA Pro title. Rapp gradually widened the gap to over seven seconds before cruising on the race's final two laps to a margin of victory just under six seconds.
The 41-year-old racer said, "It's just a dream. I didn't even think I'd be able to race with some new things in my life with work and what-not. Thanks to the guys from Suburban Motors, they took me in and gave me an awesome bike and team... It's a culmination of 15 years of a lot of hard work and a lot of trials and tribulations and a lot of things that go along with it. It's just great to finally do it, and do it here at home in front of a lot of friends and family."
Once again, there was significant drama behind the all-conquering Rapp in the struggle to determine second.
Eco Fuel Saver/Scrubblade's Tyler O'Hara's 'A' bike suffered an engine problem on the warm-up lap. The race was momentarily delayed as a result, allowing O'Hara to hitch a ride back down to the grid and jump on his back-up bike. However, he was forced to start from the back of the field rather than the spot he earned on the front row. Undaunted, O'Hara slashed up to eighth on the race's first lap and continued his charge through the field from there, finally arriving in second with a three-man overtaking maneuver entering the Corkscrew on lap 4 of 11. After that, he fended off the repeated advances of Rapp's Suburban teammate, Ben Carlson, and young Hayden Schultz (Kyle Wyman Racing), who raced in a tight pack that also included Spyke's Harley-Davidson's 2012 champ Michael Barnes and Folsom Harley-Davidson's Gage McAllister.
O'Hara held on for second at the flag (and overtook Harv's Harley Davidson's Travis Wyman as the XR Showdown runner-up), with Carlson and Schultz close behind in third and fourth, respectively. Barnes finished fifth, while McAllister fell off the podium pack but still finished safely in sixth. Wyman was a distant seventh with Thrashed Bike Racing's David Estok, Ruthless Racing Inc.'s Darren James, and MOB Racing's Shane Narbonne rounding out the finale top 10.
About GEICO Motorcycle AMA Pro Road Racing
GEICO Motorcycle AMA Pro Road Racing is the premier motorcycle road racing series in North America and is universally regarded as one of the most competitive road racing organizations in the world. The 2013 schedule consists of nine rounds of competition on the country's finest road courses. The Series is comprised of four production-based classes: AMA Pro National Guard SuperBike, AMA Pro GoPro Daytona SportBike, AMA Pro Motorcycle-Superstore.com SuperSport and the AMA Pro Vance & Hines Harley-Davidson Series. Learn more about GEICO Motorcycle AMA Pro Road Racing at www.amaproracing.com/rr/.