Over 30 riders had signed up on the pre-entry list to contest the race, a tribute to the popular marque that dictated AMA Pro Flat Track competition in the sport's hey-day in the late '60s throughout the '70s. Riders including Morehead, '00 AMA Grand National Champion Joe Kopp, 3-Time AMA Grand National Champion Jay Springsteen, Garth Brow, David 'Bones' Aldana, 6-Time VDTRA Champion 'Wild Will' Kelley and a host of others all arrived to do battle on Indy's southeast side.


The Marion County Fairgrounds-hosted event, sponsored by Harley-Davidson of Bloomington, was the first of it's kind at the great little facility, and the riders that came from near and far all seemed to love and enjoy their time on the track, and riding some of the Bultaco Astros that many had utilized in short track racing throughout their careers.


But it was Morehead who stole the show, in spite of the best efforts from many including Springsteen, Aldana, Brow, Atherton and runner-up Morgan. Morehead ran away after the first lap and never looked back to take the checkered flag in front of a big crowd at Mid-America and a big handful of adoring fans who obviously remembered the pressure the Ohio resident used to put on the competition in his days racing in Grand National Championship events.


Aldana, who had made the trip to Indy via the Stockton, KS. fair races the weekend prior, showed up at the track with a rolling race shop in the form of a 20-foot 'v' nose trailer behind his Ford pickup, housing not only his four Honda 350 singles flat trackers but a well-organized shop complete with everything to tear into a motor, hone a cylinder and weld and repair pretty much any damages that could incur while racing. This man has been doing this a long time, and ole 'Bones' had a shop that some present-day young racers would be envious of.


Steve Morehead battles with former AMA Grand National #15 Garth Brow at Mid-America in their Bultaco Astro Cup heat race (above), one of the first of the evening. Brow got the jump off the start, but the 58 year old Morehead kept on his tail and made a daring but excellent move up the inside coming out of turn 2 on lap 2 and was never headed from there.
Little known fact: Morehead still fits into his leathers that he wore in AMA Grand National competition up until his retirement after the 1999 season, and they still look almost-new. The AMA Hall of Famer spent 26 seasons contesting the AMA Grand National Championship Series and when he retired, he was ranked 10th in the all-time wins list of competition. 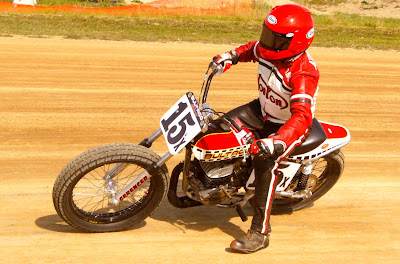 White Pigeon, MI. resident Dave Atherton (the father of former AMA Grand National #23 Kevin 'Cupcake' Atherton and Brad Baker's tuner on the Dodge Brothers Racing team in the AMA GNC Series) ended up in the 3rd-place spot in the BAC main on one of his pristine machines he brought to the track from his home. Atherton is known to have a pole barn full of vintage racers at home and this one was a beauty.

Art 'The Dart' Randall leads Brow #15 coming out of turn 4 during one of the event's early practice sessions. Randall, a long time supporter of flat track racing, made the trip to Indy from his home in St. Louis, along with close to a dozen of his Bultaco Astros in his collection, which he helped to supply some of the riders with for the event. Art owns a restaurant and pub in St. Louis close to Busch Stadium called 'Kilroy's' which houses several of his spotless machines that are on display. If you get the chance to make a Cardinals game (the only time that Kilroy's is open) make sure you stop by to check out part of his museum on display. 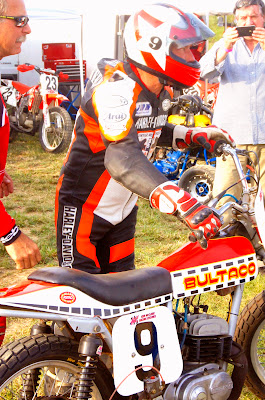 One of the all-time crowd favorites gets ready to head out for one of the evening's practices as Mid-America. Former 3-Time AMA Grand National Champion Jay Springsteen had one of the biggest crowds of people hovering around him wherever he went that evening, other than fan-favorite Aldana. 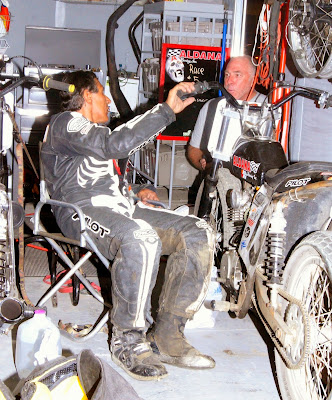 Aldana talks in his rolling transporter and shop with one of his many fans during a break in the on-track action at Mid-America. 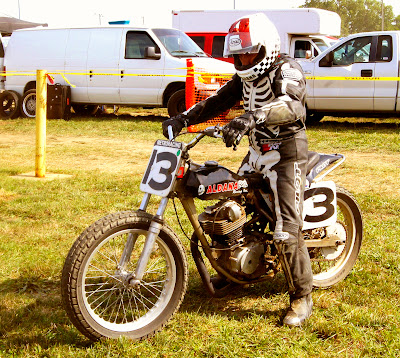 Dave 'Bones' Aldana gets ready to head out for practice for the Vintage 60+ class at Mid-America on one of his Honda 350 single machines. Aldana won his heat and main going away, each by just shy of a straightaway, masterfully taking the lead right off the bat in turn one and running away, never bothering to look back.


The crowd enjoyed seeing one of the all-time greats of the sport show up, including this fan, as I had the pleasure of hosting the Fayetteville, GA. resident over the weekend, and man were there some stories to be told and heard. 'Bones' spent time the next evening at the Indy Mile as the race's Grand Marshal, a race he won during the 1970 season while riding for the BSA factory, when the event was a 30-lap mile event. 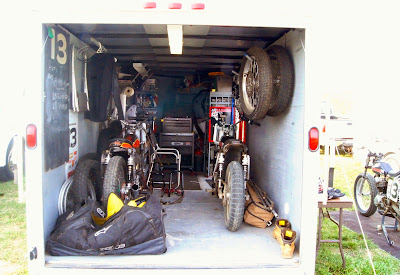 Aldana's rolling race shop as seen from the rear, with a glimpse of one of two of his machines he raced and practiced on at Mid-America sitting off to the side on the right. Aldana stated he could do everything including rebuilding a bike's engine and honing a cylinder if necessary, complete with a bench vise, extra spares, welder and torches. 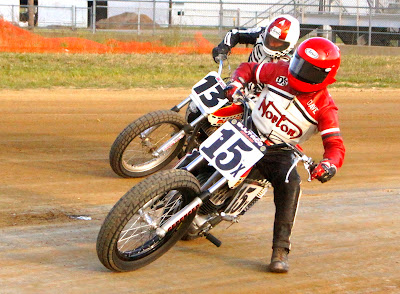 Dave Atherton #15x and Dave 'Bones' Aldana #13 mix it up during one of the heat races for the Bultaco Astro Cup event, part of round 10 of the 2013 AMA Vintage Dirt Track National Championship Series held at Mid-America this year for the first time. Atherton was on one of his machines while Aldana was on a borrowed mount from Ken McGuire, who also showed up with a host of Bultacos for the event. 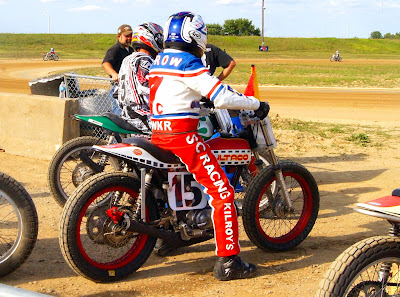 Summerville, SC's Garth Brow gets ready to head out for one of Mid-America's Bultaco Astro Cup practice sessions. Brow made the trip from his home in the southeast and ended up finishing in the 13th-place spot while battling a suspected electrical malady that hurt his finishing position in both his heat, semi and main results.

Riders line up for the Bultaco Astro Cup main event at the Marion County Fairgrounds-hosted event on Indy's southeast side, including former 2000 AMA Grand National Champion Joe Kopp, Aldana on the #13 Astro and Springer, just behind Aldana, on the #9 mount. Other than the textbook runaway put in by winner Morehead, Springer and Aldana had the crowd roaring over their battle for the 4th-place spot in the main. Springer got the nod, with 'Bone's finishing in the 5th-place position. Although Kopp had never ridden a two-stroke machine fitted with a compression release, the former AMA Grand National Champion had no problem adapting and won his heat right off. Kopp ended up with an 11th-place finish in the BAC main event.


All in all, Mid-America Speedway's hosting of the 2013 'Night Before the Indy Mile' was a big success for team operations head/track president Jim Terchila and his team. With a big crowd on hand for the large racing weekend in town for the 6th Annual Red Bull Indianapolis MotoGP event, round 8 of the 2013 AMA Pro Flat Track presented by J&P Cycles Grand National Championship, the stunt show and Motorcycles on Meridian being held each evening in the downtown area, fans had a lot of choices in which to spend their hard-earned money and time over the weekend.

Those that attended the 'Night Before the Indy Mile' at Mid-America weren't disappointed and saw some of the past, present and future stars of flat track put on a great show that won't soon be forgotten, and many should now be making plans to return for the 2014 version to be held at Mid-America Speedway on Indy's southeast side. 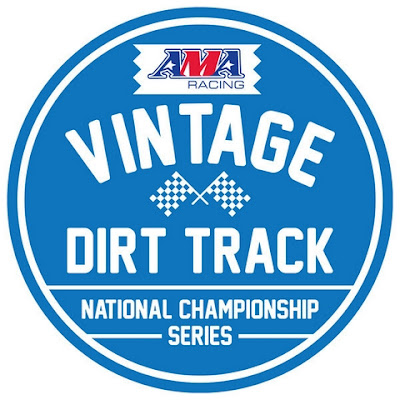