DAYTONA BEACH, Fla. (September 24, 2013) - An unforgettable AMA Pro National Guard SuperBike title fight will finally be decided in this weekend's 2013 GEICO Motorcycle AMA Pro Road Racing season finale at Mazda Raceway Laguna Seca in Monterey, Calif.
Running alongside the series' international counterparts of the FIM Superbike World Championship, the event will have all the requisite pomp and circumstance befitting a coronation. And after multiple shocking turns and the resultant shifts in momentum, the '13 championship appears all but decided at this point with a new king on the verge of being crowned -- that is unless this unpredictable campaign has one final surprise yet to spring.
Josh Herrin (No. 2 Monster Energy Graves Yamaha YZF-R1) holds a commanding position heading into the finale. He boasts a 22-point advantage over teammate and defending triple champion Josh Hayes (No. 1 Monster Energy Graves Yamaha YZF-R1) and a 23-point advantage over Martin Cardenas (No. 36 Yoshimura Suzuki Factory Racing Suzuki GSX-R1000) -- the only other riders still in contention. 23-year-old Herrin assembled that lead through an impressive combination of consistency, continual improvement, and clutch, aggressive riding when the chips were down. The rising star has racked up 11 podium finishes this season, highlighted by four victories on the year and no finish lower than sixth. All Herrin needs to do is continue that same sort of form at the finale; he needs to finish just 10th or better to claim the championship should Hayes go perfect this weekend (as he did earlier this year when the series first travelled to Mazda Raceway Laguna Seca) or 12th or better should Cardenas step up and sweep the weekend. 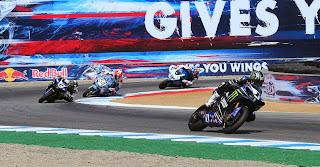 Josh Hayes on the #2 Monster Energy/Graves Motorsports Yamaha YZF-R1 leads team mate Josh Herrin #2, Roger Hayden on the #54 National Guard/Jordan Motorsports Suzuki GSX-R1000 and Martin Cardenas on the #36 Yoshimura Factory Suzuki earlier in the 2013 season at Laguna Seca during the AMA Pro National Guard SuperBike Series.  Hayes' team mate Herrin looks to unseat the 3-Time AMA SuperBike Champion this weekend in the series' season finale in Monterey, CA. AMA Pro Road Racing photo by Brian J. Nelson.
Herrin demonstrated his ability to come up big when it matters the most in a thrilling Race 1 dogfight at New Jersey Motorsports Park. Should he complete his quest, that race could go down as the season's pivotal race, as he slashed past Cardenas in the race's final corner to not only steal away the win, but also the lap leader bonus point and the championship tiebreaker while shuffling the Colombian down to third at the line in the process. Herrin followed his teammate across the stripe but aware that the Mississippian had been assessed a five-second penalty for anticipating the start, and accepted his fourth win of the season.
Had Cardenas held on for that win, the Suzuki pilot would enter the season finale in control of his own destiny, able to claim his first SuperBike title with a perfect points haul weekend and a Herrin runner-up on a tiebreaker. Similarly, if Hayes hadn't been hit with his third jump start infraction of the season, he'd be in position to score an unprecedented fourth-straight SuperBike title with a win and one bonus point (either pole or lap leader) in the event of a Herrin second-place result. Instead, Herrin only needs to avoid disaster. Should he succeed and end Hayes' reign, he'll replicate the feat of AMA Pro National Guard SuperBike legend, Ben Spies, who, in his second season in the premier class, defeated his all-conquering teammate, Mat Mladin, to snap the Australian's run of consecutive championships at three.
However, while the odds are stacked in the young Yamaha pilot's favor, this season has been defined by those sorts of unexpected moments. Hayes carried his dominating form of 2012 into 2013 and has maintained a decided edge in terms of sheer pace all season long. But his title defense has been repeatedly upended due to one setback or another. While some of those were of his own making (the three jump starts and a crash out of the race lead at Miller Motorsports Park), Hayes has also been hit by a series of mechanical issues, including a pair of mechanical retirements at Daytona International Raceway suffered while leading, and three electronic malfunctions at New Jersey Motorsports Park (two times in qualifying, once early in the race). Riding an identically prepared works YZF-R1, Herrin also suffered an electrical issue with his bike at the start of Saturday's NJMP race.
In other words, this one isn't over until it's over.
The Michael Jordan Motorsports duo of Roger Hayden (No. 54 National Guard Jordan Suzuki GSX-R1000) and Danny Eslick (No. 23 Jordan Suzuki GSX-R1000) will finish the 2013 season ranked fourth and fifth, respectively. Mathematically eliminated from title contention at New Jersey Motorsports Park and out of reach of sixth-ranked Larry Pegram (No. 72 Pegram Racing Yamaha YZF-R1), Hayden and Eslick will join former AMA Pro National Guard SuperBike star Blake Young in defending the host nation's honor in this weekend's World Superbike doubleheader. Pegram, meanwhile, will look to end a season that started off so promisingly on a high note. Pegram opened the year with a pair of Daytona podiums, results he backed up with a pair of top fives taken at the following two race weekends. However, the Ohioan hasn't been in the top five since. In fact, Pegram is in real danger of losing his final championship ranking to Chris Fillmore (No. 11 KTM/HMC Racing KTM RC8R), Geoff May (No. 99 Team Hero EBR 1190RS) or both. Fillmore is actually tied with Pegram in terms of points (169 apiece), while May is only eight back at 161, and both riders have been collecting top fives over the season's second half on their improving twin-cylinder machines. There's one final positional battle in the top ten as former SuperBike championship runner-up Aaron Yates (No. 20 Team AMSOIL/Hero EBR 1190RS) and ultra-consistent privateer David Anthony (No. 25 Motosport.com Motul Fly Racing Suzuki GSX-R1000) are locked in at 146 points. Yates currently holds down ninth with a best race result of sixth and Anthony tenth with a best finish of seventh.
Stay connected with GEICO Motorcycle AMA Pro Road Racing on social media at http://twitter.com/AMAProSBK and http://www.facebook.com/AMAProRoadRacing.
About GEICO Motorcycle AMA Pro Road Racing:
GEICO Motorcycle AMA Pro Road Racing is the premier motorcycle road racing series in North America and is universally regarded as one of the most competitive road racing organizations in the world. The 2013 schedule consists of nine rounds of competition on the country's finest road courses. The Series is comprised of four production-based classes: AMA Pro National Guard SuperBike, AMA Pro GoPro Daytona SportBike, AMA Pro Motorcycle-Superstore.com SuperSport and the AMA Pro Vance & Hines Harley-Davidson Series. Learn more about GEICO Motorcycle AMA Pro Road Racing at www.amaproracing.com/rr/.
Posted by Stuman714 in Indy at 7:51 PM