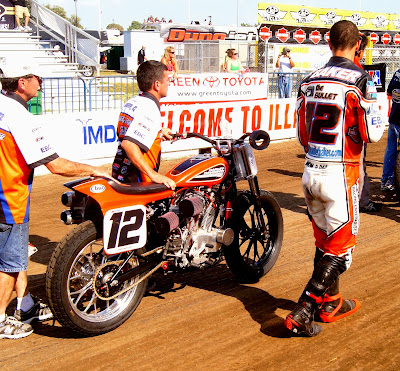 Round 12 of the 2013 AMA Pro Flat Track presented by J&P Cycles Grand National Championship season at the Santa Rosa Mile started off with a bang yesterday, but by day's end the clouds had moved in and forced the officials to make a tough call to cancel the National mains in both the Grand National Expert Twins class as well as the J&P Cycles Pro Singles class.

With what has of late been a typical low rider turn-out for the west coast rounds, 21 riders worked their way through the three heats and single semi race to set up what would have surely been a grand event, promoted by Bob Bellino and his Circle Bell Motorsports group.  With a large crowd on-hand for the races, it was a tough call, but a correct one to make in terms of rider safety and lack of visibility as Sammy Halbert went down in the first couple of laps of the National main that were completed, and for some major luck and evasive moves by the other riders suffered no contact or injury as a result.

Several riders stated they had already used over a half-dozen tear-offs in the couple of laps that were completed, so it was surely the right thing to do all around in calling the event complete.

Points were to be awarded according to the finish in the Dash for Cash-which was won by championship points leader Brad Baker on the #12 Dodge Brothers Racing XR750.  The Bullet won the four-lap Dash over Bryan Smith on the #42 Howerton Motorsports Kawasaki by just over 2 seconds, after having won his heat race earlier in the afternoon by over 10 seconds in the 8-lap race.  It's probably a given the way The Bullet had things wired at Santa Rosa that he would have trounced the competition, but then again no one will ever know if Smith's lead in the main's few laps that were run would have held or not.

With the cancellation of the main, Baker heads to Pomona in just over 12 days with a solid hold on the championship standings, one which he has not let go of since he won the Hagerstown Half-Mile in early July when he took the first National win of his young and stellar career.

In the shot above, Baker and the #12 Dodge Brothers Racing/Specialty Fabrication/Saddlemen-sponsored team head out for rider intros at the Springfield Mile I round on August 31.  Team wrench Dave Atherton follows his son, Kevin as they guide the bike out towards the intros before heading to the starting line with The Bullet.

With Smith and Brandon Robinson (who was 3rd in the Dash and finished second behind Smith in their heat race on the #44 TJ Burnett Farms Kawasaki) the only other remaining men with a chance at the title, the Pomona Half-Mile Flat Track Finals on Saturday, October 12 will be even more of a go-for-broke blast of racing for The Rolling Thunder Show.

And in closing, we say BRAVO to the folks at AMA Pro Flat Track and Circle Bell Motorsports for making the correct call in canceling the mains yesterday.  We hate to have any race called but the outcome of this one should it have been run could have been pure disaster, and rider safety is first and paramount to anyone's thoughts or beliefs of 'what if' when it comes to 'iffy' chances.  And the weather that had rolled in at Santa Rosa was VERY 'iffy,' at best.

We know Bob Bellino and his great group of folks do a super job of putting paying butts in the seats on the west coast rounds, and will do it again, as they know how to entice a good crowd into coming to a great event, and the crowd on-hand got to see some excellent racing up until the heavy misting started to soak the track.

Now get ready to gear up for what will be an excellent showdown at Pomona when the greatest racing show on two wheels in the world heads to the Pomona Fairplex on October 12 for the 13th and final round of the 2013 AMA Pro Flat Track presented by J&P Cycles Grand National Championship season.  And boy howdy, this one will be a rip snorter between the three men still standing!

It's a Wash: Santa Rosa Mile Main Events Canceled Due to Heavy Mist

SANTA ROSA, Calif. (September 29, 2013) - Unfortunately, heavy mist has resulted in the cancelation of both the AMA Pro Grand National Expert and AMA Pro J&P Cycles Pro Singles main events today at the Sonoma County Fairgrounds in Santa Rosa, Calif. AMA Pro Racing officials deemed the track unsafe to race on after multiple attempts to dry and stabilize the surface.
"It's very unfortunate that we couldn't get the main events in today," said Dan Johnsen, Director of AMA Pro Flat Track. "We tried everything we could as far as prepping the track to get it back in racing condition but the mist was deceivingly limiting to our efforts."
Each rider that was scheduled to participate in their respective main events will be awarded one point in the standings. The usual point and cash payouts for the Grand National Expert Dash for Cash will remain the same. Normal purse payouts will be paid to both the Grand National Expert Twins and the J&P Cycles Pro Singles riders per order of their starting positions for each main event. 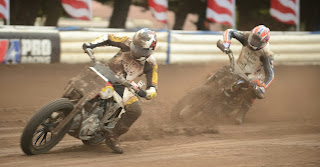 Jake Johnson on the #5 Lloyd Brothers Motorsports/Rampur Winery Ducati and Jared Mees on the #1 Rogers Racing/Blue Springs H-D XR750 are shown in battle during the couple of laps that were completed in the AMA Pro Flat Track presented by J&P Cycles Grand National Championship main event at the Santa Rosa Mile yesterday. Due to the 'heavy misting' that occurred during the event, AMA Pro Flat Track made the right call to cancel the mains due to rider safety and lack of visibility, as can be obviously seen in this photo. AMA Pro Flat Track photo by Dave Hoenig.
Brad Baker's victory in the Dash will result in him receiving an additional five points to his credit, increasing his lead in the overall standings to 17 markers over second-place competitor Bryan Smith with only one round remaining.
Next Up
AMA Pro Flat Track presented by J&P Cycles heads to Pomona, Calif. for the 13th and final round of the season on October 12, 2013 at the LA County Fairplex. For tickets and more information regarding the event, please visit http://www.flattrackfinals.com/.


AMA Pro Flat Track presented by J&P Cycles is a national motorcycle racing series in North America and is considered one of the oldest forms of motorcycle racing. Sanctioned by AMA Pro Racing, the Series is highly regarded as the most competitive form of dirt track racing in the world. The 2013 schedule consists of rounds on the country's finest flat track courses. For more information on AMA Pro Flat Track presented by J&P Cycles, please visit www.amaproracing.com/ft.
Posted by Stuman714 in Indy at 8:50 PM