PICKERINGTON, Ohio -- September 24, 2013 -- The American Motorcyclist Association is pleased to announce that Husqvarna Motorcycles, which had previously dedicated its support as a sponsor for the AMA Motorcycle Hall of Fame Induction Ceremony on Friday, October 18, has increased its commitment to become the AMA Legends Weekend presenting sponsor.

"In a year when Husqvarna celebrates an amazing milestone with 110 years of motorcycling history, we're pleased to help showcase that heritage alongside the impressive accomplishments of the Hall of Fame Induction Class of 2013," said Jeffrey V. Heininger, chairman of the American Motorcycle Heritage Foundation, which oversees the Hall of Fame. "It's fitting, too, since Husqvarna has strong ties to two existing Hall of Famers who will be honored as Hall of Fame Legends this year: Torsten Hallman and Mark Blackwell."

Hallman and Blackwell are well known for their motocross achievements while riding for Husqvarna, and both played a significant role in introducing the sport of motocross to America in the 1960s.

"Every one of us at Husqvarna Motorcycles is fortunate for the opportunity to pay tribute to Torsten Hallman and Mark Blackwell," said Husqvarna's Andy Jefferson. "The impact of their contributions remains significant, and their achievements within the motorcycle industry are legendary. We are really looking forward to honoring them both at this year's ceremony." 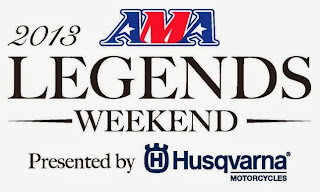 Tickets for the AMA Motorcycle Hall of Fame Legends Weekend, presented by Husqvarna, are on sale now at www.motorcyclemuseum.org. The price is $140 for Friday night's induction ceremony, and $20 for Saturday's midday reception, which includes a continental breakfast. Additionally, rooms at the Green Valley Ranch can be reserved now for a special rate at https://resweb.passkey.com/Resweb.do?mode=welcome_gi_new&groupID=19471407 or by calling (866) 782-9487 and using the code GCIAMHF.

Additionally, fans in town that weekend also have a chance to enjoy the AMA Supercross Monster Energy Cup Saturday night at Sam Boyd Stadium in Las Vegas. Tickets for the race are available now at www.supercrossonline.com.

The AMA Legends Weekend is a fundraiser for the AMA Motorcycle Hall of Fame, which is overseen by the American Motorcycle Heritage Foundation. The mission of the AMHF is to celebrate, elucidate and preserve the rich tradition of motorcycling in America. For more information, please visit www.motorcyclemuseum.org.