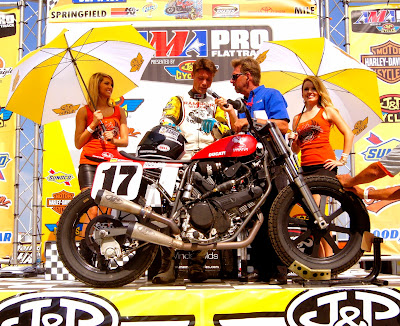 By now most fans have heard about the recent separation that has occurred with the Lloyd Brothers Motorsports AMA Pro Flat Track Grand National Twins Series team and rider Henry Wiles, a move that came down early Wednesday when Henry announced on his Facebook page that he had been notified by the team that his 'services were no longer needed' by the team.  But other then the senseless drivel and worthless finger pointing that has happened since that time (save for a short mention by Fight For Dirt Track.com's Tyler Porter in this week's InSlide Line column), and a short article in Cycle News this week, nothing has been heard from the LBM side of the camp.

And although I spoke directly with team co-owner Dave Lloyd last night concerning the matter, the team still had very little more to share about the matter other then to restate the obvious and to expound on the basics of the split, while also taking what I would consider the 'high road' in talking about the issue, something I am very accustomed to hearing from the team across the board on anything having to do with racing.

"I love Henry as a brother and it was and is one of the hardest decisions of my life and racing career," stated Lloyd in our conversation.  "We've been together almost two years this time around, and in the 2008 season with the Aprilia (and the team also won two AMA Pro Road Racing titles together in the '07-'08 seasons) and to have things come down like this were very difficult all around.

"Basically there was some inner and background rumblings going on, which I won't go into as it had to do strictly with the team as a whole, but the only way to nip things in the bud was to, unfortunately, cut ties with Henry, or face not being able to finish racing this season or even possibly in the future," continued one of the longest-tenured team owners in the AMA Pro Flat Track presented by J&P Cycles Grand National Championship series, "and to set the record straight, it had NOTHING to do with bringing Jake Johnson on board.  Jake was hired to help with the development end of the bike and to help Henry out in hopefully working towards winning the title, and although Henry was a little nervous at first in having a team mate after being the lone rider on the team for so long, it was NOT the deciding factor.

"I have to tell you we really struggled with this decision, but it came down to possibly being able to finish the season or continue racing next year, or not.  And to be honest, you're the only one I took the time to get back with after hashing this around for the better part of the week, and I've been so busy with the team, my real job and also looking at a move very soon from the Evansville, IN. area to the Atlanta, GA. area, so it's been busy.

"But I have a lot of respect for what you have done not only for us, but for the sport as a whole and felt like I needed to let you know directly what I can and will divulge of the matter, and that is pretty much it at this time.  I've been so upset about the whole thing and no matter what the internet boards and forums and the people on Facebook think or think they know, most of it is the usual drivel we see there that I won't take the time to comment on because it isn't the truth.  And other then that, at this time, I can't and won't say any more out of respect for Henry, who has done so much for us as a team, or out of respect for our sponsors.  People will think what they will think no matter what I say or don't, it was strictly a business decision that was one of the hardest things I've ever done in my life," concluded Lloyd.

Sunday's Springfield Mile II seemed to go somewhat better out of the gate with Henry finishing in the 2nd-place spot in his heat behind Smith (.120 seconds back!), but this time on the #17 LBM/Ramspur Winery/Foremost Insurance-backed XR750 (as opposed to the LBM Ducati the previous day as pictured), but a 6th-place finish in the Dash (zero points) coupled with another 9th-place finish in the National main, meant more points lost on the weekend to Baker, Smith and Robinson, with Robinson leap-frogging Henry from 4th to 3rd-place in the overall standings heading into the last two rounds of the season. 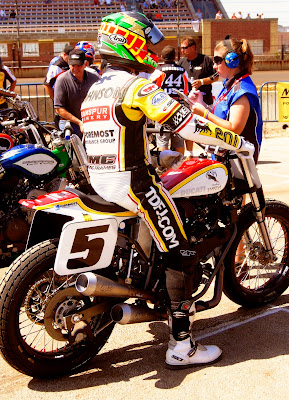 The team will continue for the rest of the season (and with any luck, beyond) with new-signee Jake Johnson, who had a top-5 spot all but pretty much locked up in the first race of the Springfield weekend before contact with the other riders in the main caused the bike to lose power as a result of a torn sensor contact.  Above, Johnson awaits the first qualifying session of the day several hours before that moment.

Johnson won his semi like the Champ that he is on Sunday for his first win for the team since coming onboard at the Indy Mile two weeks earlier (while both days riding the team's #5 Lloyd Brothers Motorsports/Ramspur Winery/Foremost Insurance-backed Ducati).  Johnson's semi race was an epic show of Johnson finally getting a big handle on the big Ducati, working his way to the win and the pass on the last lap to take semi #1 by .089 seconds. ButJohnson fell towards the end of the second pack at the end of the National main itself to garner an eventual 11th-place finish in what was a hard-fought race that saw the 7th through 12th-place finishers end the race within .232 seconds of one another.

So the team that went from a single-rider team to what I termed a 'super team' in just over three weeks time is back again to a single-rider team, and is forced to part ways with long time rider Henry Wiles.  And after talking with Dave Lloyd, the overall discontent and rumblings that caused them to part ways with Wiles weighed very heavily on his mind and on his mindset and was obviously a rough decision to come to grips with for him and the team.

But the little team that could, as they have in all aspects of their time in the AMA Pro Flat Track Grand National Championship series, has again taken the high road and will persevere and will come out, in the long run-hopefully-still intact and ready to meet tomorrow's racing challenges.

And we have to agree with team co-owner Dave Lloyd, no matter what anyone says or thinks, as we all know it's pretty easy to form an opinion on the internet from behind a keyboard, whether you have a clue or not (as most don't and won't) the ones that state or say what they will can and will keep on doing it, and those of us that DO no better will still continue to know and state the difference and laugh the b.s. off.

And bottom line, we wish all of the team members, sponsors and current-rider Jersey Jake Johnson, as we do departing rider Henry Wiles, the very best of luck now and in the future.

Whether or not AMA Pro Flat Track will roll up the carpets without either of the aforementioned great group of folks, the sport still needs every one of them for their support, their popularity and for their ability to put on a great show, and especially at times like this season when the race delays, cancelations and other factors have caused a perfect storm of problems across the board.

These are the people that make up The Rolling Thunder Show, the greatest racing series on two wheels in the world, and without any one of them, the sport may go on, but not as fast and definitely not as furiously as we like to see it do so!