MILLVILLE, N.J. (September 15, 2013) - Three-time AMA Pro National Guard SuperBike champion Josh Hayes turned 40 on Sunday at the New Jersey Lottery Devil's Showdown. Not in years, but in career National Guard SuperBike victories, as the Monster Energy/Graves/Yamaha superstar rebounded from Saturday's disappointment with a vintage ride that served as a clear reminder that he's still the man to beat in any given premier-class race. While he faces long odds in his quest to claim an unprecedented fourth-straight AMA Pro National Guard SuperBike title, the Mississippian got a measure of revenge for yesterday's contest. On Saturday, Hayes fought his way through the field after suffering an early electrical issue to take the checkered flag first, only to ultimately be dropped down to fourth in the official standings due to his third jump-start infraction of the 2013 GEICO Motorcycle AMA Pro Road Racing season. 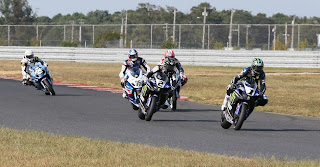