MONTEREY, Calif. (September 29, 2013) - Sunday's AMA Pro National Guard SuperBike season finale at Mazda Raceway Laguna Seca was the 2013 campaign summed up into a single race. Three-time series champion Josh Hayes demonstrated his superiority in terms of outright pace en route to scoring his eighth victory of the season in a blowout, but it still wasn't enough to overcome the consistent excellence of his 23-year-old Monster Energy Graves Yamaha teammate Josh Herrin.
Just as he has all year long, Herrin maximized the opportunities he was given and did exactly what he had to in order to secure his first-career GEICO Motorcycle AMA Pro Road Racing title. While the outgoing champ raced off into the sunset and took the checkered flag by a margin of 13.434 seconds, second-year National Guard SuperBike ace Herrin registered a calculated ride to a clear runner-up result, clinching the '13 premier-class crown in the process. Herrin took the title with a final tally of 345 points to Hayes' 330.
The new champ said, "I think the best word to describe my season is 'consistency.' We were real consistent all year. At the beginning of the year I wasn't even thinking about the championship. We got lucky at Daytona, but I figured Josh would come back, and he did. We got lucky at a lot of races, but at the same time we were smart and rode real consistent and it paid off in the end. Overall, it went great. This has been a lifelong dream of mine, and it's finally come true," Herrin continued. "I can't even explain the emotions right now. Coming around that last lap, I just filled up with tears. I could barely see where I was going. I've never felt that kind of emotion before. It's crazy the emotions you feel when you achieve something you've been waiting to do your whole life." 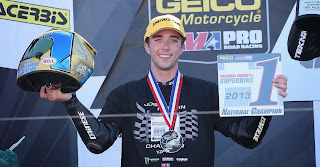