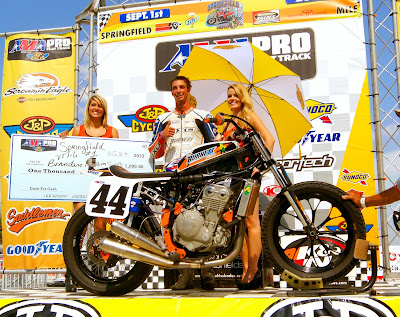 Brandon Robinson and the #44 TJ Burnett Farms/USC/James Hart Racing Kawasaki team had a weekend that most people that compete in The Rolling Thunder Show could only dream of, but the team persevered and grabbed the doubleheader win in both rounds of the Springfield Mile I & II doubleheader at the Illinois State Fairgrounds-hosted event over the Labor Day weekend.

Robinson, who had earlier in the season won his breakout win in the 2013 AMA Pro Flat Track presented by J&P Cycles Grand National Championships season at the Daytona Short Track II, had a career weekend at Springfield in winning his first and second Twins Series events of the year and of his career, and along the way swept the entire weekend's events starting with the fast qualifying time, winning the fastest heat to get the pole for each day's event, winning both Dash for Cash 4-lap bonus events and then taking the win in the 25-lap National mains on Saturday, August 31 and again on Sunday, September 1.

The young and rising star from Oxford, PA. thrilled the crowd on both days in what were two completely different outcomes to each race.  On Saturday, Robinson used the awesome power in his Woody Kyle Racing (WKR)-built Kawasaki EX650 to work his way around team mate JD Beach on the 6th lap of the race to run away with the win by just over 5.2 seconds.  In Sunday's race, Robinson fought tooth and nail with the duo of 2nd-place double round finisher Bryan Smith on the #42 Crosley Radio/Howerton Motorsports Kawasaki and the #2 Harley-Davidson Motor Co/Screamin' Eagle factory XR750 of Kenny Coolbeth, Jr. to grab the win by just shy of .3 seconds.  Team mate Beach nailed down the 3rd-place spot in both days events as well for what was a repeat of each finishing position over the course of both day's rounds.

In the shot above, Robinson acknowledges the crowd at the mecca of flat track racing at the Illinois State Fairgrounds after winning the Dash for Cash event at the Springfield Mile I on Saturday, August 31.

Please join us in celebrating this great feat and congratulating this fine young man and his team for their great efforts over the course of last weekend's events, and check out the press release below highlighting their great run to the top of the box at the Springfield Mile I & II.  Way to go guys, a big tip of the helmet to everyone who was involved!


Oxford, PA. – September 4, 2013 - Brandon Robinson ordered up a two-for-two special over the Labor Day weekend at the Springfield Mile I & II rounds held at the Illinois State Fairgrounds and took the #44 TJ Burnett Farms Kawasaki to the wins in both National mains over the course of the weekend's events. From the start of each day, Brob44 held the advantage over the rest of the field in qualifying in the top spot, winning both heats to set fast time and pole for each day, taking the Dash for Cash events and then winning each of the National mains to take maximum points. “Man, this is almost surreal,” Robinson said after Sunday's win. “One of my biggest goals in racing was to win the Springfield Mile and now to get two wins here in a single weekend is almost too much,” after winning rounds 10 & 11 of the 2013 AMA Pro Flat Track presented by J&P Cycles Grand National Championship. 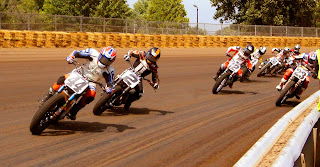 Brandon Robinson on the #44 TJ Burnett Farms/USC/James Hart Racing Kawasaki leads Kenny Coolbeth, Jr. #2, Brad Baker #12, Jeffrey Carver, Jr. #23 and the rest of the field out of turn four during heat race #1 at the Springfield Mile I on Saturday, August 31, 2013.  Robinson had the fast heat of the day and went on to win the Dash for Cash and the 25-lap National main and repeated the feat again during the Springfield Mile II on Sunday, September 1.  Photo by Mike Stuhler/Stu's Shots.

Robinson also won his first-ever AMA Grand National Championship Twins Series events to make his win total for the season three wins, seven top-5s and six top-3s on the year. After his first win at Springfield on Saturday, Robinson stated, “I never looked back until I took the checkered flag and I couldn’t believe I broke the draft. It’s unbelievable to get a win here at Springfield. It’s something I’ve dreamed about since I started racing. I’ll probably cry when it sinks in later tonight.”


The weekend was even more special for the rider of the #44 TJ Burnett Farms Kawasaki as he was able to score the wins in front of his Mom & Dad, who had previously missed his win at the Daytona Short Track II in March, and for the TJ Burnett Farms Kawasaki team for taking the double wins at their home track. The team's part-time pilot, JD Beach, also scored a pair of 3rd-place finishes over the weekend to sandwich Bryan Smith on the #42 Crosley Radio/Howerton Motorsports Kawasaki, to earn the Kawasaki marque it's first podium sweeps ever in an AMA Pro Flat Track Grand National Twins Series Championship event. 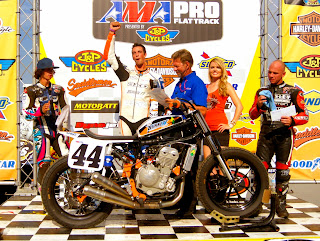 Brandon Robinson celebrates on the podium after taking the doubleheader win at the Springfield Mile II in round 11 of the 2013 AMA Pro Flat Track presented by J&P Cycles Grand National Championship on Sunday, September 1.  Bryan Smith came home in 2nd-place while BRob44's team mate, JD Beach rounded out the podium in 3rd-place, in a repeat of the previous day's events during the Springfield Mile I round.  Photo by Mike Stuhler/Stu's Shots.


Two races remain in the 2013 AMA Pro Flat Track presented by J&P Cycles Grand National Championship season, with round 12 of the season scheduled for September 29 at the Santa Rosa Mile, and closing out the season at the Pomona Half-Mile season-ender on October 12. As a result of his two wins, Robinson moved up to third in the overall championship, trailing points leader Brad Baker by 13 points and second-place Bryan Smith by 3 points (184-174-171 points.)


The team now has just over three weeks to prepare for the westward swing for the final two rounds of the season, and is looking forward to seeing all the fans stop by during the fan walks at both west coast events to share in the fun that we have had this season in our first full year together as a championship contending team.