DAYTONA BEACH, Fla. (September 10, 2013) - The AMA Pro GoPro Daytona SportBike title fight could be decided at this weekend's New Jersey Lottery Devil's Showdown at New Jersey Motorsports Park, the scene of several thrilling battles in previous seasons. Cameron Beaubier (No. 6 Yamaha Extended Service/Monster Energy/Graves/Yamaha YZF-R6) has a commanding lead in the championship, holding an 86-point advantage after a remarkable season. Beaubier's record-breaking campaign has seen him win nine of 10 races so far, leading him to the brink of clinching his first GEICO Motorcycle AMA Pro Road Racing title. With just three races left, including the two at NJMP plus the finale at Mazda Raceway Laguna Seca later this month, it would take a remarkable series of events for Cameron to lose the crown to second-place man Jake Gagne (No. 32 RoadRace Factory Yamaha YZF-R6) at this point. 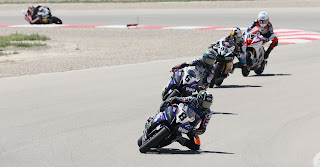 Garrett Gerloff on the #8 YES/Monster Energy/Graves Motorsports Yamaha YZR-R6 leads the pack during the Miller Motorsports Park round in the AMA Pro GoPro Daytona SportBike Series.  Cameron Beaubier on the #6 YES/Graves Yamaha leads the points standings as the series heads to the New Jersey Motorsports Park round this weekend September 13-15.  AMA Pro Road Racing photo by Brian J. Nelson.
Beaubier's winning ways have obscured how close many of the races have been. At the Miller Motorsports Park round in August, Beaubier had to make late-races passes to come out as the winner over teammate Garrett Gerloff (No. 8 Yamaha Extended Service/Monster Energy/Graves/Yamaha YZF-R6) and JD Beach (No. 95 RoadRace Factory Yamaha YZF-R6) and Beaubier was less than 0.2 of a second ahead each time. Previously, the second-place points man Jake Gagne made Beaubier work for his wins and even defeated Beaubier at Road America. In 2012, Beaubier went on to win a total of seven races after an early injury hampered him in the standings, and the season shaped up as a "championship-or-bust" proposition for the young Californian. Beaubier responded to the pressure with not only blazing speed but also impressive calculation and risk management. Beaubier's adopted strategy of avoiding trouble on the opening laps has meant other riders have taken the point early while Beaubier picked off rivals one at a time until he found himself at the front.
If Beaubier wraps up the GoPro Daytona SportBike title for Yamaha, it will be the first time the brand has won the crown since the class inception in 2009. Ben Bostrom took home Yamaha's last middleweight championship in AMA Pro competition in 2008 when he won the class for one of the predecessors to Daytona SportBike, AMA Supersport.
Beaubier, currently ranked second overall in career GoPro Daytona SportBike wins and poles, can't catch all-time leaders Martin Cardenas and Jason DiSalvo this year, but the Californian is on course to break the tie with Cardenas for most Daytona SportBike wins in a season. Cardenas won nine races in his 2010 championship season, a mark Beaubier equaled in Utah. Last year's New Jersey Motorsports Park races saw Cardenas and Beaubier split the victories.
For Gagne to win the championship, he needs to win the last three races and have Beaubier score only a handful of points. Although it is a longshot, Gagne has been very strong in 2013. The Californian has been in the top five every race and finished on the podium seven times, including his Road America win. The Utah round was his least successful, though, having seen him finish fifth in both races as he and his team never recaptured top form. Gagne, with a 23-point lead over Gerloff for second in the points, will look to return to the box in New Jersey. One rider cresting on a wave of momentum is Gerloff. Having missed most of 2012 after a crash at the season opener in Daytona, Gerloff will return to the scene of his impressive AMA Pro debut at New Jersey Motorsports Park in 2011. Gerfloff has earned three second-place finishes in a row and he put in his best challenges yet in Utah. Gerloff has stated his goal this season is to beat teammate Beauier and he has three more chances to do it.
Beach is fourth in points this year and has made steady progress in consistency this year. The Kentucky resident has finished in the top five following each race in 2013 and has worked on getting up to speed earlier in the weekends. In Utah, Beach made the move of the race, making a pass with his rear wheel in the air. A victory, which would be Beach's first Daytona SportBike triumph, would cap off his season nicely. Rookies Jake Lewis (No. 85 Meen Motorsports Racing Yamaha YZF-R6)  and James Rispoli (No. 43 National Guard/Celtic Racing Suzuki GSX-R600) are contesting fifth place in the points, with Lewis holding a tight three point margin heading into New Jersey. Lewis has had a statistical superior season, scoring a podium at Road America and posting five top fives. Rispoli, however, has been more consistent, finishing eighth or better each time out in 2013. Last year, Dane Westby (No. 5 GEICO Motorcycle Road Racing Honda CBR600RR) finished on the podium at New Jersey both times on his way to an eventual second-place in the 2012 GoPro Daytona SportBike championship, but the Oklahoman hasn't been able to recapture that form in 2013. His team has been developing a new brand of motorcycle in 2013 and Westby and his squad would like nothing better than a return to the podium as a showcase for their efforts.
Two Triumph-mounted veterans Jason DiSalvo (No. 40 Latus Motors Racing Triumph Daytona 675) and Bobby Fong (No. 50 D&D Cycles/Castrol/Triumph Daytona 675) occupy the next slots in the points. Fong is looking to get back on the podium after being shut out since the DAYTONA 200 in March. DiSalvo was on the podium at Barber and just missed out at Laguna Seca. North Hollywood, Calif. product Benny Solis (No. 3 M4 Hotbodies Racing) will be looking for solid results this weekend with hopes of bettering, or at the very least, maintaining his 10th-place position in the GoPro Daytona SportBike point standings.
For tickets to GEICO Motorcycle AMA Pro Road Racing's Round 8 at New Jersey Motorsports Park on September 13-15, 2013, please visit http://store.njmp.com/store/category/9/69/AMA-SUPERBIKE/ or call 856-327-8000.
How to Catch the Action

This weekend's GEICO Motorcycle AMA Pro Road Racing action will be broadcast on CBS Sports Network as part of the CBS Sports Spectacular. This weekend's coverage consists of four straight hours of programming on September 15, including LIVE broadcasts of Sunday's AMA Pro National Guard SuperBike and GoPro Daytona SportBike finals. The four-hour block will begin on Sunday, September 15 at 1:00 p.m. ET/10:00 a.m. PT. Fans can find CBS Sports Network on their TV by using the channel finder at http://www.cbssportsnetwork.com/channel-finder.
In addition to the race broadcasts on CBS Sports Network, AMA Pro Live will be live streaming multiple channels of behind-the-scenes video of the weekend's activities alongside Live Timing & Scoring. AMA Pro Live puts fans in the director's chair, allowing them to choose from a variety of viewpoints including track cameras, paddock cameras and a press conference channel. Streaming will begin with coverage of the weekend's practice and qualifying sessions on Friday, September 13 at 11:00 a.m. ET/8:00 a.m. PT at http://www.amaprolive.com/rr/.
Stay connected with GEICO Motorcycle AMA Pro Road Racing on social media at http://twitter.com/AMAProSBK and http://www.facebook.com/AMAProRoadRacing.
About GEICO Motorcycle AMA Pro Road Racing:
GEICO Motorcycle AMA Pro Road Racing is the premier motorcycle road racing series in North America and is universally regarded as one of the most competitive road racing organizations in the world. The 2013 schedule consists of nine rounds of competition on the country's finest road courses. The Series is comprised of four production-based classes: AMA Pro National Guard SuperBike, AMA Pro GoPro Daytona SportBike, AMA Pro Motorcycle-Superstore.com SuperSport and the AMA Pro Vance & Hines Harley-Davidson Series. Learn more about GEICO Motorcycle AMA Pro Road Racing at www.amaproracing.com/rr/.
Posted by Stuman714 in Indy at 7:38 PM