MILLVILLE, N.J. (September 11, 2013) - The AMA Pro Motorcycle-Superstore.com SuperSport season winds up this weekend with the New Jersey Lottery Devil's Showdown at New Jersey Motorsports Park, concluding an unpredictable and exciting season that has seen five riders win in 2013 and 12 riders earn the podium in this year's races thus far. With those capricious outcomes as the backdrop, the Motorcycle-Superstore.com SuperSport East Division title will be decided in the weekend's doubleheader that promises to be another thrilling chapter in a great year of racing. 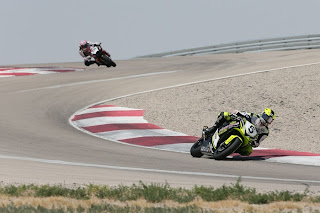 Corey Alexander on the #5 National Guard/Celtic Racing Suzuki GSX-R600 leads the East points championship battle in the AMA Pro Motorcycle-Superstore.com SuperSport Series heading into round 8 of the season at the New Jersey Motorsports Park-hosted event this weekend, September 13-15.  AMA Pro Road Racing photo by Brian J. Nelson.
There are 39 riders pre-entered for the races this weekend, but the spotlight will shine on the three riders most likely to take home the East Division championship. Corey Alexander (No. 5 National Guard Celtic Racing Suzuki GSX-R600) currently leads the points and the New Yorker is glad to be headed to his home region with a nine-point advantage. Alexander's season has gone well, with the youngster clocking his best results yet in the class. He won both races at Road America to cement his status as a class contender and has been steady throughout his 2013 campaign. Alexander has finished inside the top seven positions a total of eight times this year, with four podium results. In the East races, he has finished outside of the top 10 only once, in the season opener at Daytona International Speedway. The effort has earned him a slim margin, so he has a few points to give up to a rival but not enough to go into full conservation mode. Alexander will need to be quick in New Jersey and the young rider should be ready to put in a good performance this weekend.
Second-place man Hayden Gillim (No. 69 Team 95 Yamaha YZF-R6) has closed rapidly in the second half of the year. He found his form at Mid-Ohio and has been on the podium for the last three East races, including a win in Ohio at the most recent East contest. Gillim, a tough rider to beat on his day, can still control his own destiny with two races plus bonus points for pole and leading the most laps up for grabs. Gillim's aggressive style could serve him well at New Jersey. Knowing what is up for grabs will allow the Kentuckian to push hard and see what happens.
Stefano Mesa (No. 37 Motosport.com RSRacecraft Yamaha YZF-R6) is still in the fight as well. The Colombian has two positions in the standings and 14 points to make up, but the fiery rider has found a hot streak before. At the season opener at Daytona, Mesa won a tightly contested battle. Despite some recent misfortune along the way, Mesa led the points for much of the year. He was ill at Barber Motorsports Park and at Mid-Ohio, a late-race crash put him in a tough spot as he was classified 23rd. Mesa is going to need to be at the top of his game this weekend, plus get some help from some other riders in the field.
There are plenty of fast riders looking to make an impact and none more notable than the recently crowned West and Overall AMA Pro Motorcycle-Superstore.com SuperSport champ Tomas Puerta (No. 1 RoadRace Factory Yamaha YZF-R6). The Colombian locked up the 2013 championship at Miller Motorsports Park and will compete with his new number one plate at the final race of the year. In a season filled with unpredictable races, Puerta has been the most consistent racer in the class. The fans may not have been able to guess the winner, but figuring Puerta would be near the front was always a safe bet. "Tomy" finished in the top five at every East and West race, save for one race at Mid-Ohio when his machine developed a problem while he led.
With the points situation decided, Puerta can truly go for victory without fear of damaging his championship goals. The class veteran could have a big impact in how the East points play out as well, since he'll be tough to beat in Jersey.
Another racer who has been on the rise is Wyatt Farris (No. 9 Meen Motorsports Yamaha YZF-R6). Farris made steady improvement in 2013 through the top ten, but in Utah his second and third-place finishes that saw him scrap for wins were a high-water mark. Farris was quick to credit his team for the advances, but his skills have improved considerably this season and a win or two would complete his charge to the front. Miles Thornton (No. 72 CTR Racing Yamaha YZF-R6) is another rider that has impressed of late. Sitting fourth in the points, the Georgian had his best round yet in Ohio, backing up a strong qualifying performance with two thirds. Thornton is itching to win a race and could be one of the pivotal players this weekend in New Jersey. Travis Wyman (No. 24 Harv's H-D Suzuki GSX-R600) is in a similar position, posting a close second to Gillim at Mid-Ohio. Wyman led much of that race and the New Yorker gave Gillim all he could handle in that memorable race. His confidence level is high heading into New Jersey. After finishing second to Puerta in West points, veteran Jeffrey Tigert (No. 91 Baby Appleseed CM Motorsports Yamaha YZF-R6) will be in a similar position. A win would be a nice cap to a good season for the Californian. Also keep an eye on Nick McFadden (No. 118 TOBC Racing Suzuki GSX-R600) and Conner Blevins (No. 33 Ajax Kawasaki ZX-6R), two young riders with bright futures in AMA Pro Motorcycle-Superstore.com SuperSport.
The 19-lap race finals to determine the East champion will be held Saturday and Sunday at 1:00 p.m. and 2:00 p.m. local time, respectively.

This weekend's GEICO Motorcycle AMA Pro Road Racing action will be broadcast on CBS Sports Network as part of the CBS Sports Spectacular. This weekend's coverage consists of four straight hours of programming on September 15, including LIVE broadcasts of Sunday's AMA Pro National Guard SuperBike and GoPro Daytona SportBike finals. The four-hour block will begin on Sunday, September 15 at 1:00 p.m. ET/10:00 a.m. PT. Fans can find CBS Sports Network on their TV by using the channel finder at http://www.cbssportsnetwork.com/channel-finder.
In addition to the race broadcasts on CBS Sports Network, AMA Pro Live will be live streaming multiple channels of behind-the-scenes video of the weekend's activities alongside Live Timing & Scoring. AMA Pro Live puts fans in the director's chair, allowing them to choose from a variety of viewpoints including track cameras, paddock cameras and a press conference channel. Streaming will begin with coverage of the weekend's practice and qualifying sessions on Friday, September 13 at 11:00 a.m. ET/8:00 a.m. PT at http://www.amaprolive.com/rr/.
Stay connected with GEICO Motorcycle AMA Pro Road Racing on social media at http://twitter.com/AMAProSBK and http://www.facebook.com/AMAProRoadRacing.
About GEICO Motorcycle AMA Pro Road Racing:
GEICO Motorcycle AMA Pro Road Racing is the premier motorcycle road racing series in North America and is universally regarded as one of the most competitive road racing organizations in the world. The 2013 schedule consists of nine rounds of competition on the country's finest road courses. The Series is comprised of four production-based classes: AMA Pro National Guard SuperBike, AMA Pro GoPro Daytona SportBike, AMA Pro Motorcycle-Superstore.com SuperSport and the AMA Pro Vance & Hines Harley-Davidson Series. Learn more about GEICO Motorcycle AMA Pro Road Racing at www.amaproracing.com/rr/.
Posted by Stuman714 in Indy at 1:00 AM