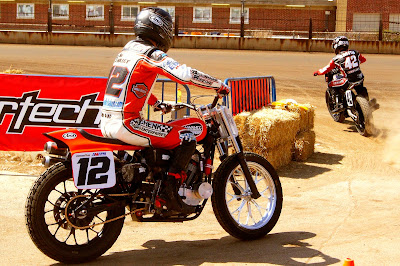 Brad Baker came into rounds 10 & 11 of the 2013 AMA Pro Flat Track presented by J&P Cycles Grand National Championship at the Springfield Mile I & II with the overall lead in the point standings, and accomplished what he needed to over the weekend in order to keep it.  However, after a double helping of 5th-place finishes at the Illinois State Fairgrounds-hosted event, his lead shrunk from 17 to 10 points after the roar had subsided and the dust had settled, keeping a small, but distinct edge in the championship battle heading into the final two rounds of the season.

Baker, riding the #12 Dodge Brothers Racing/Sefnco Communications/Specialty Fabrication-sponsored H-D XR750, stayed in the heat of things all weekend at Springfield in spite of missing both of the Dash for Cash rounds.  When it came time for the National mains on Saturday, August 31 and Sunday, September 1 The Bullet was right at the front battling with the winning trio of Brandon Robinson, Bryan Smith, JD Beach and the 4th-place finishers in Willie McCoy and Kenny Coolbeth, Jr.

In the shot above from the Springfield Mile I on Saturday, August 31, Baker follows fellow title-rival Bryan Smith on the #42 Crosley Radio/Howerton Motorsports Kawasaki out for the first round of qualifying for the day at the mecca of mile flat track racing.

With two rounds left in the 2013 season, the series takes a few weeks' break before unloading for round 12 of the 2013 AMA Pro Flat Track presented by J&P Cycles Grand National Championship at the Santa Rosa Mile on September 29.  Baker still leads the championship over Smith and Robinson, 184-174-171, with fellow racers Henry Wiles (159 points) and defending AMA Grand National Champion Jared Mees (158 points) still hanging tough with a mathematical chance at the title.

Check out The Bullet's Springfield Mile doubleheader race report below as we get geared up for the final run to the championship in just three weeks time.

Friday, September 6, 2013 -- This last weekend took us back to the historic town of Springfield, Illinois. We had already been here once this year but this time the weather was way better! The Memorial day weekend of racing earlier this year was canceled due to excess rain.

This weekend there was absolutely no rain in the forecast but there was definitely excess heat. It was almost 100 degrees on both Friday and Saturday with humidity to the max. It seems like it just wouldn’t be Springfield if there wasn’t a delay or cancelation due to rain or its' just plain hot.
The weekend would start off on Friday on the awesome short track put on by the AMA Steve Nace All-Star crew. Usually this race has always been a Grand National in the past, but this year it was dropped down to an All-Star event. Nonetheless the track was still in awesome shape and made for amazing racing. This is a track were I have always excelled over most of the other riders and I have never had a bad finish here other then maybe a couple as an amateur rider.
I started off the night by winning my heat and earinng myself a nice spot on the front row. In the main I got off the line second right behind #95 JD Beach. I hounded JD on the outside for almost the whole race. Some of the time we were side by side for several laps. I guess we had the crowd going nuts. Finally on lap 16 I made the pass stick on the outside. Once I got ahead I broke free a little and eventually brought home the win. I really wish this would have been a National like years past because I would have been able to gain some valuable GNC points. Nevertheless it was still a really fun race with a competitor that I grew up racing with.


The next day is where things got serious on the legendary Springfield Mile! Just the weekend before at the National in Richmond ,Virginia I had a mechanical DNF when I was leading the National. This almost cut my points lead in half so I could definitely feel the pressure a little more coming into Springfield.
My goal for the weekend was to make the Dash for Cash races and get solid top-5 finishes to retain my points lead for the last two races in California. Springfield is such a forgiving race track and a lot of riders can go well in the corners here so I knew this would play more in the Kawasaki riders favor and make them tough to beat.
Unfortunately, on both days I finished right outside the transfer position into the Dash for Cash but I was in the GNC main event. Both main events of the weekend were some of the best racing I had been in all year! Other than Brandon Robinson breaking away in the lead on Saturday it was uncertain who was going to win all the way to the end of the race because there was so much passing going on. Each day it was three Kawasaki riders and three Harley-Davidson riders. The Kawasakis always seemed to have the edge though as they could pull out of the draft and past an H-D rider whenever they wanted.
On Saturday I finished a close 5th-place finish only a couple thousandths back from second place. On Sunday I spent most of the time in the top three throughout the race but the closing laps would turn out to be the toughest ones. Brandon Robinson, Bryan Smith and JD Beach, all three Kawasaki riders, hooked up in the last couple of laps. This made them even harder to pass since they were towing each other at their own speed. Myself, Kenny Coolbeth, and Jared Mees were right there on their tail but we couldn’t seem to make the pass. This time I was only a couple thousandths back off of first place but I was still in 5th-place.
I never exactly reached my goal because I didn’t make the Dash for Cash’s but I did finish with two top-5’s. Bryan Smith who is the main rider I am battling for the championship with got two second place finishes respectively. I was leading by 17 coming into the weekend and now I lead by 10 points. The other riders did gain some but I would much rather be leading by 10 then be behind by 10!
The next two races are tracks in Santa Rosa and Pomona, California that are tracks that I go very well at so the cards are still in my favor. We now have a little less than a month to get prepared for Santa Rosa which will be on the 29th of this month. Literally right after I send this report I am taking of for northern Michigan where I will be riding a sweet little short track and TT on Saturday and Sunday.


Thank you very much to all my supporters! Please stay tuned for my next report which will be after the last GNC Race on October 16th.

Follow this link to check out a video from Flat Track Live from the mile on Sunday:
https://www.youtube.com/watch?v=9r3Dwlhc8wc&feature=player_embedded#t=10 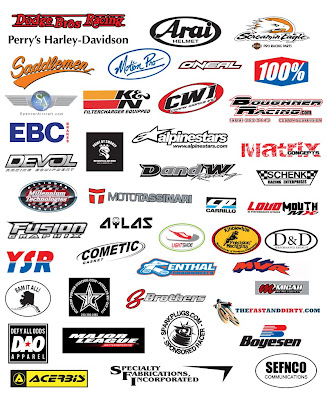