MONTEREY, Calif. (September 27, 2013) - Despite maintaining a position of consistent dominance over the AMA Pro National Guard SuperBike field in 2013, defending three-time series champion Josh Hayes enters this weekend's GEICO Motorcycle AMA Pro Road Racing season finale at Mazda Raceway Laguna Seca facing long odds in his hopes to top Josh Herrin and collect an unprecedented fourth-consecutive premier-class title.
Twenty-two points out of first with just Sunday's single race to go, Hayes needs a lot of help if he's to somehow retain his crown. Hayes performed in fine fashion on Friday, securing the provisional pole with a blistering time of 1:24.249.
Hayes not only led the way in the National Guard SuperBike class, he even outpaced the superstars of the FIM Superbike World Championship in their respective first practice and first qualifying sessions despite the national championship's considerably tighter technical rules. With the pressure of the championship fight largely removed from his shoulders, Hayes rode fast and loose, acclimating to his Monster Energy/Graves/Yamaha YZF-R1 after guesting aboard a World Endurance-spec R1 at Le Mans last weekend. After qualifying, Hayes said, "I've just tried to be steady and roll around the racetrack and keep myself feeling good and fresh because I know I'll be fastest on Sunday. I'll keep working at it." 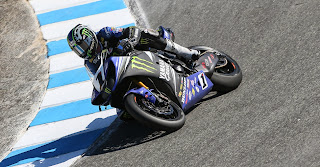