The Devil Made Him Do It: Josh Hayes On AMA Pro National Guard SuperBike Provisional Pole Despite Crash On Friday at New Jersey Motorsports Park

Fortunately for Hayes, he's been pretty much unbeatable at New Jersey Motorsports Park as long as the track has been on the schedule. He's scored seven of the eight National Guard SuperBike wins at the venue prior to this year's visit with the sole exception being a clutch runner-up ride in the 2011 season finale to lock down a narrow championship victory. The Mississippian provided further evidence of his NJMP mastery today, pacing the opening free practice by well over a second and then establishing a new lap record in qualifying. Hayes broke the three-year-old mark of one-time archrival Tommy Hayden, slicing under the Kentuckian's existing time of 1:20.624 with a quick lap of 1:20.536 on Friday afternoon. But the day ended with a tough break for Hayes, who crashed in turn two on the last lap of qualifying. Hayes was fine, although his motorcycle needed some attention. After the session, Hayes said, "For the most part, it's been a pretty good day. Things have clicked off well; the first session was pretty fast compared to last year, and it feels like everything is pretty much heading in the right direction and I'm having fun riding the motorcycle." 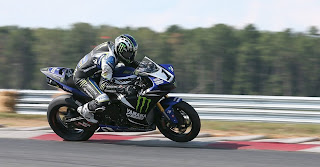