MILLVILLE, N.J. (September 12, 2013) - Every session, every overtaking maneuver, and every hard-earned position at the checkered flag hold increased importance now that the 2013 AMA Pro Vance & Hines Harley-Davidson Series title fight is down to its final two races. Following last month's XR Showdown doubleheader opener at Indianapolis Motor Speedway, the four-race shootout to determine this year's champion is already halfway completed, but nothing is settled just yet. This weekend at The New Jersey Lottery Devil's Showdown the intense struggle for XR1200 supremacy and the $60,000 Showdown prize resumes at New Jersey Motorsports Park. 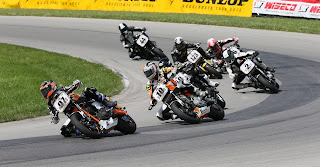 Nicholas Hansen #97 leads Josh Chisum #10 and the rest of the field in the AMA Pro Vance & Hines Harley-Davidson Series earlier in the season at Mid-Ohio.  The series resumes it's $60K Showdown this weekend at the New Jersey Motorsports Park round September 13-15.  AMA Pro Road Racing photo by Brian J. Nelson.
Steve Rapp (No. 5 Aerostar Global/Suburban Harley-Davison) carried a four-race win streak into the XR Showdown. However, that streak was snapped and he was twice defeated at Indy in a pair of thrilling contests that came down to final-lap drafting duels. While his 4-2 finishes may have felt like a minor disappointment considering his stellar mid-season form, the combined result was anything but a setback for his ultimate goal. In fact, Rapp's consistency, combined with the fact that the two wins went to international wild card entries not in XR Showdown contention, means the veteran pilot actually finds himself in a position of power in his quest to secure a first-career GEICO Motorcycle AMA Pro Road Racing championship. Despite missing out on victory for the first time since March, Rapp now boasts an eight-point advantage heading into NJMP. Also working in Rapp's favor is that that fact that the only other Showdown contender to have won a race this season, Tyler O'Hara (No. 29 Eco Fuel Saver/Scrubblade), crashed out early in Sunday's contest at IMS. As a result, O'Hara finds himself with a steep hill to climb, as he's been relegated to fifth in the title chase, some 20 points removed from Rapp and with precious little time to make up that ground on the steady and experienced Rapp.
While Rapp is undeniably in a good place at the moment, anything can happen at New Jersey Motorsports Park, as illustrated by last year's Harley-Davidson stunner. Kyle Wyman came into NJMP with a commanding XR Showdown lead after an excellent performance in the '12 Indy doubleheader. However, Wyman crashed hard on the final lap while running as part of a seven-man dogfight for the win in New Jersey and was effectively knocked out of the title fight as a result. The win that day actually went to a rider outside the XR Showdown -- home-track hero Shane Narbonne (No. 46 Mob Racing). Narbonne is very much in title contention this year, however, as he returns to the scene of his first-career GEICO Motorcycle AMA Pro Road Racing race victory ranked fourth in the championship fight and well positioned to make a serious move for this year's crown.
Kyle's brother, Travis Wyman (No. 24 Harv's Harley-Davidson), is another rider to keep close tabs on. Wyman has increasingly shown the ability to match Rapp in terms of outright pace, pushing him for a close second at Mid-Ohio and then followed that up with a strong fifth and third at Indy. He is currently second in the XR Showdown standings, just eight points removed from title favorite Rapp. Of course, you can never count out defending series king Michael Barnes (No. 1 Spyke's Harley-Davidson). 'Barney' is now third, 15 points off Rapp, but successfully fought his way back from a deeper deficit last season to score his first AMA Pro title.
Positions five through ten are tightly packed following the Indy doubleheader. David Estok (No. 123 Thrashed Bike Racing) leads that group, but only eight points total separate Estok, Ben Carlson (No. 45 Suburban Harley-Davison), Nicholas Hansen (No. 97 H&S Distributors), Josh Chisum (No. 10 Eco Fuel Saver/Scrubblade), and Barrett Long (No. 2 Longevity Racing). And as Narbonne showed last year at NJMP (and indeed, as Jeremy McWilliams and Hafizh Syahrin demonstrated last month in Indy), talented riders from outside the XR Showdown can still step forward and make their presences felt at the front on any given day, adding to the unpredictable nature of the AMA Pro Vance & Hines Harley-Davidson Series.
For tickets to GEICO Motorcycle AMA Pro Road Racing's Round 8 at New Jersey Motorsports Park on September 13-15, 2013, please visit http://store.njmp.com/store/category/9/69/AMA-SUPERBIKE/ or call 856-327-8000.


How to Catch the Action

This weekend's GEICO Motorcycle AMA Pro Road Racing action will be broadcast on CBS Sports Network as part of the CBS Sports Spectacular. This weekend's coverage consists of four straight hours of programming on September 15, including LIVE broadcasts of Sunday's AMA Pro National Guard SuperBike and GoPro Daytona SportBike finals. The four-hour block will begin on Sunday, September 15 at 1:00 p.m. ET/10:00 a.m. PT. Fans can find CBS Sports Network on their TV by using the channel finder at http://www.cbssportsnetwork.com/channel-finder.
In addition to the race broadcasts on CBS Sports Network, AMA Pro Live will be live streaming multiple channels of behind-the-scenes video of the weekend's activities alongside Live Timing & Scoring. AMA Pro Live puts fans in the director's chair, allowing them to choose from a variety of viewpoints including track cameras, paddock cameras and a press conference channel. Streaming will begin with coverage of the weekend's practice and qualifying sessions on Friday, September 13 at 11:00 a.m. ET/8:00 a.m. PT at http://www.amaprolive.com/rr/.
Stay connected with GEICO Motorcycle AMA Pro Road Racing on social media at http://twitter.com/AMAProSBK and http://www.facebook.com/AMAProRoadRacing.
About GEICO Motorcycle AMA Pro Road Racing:
GEICO Motorcycle AMA Pro Road Racing is the premier motorcycle road racing series in North America and is universally regarded as one of the most competitive road racing organizations in the world. The 2013 schedule consists of nine rounds of competition on the country's finest road courses. The Series is comprised of four production-based classes: AMA Pro National Guard SuperBike, AMA Pro GoPro Daytona SportBike, AMA Pro Motorcycle-Superstore.com SuperSport and the AMA Pro Vance & Hines Harley-Davidson Series. Learn more about GEICO Motorcycle AMA Pro Road Racing at www.amaproracing.com/rr/.
Posted by Stuman714 in Indy at 8:50 PM