With just four laps remaining in the Springfield Mile II (above), Bryan Smith on the #42 Crosley Radio/Howerton Motorsports/Villa Esparaza-sponsored Kawasaki rocket appeared to have round 11 of the 2013 AMA Pro Flat Track presented by J&P Cycles Grand National Championship Series in hand, but Brandon Robinson had other plans in mind for the day to cap off a whirlwind weekend for the TJ Burnett Farms Kawasaki team and rider.

Robinson, on the #44 TJ Burnett Farms/USC/James Hart Racing-backed Kawi missile ran down Smith and led the final lap that counted to earn himself and his Southern Illinois-based team another trip to the podium in just less then 24 hours at the Illinois State Fairgrounds-hosted event.  Smith again rounded out the podium, with Robinson's team mate, JD Beach on the #95 TJ Burnett Farms/Red Bull/Bell Helmets-sponsored Kawi filling out the podium again for the first and second Kawasaki sweep in AMA Grand National Twins Series Championship in the series' history.

Robinson leap frogged the competition with his doubleheader set of victories, to move to 3rd-place in the championship with 171 points, easily within reach of grabbing back the lead he had held earlier in the season.  BRob44 never set a wheel wrong over the two day event, setting fast qualifying time, winning the fastest heat races and both Dash for Cash events, before storming the field to a 5-plus second win on Saturday before hanging out with the crowd and taking the win outright over the rest on Sunday by just over .2 seconds, for his first Twins Series wins of his very promising career and awarding team owner TJ Burnett with a pair of wins at his and the team's home track.

Brad Baker retained his overall points standings lead, which he has held since the mid-point of the season, with a pair of 5th-place runs on the #12 Dodge Brothers Racing/Sefnco Communications/Specialty Fabrication-sponsored H-D XR750.  Baker's lead stands at 10 points over runner-up Smith (184-174 points) heading into round 12 of the season at the Santa Rosa Mile on September 29.

Jared Mees, who had earlier in the day married his long time sweetheart, Nichole Cheza in the first for an AMA Grand National Championship event, and rounded out his weekend with a 6th-place finish on the #1 Rogers Racing/Blue Springs/Las Vegas H-D-backed XR after a 7th-place finish the previous day in round 10. Mees has an outside shot at defending his championship as he now lies in the 5th-place spot in the points (158 points), just one point behind 4th-place man Henry Wiles (159 points).

And Kenny Coolbeth, Jr. on the #2 Harley-Davidson Motor Co/Screamin' Eagle/Traxxas-sponsored factory XR750 grabbed the 4th-place spot for round 11 after taking home a 6th-place finish the previous day.  Coolbeth sits in the 6th-place in the championship hunt with 131 points. 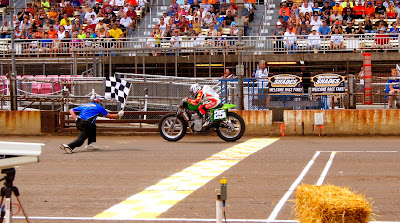 Shayna Texter was the one who really had the crowd going over the weekend as the AMA Pro Flat Track Basic Twins Series made it's non-points paying debut at the hall of speed in Springfield.  Texter scored a set of double wins in rounds 10 & 11 on her #25A Crosley Radio/Howerton Motorsports/Racing Unlimited-sponsored Kawasaki EX650 to wow the crowd and set in motion her near future move to the Twins bikes competition.

The bike that she rode over the Labor Day weekend was the Kawasaki twin that was originally being built for Weirbach Racing's Rob Pearson, but after several delays throughout the season the Iowa-based team put the project on the back burner in order to concentrate on their in-house H-D XR750 and Suzuki SV650 Twins Series efforts.

This left the machine, with no testing having been completed on it, open for the young Pennsylvanian to ride in the Basic Twins debut over the Labor Day weekend, and Racing Unlimited delivered a great package for her to take the big wins on August 31 and September 1.

And ride she did, taking the Saturday win by just over 11.4 seconds, and Sunday's romp (shown above) by a tick over 4.2 seconds after AMA Pro Flat Track evened out the playing field and made adjustments for restrictors to the field in trying to close up the competition gap.

It didn't matter, you could have thrown an anchor around Shayna either day and she still would have whipped the rest of the field and romped away the winner.

You can read the full rundown of the weekend here thanks to Cycle News' Larry Lawrence, my traveling partner for the great weekend of racing at Springfield.

Full results for round 10 are here and round 11 here.

And while you are waiting for round 12 of the 2013 AMA Pro Flat Track presented by J&P Cycles Grand National Championship season at the Santa Rosa Mile on September 29, read up on the press release below from AMA Pro Flat Track.