DAYTONA BEACH, Fla. (October 2, 2013) - Last weekend, GEICO Motorcycle AMA Pro Road Racing wrapped up its 2013 season with some thrilling on-track action at Mazda Raceway Laguna Seca in Monterey, Calif. and saw a new National Guard SuperBike Champion crowned. At the conclusion of the event on Sunday evening, the annual 2013 Year-End Awards Celebration was held to acknowledge and compensate many of the series' star-studded competitors for their efforts and impressive achievements attained over the course of the 2013 season.
For their integral part in the success of the 2013 season, the GEICO Motorcycle AMA Pro Road Racing community would like to extend many thanks to all of the sponsors that supported these important year-end awards.
AMA Pro National Guard SuperBike
No. 2 Monster Energy Graves Yamaha rider Josh Herrin edged out teammate and reigning three-time National Guard SuperBike Champion Josh Hayes by 15 points in the standings to claim his first career championship in the elite class. Herrin recorded four wins in 2013 and finished inside the top five in every race but one. The Dublin, Ga. product was recognized for his astonishing achievements this season and was awarded $20,000, a specially-made Dunlop guitar and the coveted National Guard SuperBike No. 1 plate for winning the championship. 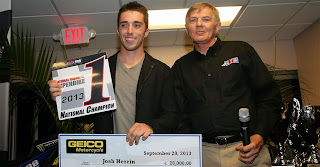 Josh Herrin shows off his ceremonial #1 plate and season-end bonus check for taking the championship title in the AMA Pro National Guard SuperBike Series at the season finale at Laguna Seca.  Geico Motorcycle AMA Pro Road Racing celebrated the 2013 season after the season finales at Laguna and handed out awards and bonuses to celebrate each of the series' classes for the year.  AMA Pro Road Racing photo by Evan Williams.
The following awards were given out on behalf of GEICO Motorcycle to the outstanding participants in AMA Pro National Guard SuperBike: