Sent on behalf of Daytona International Speedway:
DAYTONA BEACH, Fla. (October 24, 2013) -  The 73rd Daytona 200, America's most historic motorcycle race and the kick-off event to the GEICO Motorcycle AMA Pro Road Racing season, will be held on Saturday, March 15, 2014.
"Opening our season at Daytona International Speedway is a source of pride for AMA Pro Racing," said Michael Gentry, Chief Operating Office of AMA Pro Racing. "The racing is always competitive, and we're sure the fans are as excited as we are about starting the 2014 season." 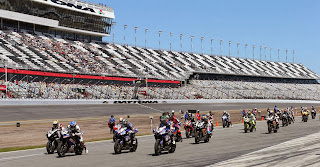 The 72nd Daytona 200 gets underway in March 2013 with eventual winner Cameron Beaubier on the #6 YES/Graves Motorsports Yamaha YZF-R6 on the inside pole.  Geico Motorcycle AMA Pro Road Racing has announced the 2014 race will kick-off the season at Daytona on Saturday, March 15. AMA Pro Road Racing photo by Brian J. Nelson.
The season-opening AMA Pro GoPro Daytona SportBike motorcycle race will feature riders battling the twists and turns of Daytona International Speedway's 3.51-mile road course for 57 laps, 200 miles. In the 2013 Daytona 200, Graves Yamaha rider Cameron Beaubier delivered a flawless performance leading 50 of the 57 laps on his way to a 22.254-second margin of victory.
Beaubier added his name to the long list of motorcycle legends that have conquered the Daytona 200 including Scott Russell, Miguel Duhamel, Mat Mladin, Kenny Roberts, Dick Klamforth and Brad Andres.
In addition to the Daytona 200, the Speedway will host a full complement of GEICO Motorcycle AMA Pro Road Racing classes March 13-15 including the National Guard SuperBike, Motorcycle-Superstore.com SuperSport and the Vance & Hines Harley-Davidson Series. The AMA Pro Flat Track doubleheader is scheduled for March 13-14.
Kicking off Daytona 200 Week on Saturday night, March 8 will be the prestigious Daytona Supercross By Honda - the only AMA Supercross event in Florida in 2014. The tough and challenging course will once again be designed by Supercross legend Ricky Carmichael.
Tickets for all motorcycle racing events are available by calling 1-800-PITSHOP or online at http://www.daytonainternationalspeedway.com.
Fans can stay connected with Daytona International Speedway on Twitter, Facebook, Instagram and Pinterest for the latest news all season long. Fans can follow the latest on DAYTONA Rising, the $400 million frontstretch renovation at the "World Center of Racing" by using #DAYTONARising on Twitter or visiting www.daytonarising.com.
About GEICO Motorcycle AMA Pro Road Racing:
GEICO Motorcycle AMA Pro Road Racing is the premier motorcycle road racing series in North America and is universally regarded as one of the most competitive road racing organizations in the world. The 2013 schedule consists of nine rounds of competition on the country's finest road courses. The Series is comprised of four production-based classes: AMA Pro National Guard SuperBike, AMA Pro GoPro Daytona SportBike, AMA Pro Motorcycle-Superstore.com SuperSport and the AMA Pro Vance & Hines Harley-Davidson Series. Learn more about GEICO Motorcycle AMA Pro Road Racing at www.amaproracing.com/rr/.
About AMA Pro Flat Track presented by J&P Cycles: