DAYTONA BEACH, Fla. (October 24, 2013) -  Heading into the 2013 season, AMA Pro Racing made a concerted effort to bolster the social media and live streaming offerings covering GEICO Motorcycle AMA Pro Road Racing and AMA Pro Flat Track presented by J&P Cycles events in order to provide new and innovative methods for fans to follow the company's two cornerstone national motorcycle racing series. Thanks to a number of successful initiatives, significant gains have been made and the company is looking to expand their internet-based outreach in 2014.
Live Streaming
Beginning with the season opening DAYTONA 200 and DAYTONA Flat Track races, AMA Pro Racing expanded their online coverage of the events on AMA Pro Live, the live streaming website developed in 2012. Over the course of the 2013 season, 166,854 unique visitors live streamed a total of 45,150 viewer hours via AMA Pro Live.
Located at http://www.amaprolive.com/, AMA Pro Live enables fans to stream live video from the events on any computer, smart phone or tablet. The website offers live timing & scoring data, play-by-play commentary via Twitter and viewpoints from a variety of cameras. In 2012, AMA Pro Live was conceptualized and developed to offer GEICO Motorcycle AMA Pro Road Racing fans a behind-the-scenes experience. Since being rolled out to AMA Pro Flat Track presented by J&P Cycles for the 2013 season, the dirt track community has rallied behind the concept and AMA Pro Flat Track fans accounted for over two-thirds of the viewership this season.
Also new this year, an International Pay-Per-View channel was added to AMA Pro Live, allowing GEICO Motorcycle AMA Pro Road Racing fans outside of North America to live stream fully produced race broadcasts.
Online DVR and AMA Pro Video
Following the kickoff event, AMA Pro Racing launched the AMA Pro Live Online DVR, giving fans access to flag-to-flag, high definition race broadcasts from the 2012 and 2013 seasons. The Online DVR has received overwhelming support from the fanbase, with nearly 100,000 unique visitors accessing the service in 2013, spending an average of one hour on the site during each visit. 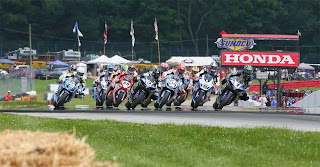