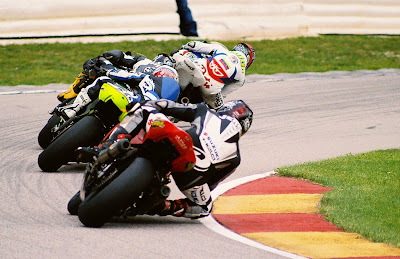 The Daytona Motorsports Group-led Geico Motorcycle AMA Pro Road Racing series announced yesterday that Road America, the iconic circuit located in Elkhart Lake, WI. and just an hour's drive north of Milwaukee will return to the series' schedule for the 35th straight year in the 2014 season.

The four+ mile track has been a regular stop on the schedule since the 1980 season and other than Daytona is the longest tenured event on the schedule for the premier road racing series on the North American continent.

In the shot above, Robertino Pietri on the #311 Maltin Polar/Roadracingworld.com-sponsored Suzuki GSX-R1000 leads this mid-pack battle during race one of the AMA Superbike Championship Series stop on the schedule in June 2008 as they come out of the turn 11 kink area at Road America. Bringing up the rear of this four rider battle is Scott Jensen on the #61 Pirelli/BG Oils-backed Suzuki.

Check out the full press release below from the folks on Fentress Blvd. in Daytona to get the dates set on your calendar for the upcoming event in 2014.


ELKHART LAKE, Wis. (October 25, 2013) -  Road America remains one of the most iconic circuits on the GEICO Motorcycle AMA Pro Road Racing schedule every year and on the weekend of May 30 - June 1, 2014, the 4.05-mile natural road course in Elkhart Lake, Wis. will play host to yet another highly anticipated weekend of competition.
The Series' premier AMA Pro National Guard SuperBike class first began competing on the legendary circuit as part of the 1980 season, the fifth year of competition for the class. Three decades later, the SuperBikes are still the stars of the show and 2014 will mark the 35th consecutive running of the event.
SuperBike star Josh Hayes has made himself at home at Road America over the last several years. The Mississippian has claimed six National Guard SuperBike victories at the track dating back to 2010, including an impressive five in a row. 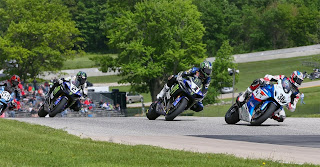 Martin Cardenas on the #36 Yoshimura Factory Suzuki GSX-R1000 leads Josh Hayes on the #1 Monster Energy/Graves Motorsports Yamaha YZF-R1 and team mate Josh Herrin #2 coming into turn 6 at Road America during one of the AMA Pro National Guard SuperBike Series races in June 2013. Geico Motorcycle AMA Pro Road Racing announced that the Elkhart Lake, WI. circuit will return to the series' schedule for the 2014 season for it's 35th annual visit. AMA Pro Road Racing photo by Brian J. Nelson.
In the 2013 rendition of the event, rising star Cameron Beaubier's only GoPro Daytona SportBike loss all season long came at the hands of Jake Gagne. The two Californian riders split the weekend's victories in what turned out to be a Midwest shootout between two of the sport's most talented up-and-coming riders.
Beaubier will put his skills to the ultimate test this go-around however, as the 2013 GoPro Daytona SportBike champion has graduated to the National Guard SuperBike ranks for 2014, joining top contender Hayes on the Yamaha squad.
Perhaps no one is looking forward to Road America more than Corey Alexander. The Carmel, N.Y. product went back-to-back and claimed victory in both of last year's Motorcycle-Superstore.com SuperSport races.
Steve Rapp's Vance & Hines Harley-Davidson Series win at Road America in '13 ignited a four-race win streak that eventually led to his capturing of the 2013 AMA Pro Vance & Hines Harley-Davidson Series championship. Rapp will be looking for a repeat performance when the thundering Harley-Davidson XR1200 machines roll into the Badger State once again.
For tickets and additional information on the 2014 event, please call 1-800-365-7223 or visit Road America online at http://www.roadamerica.com/.