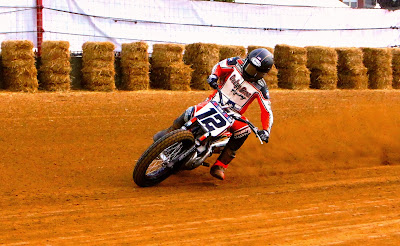 From the onset, The Bullet took fast time and then went out to take the fastest heat race win of the evening, won the Dash for Cash for the extra 5-point bonus and then led 15 of the 25-lap National main to seal the deal to take the win and earn the 2013 AMA Grand National Championship in his third full season in the Expert class.

Baker, on the #12 Dodge Brothers Racing/Specialty Fabrication Inc/Saddlemen-sponsored Harley-Davidson XR750 ran away in his heat race to take the win over Sammy Halbert by just shy of 4 seconds in the 10-lap race, and then fought tooth and nail with title rival Bryan Smith on the #42 Crosley Radio/Howerton Motorsports Kawasaki for the win in the main event.  Smith led the remainder of the laps in their battle at the front, which saw second-year Expert Briar Bauman round out the podium for his first-ever box appearance aboard the #14 Rod Lake Racing Suzuki 1000.

2012 AMA Grand National Champion Jared Mees ended up in the 4th-place spot on the #1 Rogers Racing XR in the main, and equaled that result in the overall championship standings, with TJ Burnett Farms Kawasaki rider JD Beach bringing the #95 mount home in the 5th-place spot.

Championship contender and double Springfield Mile winner Brandon Robinson still ended the season in the 3rd-place spot in the championship after taking the #44 TJ Burnett Farms Kawasaki to a 9th-place finish in the 25-lap National main at the LA Fairplex in Pomona.

The final championship tally saw Baker end the season with 219 points to Smith's 202 points, with BRob44 tallying 185 points in the season.  Robinson and Smith led the championship contenders with three wins each for the season, with Baker taking two on the year to seal what is his first of what could be several championships in his bright and young career.

In the shot above, Baker wrestles with the #12 Dodge Brothers Racing H-D XR750 during timed qualifying at the Indy Mile, round 8 of the 2013 AMA Pro Flat Track presented by J&P Cycles Grand National Championship season on August 17.

The Bullet's remarkable season was extremely strong, with only one finish outside the top-5 for the year (19th and last place at the Colonial Downs Mile in late August.)  With two wins (Hagerstown, Pomona), seven top-3's and 12 top-5's, Baker also became the third youngest AMA Grand National Champion behind Brad Andres and Jay Springsteen. 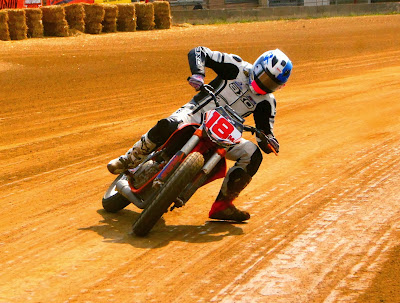 Maguire won the championship by just one point on the season, the closest-ever championship margin in the five year series' history, adding his name to a list of Pro Singles Champions including Brad Baker (2009), Jeffrey Carver, Jr. (2010), Mikey Martin (2011) and Stephen Vanderkuur (2012.)

In the shot above, Maguire finesses the #18M Kirkland Racing/Pro1Racingheads.com/FunMart KTM 450 SX-F through turn one at the Indy Mile during the Pro Singles qualifying session on August 17.

A big congratulations goes out to Brad Baker, your 2013 AMA Grand National Champion, for his stellar season in beating the best of the best and having a nearly-flawless year in doing so.  And a big tip of the hat to the Atherton duo of Dad and son, Dave and Kevin, for building great bikes for The Bullet to put his great season together and coaching him along throughout the year.  And congratulations also go out to your 2013 AMA Pro J&P Cycles Pro Singles Champion, Wyatt Maguire for putting together a super season to take the title in the junior/feeder series of The Rolling Thunder Show. 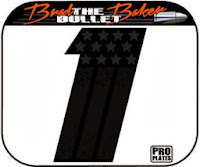 For a wrap up of last night's race, you can check out Larry Lawrence's report for Cycle News right here.

And AMA Pro Flat Track's official photographer, Dave Hoenig, snapped this album of great shots from last night's season finale.  A big thanks to Dave for all of his efforts and great work!

And you can view the full results of the evening from round 13 of the 2013 AMA Pro Flat Track presented by J&P Cycles Grand National Championship season from the Pomona Half-Mile here.

A big tip of the helmet and a thank you to all the competitors, teams and sponsors, as well as AMA Pro Flat Track, J&P Cycles (for their title sponsorship of the Pro Singles class) and for all those involved in making the 2013 season another in a long line of exciting and competitive events in The Rolling Thunder Show, the greatest racing series on two wheels in the world.

It was a big blast and a great experience to be able to report on it and attend a few events this season, and we're looking forward to new, improved and more great racing in the season to come in 2014!


POMONA, Calif. (October 12, 2013) - Brad Baker (Dodge Bros Racing/Harley-Davidson) capped off his most remarkable AMA Pro Flat Track presented by J&P Cycles season to date Saturday night.
Under the lights at the LA County Fairplex in Pomona, Calif., the Eatonville, Wash. product earned a hard-fought victory in the night's main event to bring the Law Tigers AMA Pro Flat Track Finals to a close, capturing the coveted No. 1 plate and overall Grand National Championship in the process.
"That was probably the best race of the entire season right there," said an ecstatic Baker. "Bryan (Smith) and I were going at it the whole time and I couldn't have asked for a better competitor.  There's no better way to finish off the championship than with a big win. I really have to thank my team, Dodge Bros Racing, for everything they've done for me this season and making all of this possible." 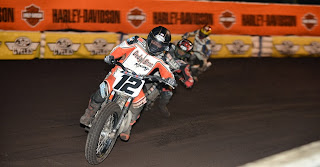 Brad Baker #12 leads Bryan Smith #42 and Jared Mees #1 in route to taking the win and capturing the 2013 AMA Grand National Championship at the season-finale of the 2013 AMA Pro Flat Track presented by J&P Cycles Grand National Championship at the Pomona Half-Mile.  AMA Pro Flat Track photo by Dave Hoenig.
Baker began his dominant march towards sealing the title early. He earned the top spot in afternoon qualifying, won his heat race and then the Dash for Cash before eventually topping archrival Bryan Smith (Crosley Radio/Kawasaki) by .706 seconds at the end of the 25-lap main event.
Baker, who for the most part ran a very smooth and impressive race, had one notable mishap that could have very easily cost himself the title on lap five as he went into Turn 2 a little too aggressive. Not only did the bobble force him to sacrifice the lead to Smith for the first time, but the 20-year-old came extremely close to losing control of his motorcycle and going over his handlebars; a wreck that would have surely cost him the championship. Fortunately for Baker, he was able to recover from his mistake and the hard charger fought his way back to the top spot -- despite two red flag situations that bunched the field -- officially reclaiming the lead from Smith for the final time on lap 13.
Baker and Smith's game plans for the season's final race couldn't have been more opposite as the two rode completely different lines going into the turns on nearly every lap. Baker always stayed high while Smith would stay low, trying to get any sort of advantage on the soon-to-be champion.
In the end, Smith's efforts weren't enough as Baker proved to be too strong of an opponent. Smith's second-place finish tonight earned him 202 points in the overall standings, enough for him to claim second in the overall Grand National Championship just 17 points back from Baker. Though Smith wasn't able to overtake Baker in the overall standings, he did manage to obtain the 2013 AMA Pro Expert Twins Championship for the second year in a row. Smith's two huge wins on mile-long circuits and multiple podium appearances on the back of his powerful Kawasaki EX650 earned him 161 points in the AMA Pro Expert Twins standings.
No one conquered more feats this year in AMA Pro Flat Track presented by J&P Cycles than the 2013 AMA Pro Grand National Champion Brad Baker. The 2011 Saddlemen Rookie of the Year earned his first ever win at the GNC Expert level at Hagerstown Speedway after having finished in second-place three consecutive times to begin the season. At 20 years, seven months, and 23 days old, Baker is the third-youngest Grand National Champion in the history of the sport.
AMA Pro J&P Cycles Pro Singles
J.R. Addison (Parkinson Bros Racing/Honda) blew away the competition in the final AMA Pro J&P Cycles Pro Singles main event of the 2013 season Saturday night. The Bucyrus, Ohio native won by a convincing 7.236 seconds over second-place finisher and Albion, N.Y. product Ryan Wells (Waters Auto Body/Honda).
"This is great to come here and get the win in the last race of the year," Addison said. "It's definitely a confidence boost going into next year. I got a really strong start and just tried to build on the lead after that. I really took a liking to the track and I have to give a huge thanks to Parkinson Brothers Racing for putting me on a rocket ship tonight."
Aside from Addison's complete domination over the field, Wells and Mead, Wash.'s Wyatt Maguire (Kirkland Racing/Yamaha) garnered most of the attention as the two entered the final race just five points apart atop the J&P Cycles Pro Singles point standings. In the end, it was Maguire whose fourth-place effort was barely enough to hold off Wells' second-place finish for the 2013 J&P Cycles Pro Singles title. The final point standings showed Maguire edging out Wells by a single point, 137-136, to win his first professional title in his burgeoning career.
About AMA Pro Flat Track presented by J&P Cycles:
AMA Pro Flat Track presented by J&P Cycles is a national motorcycle racing series in North America. Sanctioned by AMA Pro Racing, the Series is one of the oldest forms of motorcycle racing and is highly regarded as the most competitive form of dirt track racing in the world. The 2013 schedule consists of rounds on the country's finest dirt track courses. For more information on AMA Pro Flat Track presented by J&P Cycles, please visit www.amaproracing.com/ft.
Posted by Stuman714 in Indy at 12:25 PM