PICKERINGTON, Ohio -- October 28, 2013 -- Some of the toughest racers in American Motorcyclist Association amateur competition will line up at the Feb. 8-9 AMA Ice Race Grand Championship in Cadillac, Mich., to determine the first AMA national championships of the 2014 season. 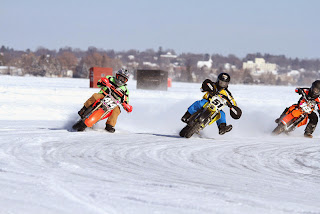 Riders battle at Mitchell State Park in Cadillac, MI. during the 2013 AMA Ice Race Grand Championship event. The 2014 event is scheduled for February 8-9. Photo courtesy of the American Motorcyclist Association by Jen Muecke.


"The winter season isn't the off season for everybody," said AMA Track Racing Manager Ken Saillant. "For many racers, January and February offer prime racing conditions with thick ice and plenty of competition to keep it fun and fast at the AMA Ice Race Grand Championship. We're looking forward to working with NAAS to offer our racers another great event."

The AMA Racing Ice Race Grand Championship features classes for riders from 4 years old to 50-plus competing on bikes ranging from lightly modified off-road machines to full-on, purpose-built ice racers. Riders will battle for AMA national no. 1 plates in a number of classes. The top riders at the event also will compete for the AMA Ice Racer of the Year award, given to the most impressive rider on the ice, while the youth riders will chase the honor of AMA Youth Rider of the Year.

"We are excited to host the 2014 AMA Ice Race Grand Championship," said Rosanna Grzebinski of NAAS. "The town of Cadillac is a great family-friendly location for this event, and you can bet there will be something for everybody to enjoy."

About the American Motorcyclist Association
Founded in 1924, the AMA is a not-for-profit member-based association whose mission is to promote the motorcycle lifestyle and protect the future of motorcycling. As the world's largest motorcycling rights and event sanctioning organization, the AMA advocates for riders' interests at all levels of government and sanctions thousands of competition and recreational events every year. The AMA also provides money-saving discounts on products and services for its members. Through the AMA Motorcycle Hall of Fame in Pickerington, Ohio, the AMA honors the heroes and heritage of motorcycling.
For more information, visit www.americanmotorcyclist.com.
Media contact: James Holter
Phone: (614) 856-1900, ext. 1280
E-mail: jholter@ama-cycle.org