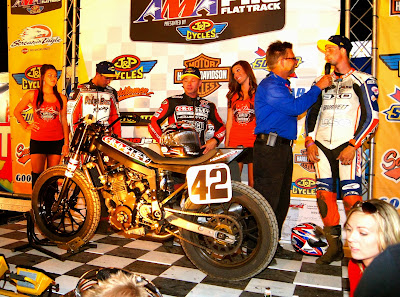 The season ending awards for the 2013 AMA Pro Flat Track presented by J&P Cycles Grand National Championship were handed out after the season-finale round at the Pomona Half-Mile on October 12, and although the monetary totals were not what a lot of people would have liked to see, the sport is still thriving in it's overall adrenaline boosting attraction.

Many will probably bit.h and moan about the lack of the big dollars that once were apart of the sport several decades ago, but the fact is The Rolling Thunder Show has not had the thousands of dollars available in sponsorship that was a part of the sport in the days of the heavy tobacco sponsorship that many of the old fans (like myself) remember. And some will bemoan the fact that 'today's economy' is not a good reason for the lack of dollars, but it's pretty plain to see that it has a big impact on what two and four wheeled sports have and are attracting in the way of corporate dollars, whether they are inside the industry or outside the industry.

But anyone with half a clue will also realize that with so many things going on in today's world, people have more of a choice in ways to spend their hard-earned money, if they are able to do so in terms of entertainment, and a big slice of that money once seen in AMA Pro Flat Track is being funneled to other areas-if the companies that have or were involved in the sport are even spending it in terms of any type of sponsorship or advertising. Yeah, excuses, excuses, excuses, but look at the big picture and you will see-and know as I do as a full-time fan of The Rolling Thunder Show, and who follows it with the utmost of sincerity, seriousness and adrenaline just like I did over forty years ago when I first found it, those excuses are plain old reality, and anyone thinking different simply doesn't have that clue.

And of course the costs of operating are higher than what they were in those days for not only the track promoters and the vendors, not to mention the teams, riders and sponsors of the greatest racing show on two wheels in the world.

But bottom line, at least some money is still being funneled and set aside for the year-end awards, and those pay-outs were awarded after the final checkered flag of the season at Pomona, with many a rider being recognized for their accomplishments throughout the season as a result. And with money being paid out to many of those riders, things have improved over what they were several years ago when no year-end bonuses or monies were paid-out to the riders.

The big winner of the big slice of the pie of course went to your new 2013 AMA Pro Flat Track Grand National Champion, Brad Baker, who in just his third season as an Expert-ranked rider won his first of what could be many championships in the top level flat track series in the world.

Baker took home the lion's share of the dough this season for winning the Grand National Championship and for also scoring the Singles Series title earlier in the season at the Peoria TT on August 11 while riding for the Dodge Brothers Racing team and campaigning his own Honda in the Singles events.

Bryan Smith was next in line after capturing the 2013 AMA Pro Flat Track Twins Series Championship for the second year running for the Howerton Motorsports team, while newbie to the top-3 this season, Brandon Robinson, took the 3rd-place honors for the TJ Burnett Farms team. Robinson was easily the most-improved rider this season, and his stunning double win at the Springfield Mile over the Labor Day weekend was enough to make even the most casual fan take notice of his presence at the top of the heap.

Jake Shoemaker won the 2013 AMA Pro Flat Track Saddlemen Rookie of the Year honors, joining former winners Baker, Matt Weidman, Jake Johnson and a host of other riders who went on to bigger and even better things as their careers progressed. Shoemaker's run this season was impressive in that he campaigned a privately-owned Kawasaki in the Twins events with an extremely tight-almost nil-budget, and did so in fine form.

There were several other awards presented this season, so a big congrats go out to all of the riders who took home the hard-earned dollars, as well as to those who didn't but yet fought the good fight throughout the season and added to what is still the greatest racing on the planet (as Dakota Dan Johnson from Today's Cycle Coverage likes to say!)

In the shot above from the Indy Mile on August 17, the top-3 finishers in the championship and at Indy-but in a different order than their season-ending battle-celebrate on the podium after what was another great show at the Indiana State Fairgrounds-hosted event run along with the 6th Annual Red Bull Indianapolis MotoGP weekend and the last weekend of the Indiana State Fair shining bright in the background.

3rd-place finisher Brad Baker, event winner Bryan Smith and 2nd-place man Brandon Robinson (being interviewed by one of the golden voices of AMA Pro Flat Track, Barry Boone) all show the emotion of what Indy and most especially The Rolling Thunder Show brings after the 25-lap National main had flown the final checkers for the evening.

Flyin' Bryan had just taken the #42 Crosley Radio/Howerton Motorsports Kawasaki rocket to the win at the legendary Indy Mile and had captured the hometown win for his team owner, Rick Howerton. Robinson had followed him home on the TJ Burnett Farms/James Hart Racing Kawi while The Bullet had taken the #12 Dodge Brothers Racing/Sefnco Communications H-D XR750 to the final spot on the box.

Just shy of two months after Indy these three men would also celebrate their stellar seasons in what was another great year of racing.

Check out the full press release below to get a better rundown of the awards handed out at Pomona a couple of weeks ago, and be thankful and happy that these guys (and gals) were able to pocket ANY extra dollars for their great efforts this season.

And when you want to bit.h and moan about the lack of money in the sport, get off the couch and go to a race and support the riders, teams and sponsors of the sport to help do something about it, because if you are just complaining and not giving anything back, YOU are part of the problem, and NOT the solution. And you are missing one heckuva great show!


DAYTONA BEACH, Fla. (October 24, 2013) - Following the conclusion of the AMA Pro Flat Track presented by J&P Cycles season finale at the LA County Fairplex in Pomona Calif., a year-end celebration was held on victory podium and streamed live as awards and accolades were distributed to the sport's top performers from 2013. 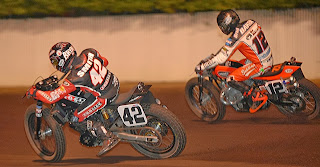