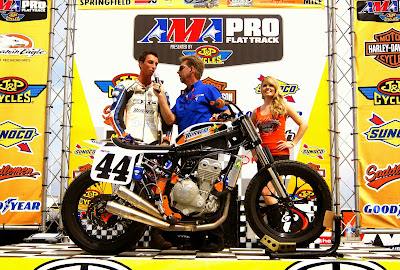 For a guy that just over four years ago bounced out of the park at the Indiana State Fairgrounds and was staring early retirement in the face from the great sport of AMA Pro Flat Track racing that he had loved so and worked incredibly hard to compete in at the top level, Brandon Robinson sure didn't show any lingering effects this season from that near-career ending multitude of injuries.

After starting off the 2013 AMA Pro Flat Track presented by J&P Cycles Grand National Championship season with a 5th-place finish at the Daytona Short Track I round, and then grabbing his first Grand National win the next night in round 2, Robinson had a career year this season that was highlighted not only with that first win back in March, but with his double win at the Labor Day weekend running of the Springfield Mile I & II at the Illinois State Fairgrounds.

Although the middle part of the season proved to be somewhat of a struggle and a big and bold learning experience, thanks to several crashes, one DNF and a handful of blown motors, Robinson and the TJ Burnett Farms Kawasaki teamed toughed it out, held their heads high and when the final checkered flag had flown and the dust had settled last Saturday in Pomona, were the 3rd-place ranked team in The Rolling Thunder Show.

Team owner Burnett told us back in August at Indy a day after going through kidney stone surgery that it wasn't the pain from his surgery that was hurting him, but the money he dug deep into his pockets for in order to keep the team going in the tough times, like when they lost one of their motors earlier in the day at the Indy Mile round held under the bright lights of the Indiana State Fair. And it must have been paying off pretty good and someone, somewhere was looking over their shoulder as Robinson put it on the box later that evening for a 2nd-place finish, just one of his six top-3, eight top-5 and ten top-10 finishes on the season.

And in the end, with another tough performance at the season-finale at Pomona, BRob44 and the team hung on for a 9th-place finish at the LA Fairplex, and as a result of their great season overall (team mate JD Beach in his part-time job for the team ended the season ranked as the 8th-place rider in the championship) and their highly professional look at the track, the team was also awarded the 2013 AMA Pro Flat Track Team Excellence Award.

Not too bad a year for a team that nearly didn't make it through the 2012 season, with a turn style mix of riders and quickly disappearing monetary backing, until Burnett came along to help out long time friend and chief wrench spinner for the team, James Hart, and salvaged and built what in 2013 was a team to be reckoned with in the greatest racing series on two wheels in the world.

So we take this time to give a standing ovation to a great group of guys who toughed it out and made it happen, and in the process excited the heck out of us, as well as most of the fans that had the pleasure this season of seeing them in action in the 2013 AMA Pro Flat Track presented by J&P Cycles Grand National Championship. Great job for all of your efforts, you truly deserve the great finish you came up with through it all.

In the shot above, Brandon tells the crowd on hand what it's like to have had a career day at the Springfield Mile I, round 10 of the 2013 AMA Pro Flat Track presented by J&P Cycles Grand National Championship on August 31 while AMA Pro Flat Track announcer Barry Boone mans the mic.  Robinson had a Groundhog Day at Springfield at both races, leading the field both days in qualifying fastest, taking the pole with the fastest heat race, winning the Dash for Cash and then grabbing the big pot 'o gold at the mecca of flat track racing by winning both of the 25-lap National mains, and leading for the first-time ever in an AMA Pro Flat Track Twins Series race a complete sweep of the podium, on both days mind you, of Kawasaki dominance.

A big tip of the helmet to Brandon and the TJ Burnett Farms Kawasaki team on their great year, and you can read more about it in the season wrap-up press release just out this evening.  Bravo guys!

Oxford, PA. – October 18, 2013 - Brandon Robinson closed out the 2013 AMA Pro Flat Track presented by J&P Cycles Grand National Championship season with a tough 9th-place finish at the Pomona Half-Mile season finale, to cap off his excellent first season with the TJ Burnett Farms Kawasaki team. “We struggled with set-up at Pomona and fought the track but just couldn't get it any better for the season finale,” stated Brandon after the rough weekend, “but to end up in the 3rd-place spot in the overall championship standings was great for our first year together. We're also looking forward to the 2014 season as we have things already set in stone to all stay together, so hopefully we can improve on that, and we're real proud of our three wins and six top-3s for the year.” 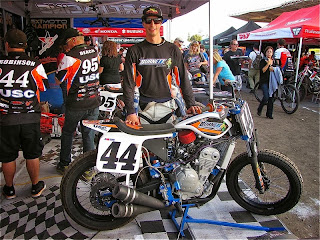 The TJ Burnett Farms team and Brandon were as disappointed as the fans were about the cancellation of the main events at the Santa Rosa Mile on September 29. “We were solid at Santa Rosa, but Mother Nature wasn't working with us that afternoon, and it was a shame for the fans as well as for us racers. But the Circle Bell Motorsports promoters and the officials with AMA Pro Flat Track made the right call in lieu of the safety factor involved with the heavy mist that had rolled in,” commented Robinson, “there was just no way to continue safely.”


The team did end the season on several big and bold notes. AMA Pro Flat Track awarded the 2013 Team Excellence Award to the TJ Burnett Farms team after the Pomona finale for their professional representation of the sport in the paddock and their great results on the track in just their first full season together, and Brandon also captured the championships (by a landslide) in both the Expert Twins and Expert Singles classes in the Steve Nace Racing All-Star AMA National Flat Track Series presented by GoldenTyre. “It was an honor to get the Team Excellence Award for TJ and the team, and winning the #1 plates in the Steve Nace All-Star Series was huge, as Jared Mees has pretty much had those covered for the last couple of seasons,” Robinson noted. 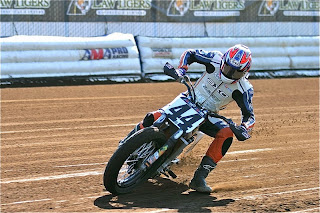 Brandon Robinson on the #44 TJ Burnett Farms Kawasaki is shown in action during one of the qualifying sessions at round 13 of the 2013 AMA Pro Flat Track presented by J&P Cycles Grand National Championship at the Pomona Flat Track Finals on October 12.  BRob44 toughed it out at the season-finale for a 9th-place finish in the National main at the LA Fairplex in Pomona to end the season ranked as the 3rd-place rider in the final championship standings. Photo by Tom Stein/Northwest Track Shots.

The team will be working hard during the off-season to come back and improve on their standings for the 2014 AMA Pro Flat Track Grand National Championship season. “We're headed to Oglethorpe Speedway outside of Savannah, GA. on November 9 for an outlaw race,” commented the double All-Star Champion. “We're going down to have some fun and do some testing since that is my favorite track.”


The team would again like to thank all of it's fans for taking the time to visit with us this season during the fan walks and after each of the races, and hope you are all as ready as we are for the new season to begin in several months at Daytona in mid-March, and are looking forward to another year together to show all of you fans what we can do again and in stepping it up for the new year ahead.


Brandon Robinson #44 & the TJ Burnett Farms Kawasaki AMA Grand National Championship team would again like to thank all of our sponsors for the 2013 season: