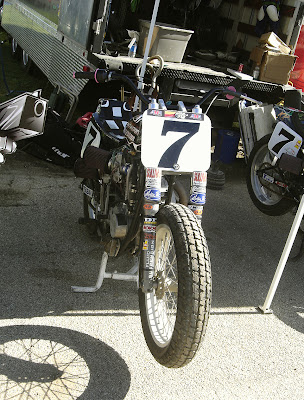 With the 2011 edition of the AMA Pro Flat Track Harley-Davidson Insurance Grand National Championship Series taking a break until the Springfield TT (round 6 on May 28), a handful of AMA GN regulars are sticking around California after last weekend's rounds 4 & 5 at Salinas, to contest the Eddie Mulder West Coast Dirt Track Series scheduled for round one in Rosamond tomorrow.  Among some of the racers scheduled to be on-hand racing at the Walt James Stadium 3/8-mile oval tomorrow include '09 AMA Pro Flat Track Grand National Twins Champion Jared Mees, AMA regulars Nicole Cheza, Chad Cose, Jimmy Wood (hot off of his first AMA podium from Salinas, and a noted West Coast regular attendee/winner in the Mulder series), and Sammy Halbert, who will be racing his Kings Kustoms/Halbert Brothers Racing XR750 on the weekend.

Eddie Mulder is a former AMA Flat Track Grand National Championship racer from the late '60s/early '70s who in his day was considered one of THE top riders in his element, one of which was in TT racing.  Along with former champion Gene Romero (WCFTS), Mulder runs a very competitive flat track racing series on the west coast that often plays host to some of the AMA regulars, when their schedule permits.  With the over four week break in the the AMA schedule those racers will be competing tomorrow in the opening round of Eddie's series held at Willow Springs Raceway.  Halbert considers this his favorite all-around track (and makes note that he wishes there was an AMA National race held at Willow's Walt James 3/8-mile oval.)

The racers will have today for practice at Willow Springs, and tomorrow is slated as a full day with several classes of racing.  Practice today runs until 4 P.M. PDT, and practice on Sunday, May 1 starts at 10:30 A.M. PDT and racing begins at Noon PDT.

Here is the link to the info page for Eddie Mulder's West Coast Dirt Track Series.  Although the pre-entries page hasn't been updated for several days, it should have full results posted sometime during/just after the race weekend:

Here's a link to a couple of great videos with Eddie Mulder, the founder of the Eddie Mulder West Coast Dirt Track Series and one of the greatest racers from back in the day:

Miriam Deitcher has been covering flat track racing for some time now and normally provides us with coverage of the AMA Pro Flat Track Harley-Davidson Insurance Grand National Championship Series.  This weekend she will be on hand for what she is reporting to be her first time at Willow Springs for the Eddie Mulder Series, and will be providing coverage of the racing this weekend via her Flat Track Live page on Facebook.  You can keep up with what is going on in Rosamond via this link to Miriam's coverage:

Thanks to Jamey Blunt from Today's Cycle Coverage for this story of round one of the Eddie Mulder West Coast Dirt Track Series in Rosamond, CA. at Willow Springs Raceway being held tomorrow, May 1:

Here is the link to the Willow Springs International Raceway track layout map.  Note that Walt James Stadium is the 3/8-mile oval is centrally located just east of the Streets of Willow Springs road course:

You can also follow Sammy Halbert via his Halbert Brothers Racing page on Facebook, where he will be supplying pictures, updates and videos throughout the weekend with the help of Miriam from Flat Track Live on Facebook:

And here is Sammy's personal page on Facebook to help keep up with Slammy throughout the weekend and year: