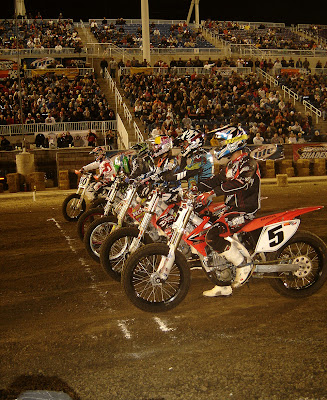 The AMA Pro Flat Track Grand National Championship Series could almost call the State of Illinois it's home state, what with all of the venues hosting The Rolling Thunder Show, from Peoria, to Springfield, to now Du Quoin after a six year hiatus.  With a spring and late summer stop at the Illinois State Fairgrounds, 6 of the scheduled 21 events on the 2011 calendar will be hosted by The Illini State.  And between the Peoria Motorcycle Club and the IMDA (Illinois Motorcycle Dealers Assoc.) and now Steve Nace Racing, these people know how to host, promote and show off the best show on wheels in racing.
Riders lining up for the Springfield Short Track round in September of 2010 above are a good mix of the riders to look out for not only this year, but today at the Du Quoin Indoor Short Track presented by Four Rivers H-D.  With this being the only indoor event on the schedule (and first in several years) the riders will be looking to push and shove and bang and bust their way to the front, in an event that very well could see sub-10 second laps.
From the outside pole looking in on row two at the Springfield Arena we can see Steve Bonsey lining up his #80 Bob Weirbach Racing Honda, followed by Bryan Smith just getting his front wheel in on his #42 Werner Springsteen Kawasaki.  Jared Mees on his #21 Rogers Lake Honda appears to be looking down to line up, while J.D. Beach on his #95C Craig Rogers Honda is focused for his first-ever run in the Expert Singles Class after just having graduated from the Pro Singles Series into the Expert ranks.
The second row is rounded out with two of the sport's fiercest and fastest men that The Rolling Thunder Show has ever produced, let alone championship leaders and contenders.  Kenny Coolbeth, Jr. on his #2 Bettencourts Honda and Jake Johnson on his #5 Zanotti Racing Honda.  Coolbeth won the Singles title in '07 while JJ sandwiched him with his two titles in '06 and '08, not to mention The King of Cool's three year run as the Twins Champion, and Jersey Jake's clinching of the overall AMA Flat Track Grand National Championship in 2010.
These are but a few of the contenders that will be banging and beating off one another in just a few short hours inside the Southern Illinois Center at Du Quoin.  And when the dust settles at the end of the day, one may be on top of the box, and one or more could be in the dirt.  Stay tuned, as the 2011 version of the AMA Pro Flat Track Harley-Davidson Insurance Grand National Championship Series is just starting to roll, and it's sure to live up to being the best show on wheels in racing!
-------------------------------------------------------------------------------------------------------------

In a little less then 12 hours, the men and women of the AMA Pro Flat Track Harley-Davidson Insurance Grand National Championship Series will be hitting the track inside the confines of the Southern Illinois Center at Du Quoin in what is a return to a venue that last hosted an AMA GNC race over six years ago.  Steve Nace Racing along with presenting sponsor Four Rivers H-D out of Paducah, KY. will be hosting The Rolling Thunder Show in round 3 of the greatest racing show on wheels.

With riders like Sammy Halbert, Brad Baker, J.D. Beach and Jared Mees having spent time doing some indoor riding during the off-season, other regulars like 2-Time and defending Singles Series Champion Henry Wiles, defending AMA GN Champ Jake Johnson and a host of others will be looking to mix it up with some of the best in the nation.  As of this writing, 41 pre-entries were on board for the Expert Singles Class, and 41 riders for the Pro Singles Class also are pre-entered.  Look for those numbers to go up some.

Stu's Shots is making the trek to Du Quoin to take in all the action and burn up some shots, but while we are away we have set up all of the links necessary to follow this great race throughout the day.  Miss Flat Track Reporter herself, Miriam Deitcher, is already on-site at Du Quoin and will be providing her usual 'bang out the keys as fast as the riders are coming by' in keeping fans up to the minute with her Flat Track Live Facebook page.  And the AMA Live Timing and Scoring, Facebook and Twitter feeds will also be keeping you clued in to what is happening at the track.

If we get lucky and internet access is reasonably close after the race, we will have a brief update on who did what.  Either way, by Sunday evening we will have some of the scenes and scores to share with you, and will do a couple of follow-up stories on this great event throughout the new week.

You can also read this preview of the Du Quoin Indoor Short Track by Larry Lawrence, who will also be covering the race for CycleNews.com:

Miriam Deitcher's Flat Track Live Facebook page.  A MUST HAVE to follow all the action! Thanks to Miriam for her help and efforts in providing this to all of the fans who can't make the races:

Where is Du Quoin, IL.?  Click below to see how to get there:

Du Quoin, IL. weather, courtesy of The Weather Underground.  Don't worry, the racing's inside at the Southern Illinois Center on the Du Quoin State Fairgrounds, so the racing will go on regardless of the weather outside: