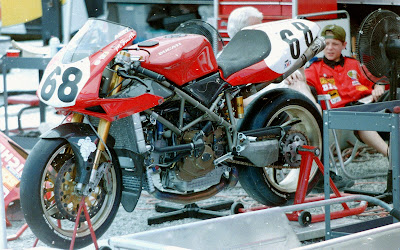 DAYTONA BEACH, FL (April 27, 2011) - The AMA Pro Road Racing Championship returns to asphalt May 2-3 at next week's official, two-day test at Miller Motorsports Park in Toole, Utah. Located just outside Salt Lake City, the beautiful MMP circuit will play host to the majority of AMA Pro's top competitors as they prep for both Round 2 at Infineon Raceway (May 13-15) and for MMP's BigM Weekend presented by Lucas Oil, which will see AMA Pro Road Racing's Round 3 run alongside Round 5 of the World Superbike Championship, May 28-30.

Team M4 Suzuki's Round 1 standout (and reigning Daytona SportBike champ) Martin Cardenas will likewise be honing his skills at MMP in the new-to-him class, joined by veteran teammate Chris Ulrich. The Michael Jordan Motorsports effort will be out in force with riders Ben Bostrom (Jordan Suzuki) and National Guard-sponsored Roger Hayden.

Foremost Insurance Pegram Racing's Larry Pegram will represent just one of a trio of BMW S1000Rs testing at the MMP facility, with Iron Horse BMW fielding both Chris Peris and Tony Kasper. In all, a total of fourteen AMA Pro National Guard SuperBike riders are currently registered for the test.

On the Suzuki side, 2009 Daytona SportBike Champion Danny Eslick (Richie Morris Racing/GEICO Powersports) will lead the Suzuki delegation to Utah, joined by M4 Suzuki's talented Dane Westby; Westby's teammate, Santiago Villa; and Vesrah Suzuki's highly capable Taylor Knapp and Cory West, among others. A trio of SuperSport Kawasakis will be headed up by Fernando Amantini, while Honda pilot Tyler Odom will likewise put his machinery through its paces.

Thirteen AMA Pro Motorcycle-Superstore.com SuperSport riders are slated to begin testing on Monday, the sessions serving as a preview of the highly anticipated Larry H. Miller SuperSport Challenge event, which will take place during the BigM Weekend and be broadcast live on SPEED2 Sunday, May 29, at 3:05 p.m. PST. Along with the BigM Weekend's AMA Pro Vance & Hines XR1200 race, the Larry H. Miller SuperSport Challenge will also be included in an AMA Pro Road Racing Special that will air Monday, May 30, at 9 p.m. PST.

The Motorcycle-Superstore.com SuperSport group will be led by Daytona winners Tomas Puerta and Daniel Gaviria on their Team LTD/Y.E.S. Yamahas. SuzukiScoopFans Racing's Elena Myers was also scheduled to attend the test, but having broken her arm in a Supermoto accident last Monday, she'll be forced to sit out the test and focus instead on healing in time for a possible return at Round 2. Corey Alexander, however, will be present to represent for Suzuki, while standout young-gun Benny Solis (Team Roadracingworld.com) will lay down laps on his Honda.

The above riders will be joined by Ducati pilots Brad Graham, Jose Flores, and Nicholas Hayman; newcomer Shelina Moreda (Triple Crown Industries Yamaha); and many more.

AMA Pro's Vance & Hines XR1200 riders are prepping for their first-ever appearance at MMP, and a minimum of eight of the big-twin pilots will be testing May 2-3. They'll also be preparing for the aforementioned expanded television coverage on SPEED and SPEED2 during the Memorial Day weekend, comprising a live broadcast on SPEED2 (Monday, May 30, at 12:20 p.m. PST) and inclusion in SPEED's AMA Pro Road Racing Special (Monday, May 30, at 9 p.m. PST).

Fans are welcome to attend the test, free of charge, and are encouraged to come out and cheer for their favorites. For directions and information, visit http://www.millermotorsportspark.com/ or call 435-277-RACE (7223). For additional information about the BigM Weekend presented by Lucas Oil, visit www.BigMweekend.com. For information or tickets to AMA Pro Road Racing's upcoming Round 2, May 13-15 at Infineon Raceway, visit http://www.infineonraceway.com./

AMA Pro Racing is the premier professional motorcycle racing organization in North America, operating a full schedule of events and championships for a variety of motorcycle disciplines. Learn more about AMA Pro Racing at www.amaproracing.com