AMA Road Racing: Could Mat Mladin Really Be Thinking of Returning in 2012? 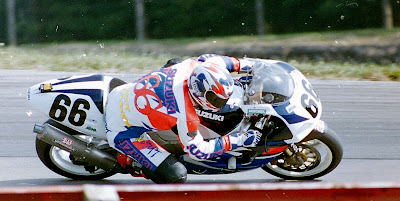 With AMA Road Racing and the AMA Superbike Championship slowly but surely trying to rebuild credibility into the series as well as lure the crowds back to the track after the debacle that was in the 2009 season with Roger E behind the charge (or near demise as it were), the series HAS and is seeing a better version of ownership and leadership since the arrival of the DMG folks and the subsequent take over of the AMA Pro Racing rights to the series.  But with the failed economy hitting home about the same time the rug was pulled out from under everyone, it is taking much longer to rebuild the trust in the fans, and taking longer for the one's that are trusting to return due to economic hardships as a result of the fall-out.  But the series is progressing, albeit slowly, just like the economic turnaround, or recovery as it should be.

One thing that definitely couldn't hurt the credibility of the series, however, are reports that retired 7-Time AMA Superbike Champion Mat Mladin is considering a return to the series in 2012, at the ripe young age of 40 years old.  Could this REALLY be a possibility, or is this just another pipe dream of hope?