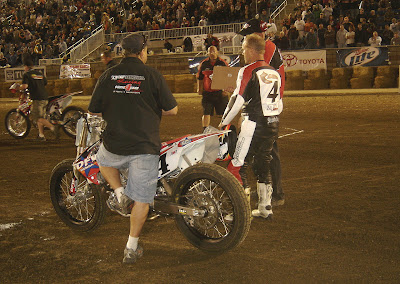 Kenny Tolbert holds the reigns of the #4 Chris Carr Racing/DFW Honda/Lancaster H-D/Street & Steel-sponsored CRF450 of 7-Time AMA Grand National Champion Chris Carr as an AMA Pro Flat Track official helps guide them to their starting spot for the upcoming Springfield Short Track in September of 2010.  The Prince of Peoria had to ride his back-up machine in the main event due to his primary mount going south in the Dash for Cash earlier in the evening, and was thusly forced to start on the back row.  After working his way through the field in the 25-lap final he ended up a very respectable 5th in the 19 rider event.  Carr finished the 2010 season ranked in the 7th position in the overall point standings, and announced officially before the 2011 season had started that this would be his last full-time year in AMA Flat Track competition.
With the Chris Carr Farewell to Flat Track Tour getting ready to land in Southern Illinois on Saturday, April 16, the man that has given back so much to this sport after over a quarter of a century in professional racing, #4 will be giving back a little more on Friday, April 15 with an autograph signing appearance at Four Rivers H-D in Paducah, KY.  If you are in the area, take the time to treat yourself to meeting one of the truly nice guys and one of the greatest champions of the sport and get by Four Rivers H-D if you can.  He'll be on hand from 3-5 P.M. talking with the fans and celebrating his long tenure with the H-D brand.
------------------------------------------------------------------------------------------------------------- 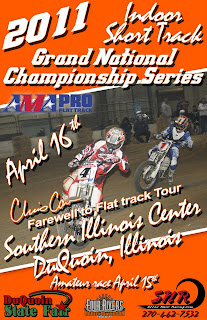 For more information on one of the most liked and respected names in AMA Pro Flat Track as well as the “Chris Carr Farewell to Flat Track Tour” go to www.chriscarr.com.

Here's the link to Four Rivers H-D in Paducah, KY. and we thank them for coming on board as the presenting sponsor of this great race.  If you are in the area on Friday, April 15 from 3-5 P.M., take the time to get by and chat with Chris Carr.  It should be a great time had by all:

A BIG thanks goes out to Steve Nace Racing for promoting this great venue and race!  Here's the link to all of the event info in and around DuQuoin, IL.: