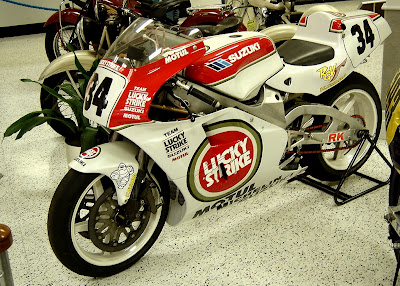 Great news for U.S. MotoGP fans hit the newswire in the last few days in that Austin, Texas will be the new home to a round of the MotoGP World Championship starting in 2013.  Along with Laguna Seca and Indy, the Texas track will host what is being touted as the third venue in the United States to host MotoGP, and the second along with Indy to host all three classes in the series.  Laguna has only hosted the MotoGP class while pairing up with the AMA Superbike Championship on the undercard.

The new facility will be called The Circuit of The Americas, and will host the premier road racing series in the world for what is being said to be a ten year deal.  Of course, this has left an awful lot of speculation as to whether Indy or even Laguna Seca, for that matter, will be able to draw enough spectators in America to warrant three venues on the North American continent, crap economy or not.  With Laguna's final day spectator count down to less than 90K last year, as well as Indy's, many are hypothesizing that one, or both tracks may be off the schedule after this point, in spite of Indy currently working with Dorna and MotoGP for a long-term contract after the single-year contract expires this year.  But that's another one for another day to discuss....

Putting that aside, the fact that MotoGP is coming to another venue in North America in itself is great news, and should help to spread the word on MotoGP racing here in the States.  Check out the announcement thanks to Kevin Schwantz', who is also on the board that helped bring MotoGP to Texas.  Ben Spies, the 2010 MotoGP Rookie of the Year and former WSBK and 3-Time AMA Superbike Champion was quoted as saying for a change that he will be able to drive to a race instead of having to fly.  Spies hails from Longview, TX.

Here's the official release about the announcement that MotoGP will be coming to Texas in 2013 thanks to Kevin Schwantz: