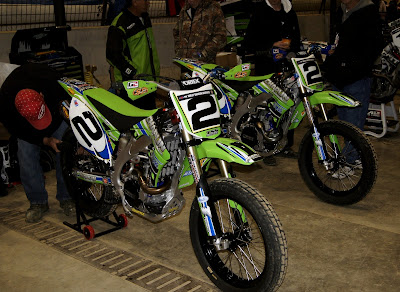 With practice and qualifying action just wrapping up at the DuQuoin Indoor Short Track, Kenny Coolbeth, Jr. bested the field on his Chaplin Kawasaki to take fast time for tonight's showdown inside the Southern Illinois Center.  With a total of 55 Experts timing in, that left 7 riders that had to pack it up and head to Salinas, CA. for next weekend's doubleheader round of TT and Short Track action.
Racing action kicks off in about 90 minutes for round 3 of the AMA Pro Flat Track Harley-Davidson Insurance Grand National Championship Series inside the confines of one of the finest facilities in the country.

Larry Lawrence has the story of the afternoon at CycleNews.com here:


Keep up with the rest of tonight's action inside the Southern Illinois Center with AMA Pro Flat Track's event info link here: