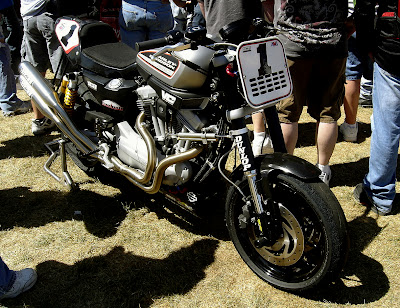 Harley-Davidson introduced the XR1200 in the United States during 2009 after the feedback they were getting from the model being introduced to it's European market, and when the bike hit U.S. shores, talk was started to come up with a racing series in AMA Road Racing to highlight the top-selling marques' new retro-racer.  AMA Pro Road Racing during it's 2010 season then introduced a new, five race series called the AMA Pro Vance & Hines XR1200 Series that ran at selected tracks such as Road America and Mid Ohio.
Similar (but not) to the old 883/Twin Sports Series from the early-mid '90s, the class features production H-D XR1200s with nominal modifications that actually put on a pretty good show on-track, highlighting rider skills and ability and good handling for what is essentially an over 550 pound 'road racing' machine.  For the 2011 season, AMA Pro Road Racing and Vance & Hines upped the ante to a full season to run in conjunction with it's premier AMA Superbike Championship and AMA Daytona SportBike classes.  Vance & Hines has a special catalog just for the XR, and has a special race kit available just for the series for $3500 U.S. complete.
At Daytona last month, the racing was close and tight and brought out some great talent in the form of Joe Kopp and even Mr. Daytona himself, Scott 'The Screaming Chief' Russell, and had an 18 rider field, of which 17 started and finished the seven lap sprint race on the big banks at the World Center of Speed.  The purse for the Daytona XR1200 event was $10,250.00 of which $3750 went to event winner Kyle Wyman on a Bruce Rossmeyer-backed machine.


DAYTONA BEACH, FL (April 1, 2011) - Making its first appearance on the high banks of Daytona International Speedway earlier this month, the AMA Pro Vance & Hines XR1200 class boasted its largest field to date and backed it up with a .016 second margin of victory. Next up for the big V-twin series is yet another debut, this time at Sonoma, California's beautiful Infineon Raceway.

At the end of its 2010 five-round debut, Danny Eslick---- who'd been dominant in the championship with three consecutive wins---- took the first AMA Pro Vance & Hines XR1200 Championship. Kyle Wyman, meanwhile, was less obviously competitive, with a couple of fourth-place finishes adding up to his best results in the class. He was in fact outshone by his younger brother, Travis, who finished second overall in the championship thanks to second- and third-place results.

At Daytona, however, the brothers traded spots and then some. With the XR1200s more than delivering on their promise of great drafting action, the front group of riders swapped the lead via giant slingshot maneuvers lap after lap. When Kyle ultimately beat Fillmore to the line by just .016, it was Travis (fifth-place finisher in Daytona's XR1200 event) who was first to congratulate his brother on the cool-down lap.

Kyle Wyman was joined on the podium by RMR Bruce Rossmeyer Daytona Racing teammate Chris Fillmore, and by the third-place finisher, Team Latus Motors Racing's Joe Kopp. With more than twenty entries posted for the opening event of its first full season---- and with Daytona's lead trio now in the sights of riders like Rapp, Travis Wyman, Tyler O'Hara, and many others---- look for Round 2 action to be even more intense.

Thanks go out to AMA Pro Road Racing for this link to the photos of round 1 in the AMA Pro Vance & Hines XR1200 Series at Daytona:

This is the link to the Vance & Hines Racing catalog for the XR1200, as well as some other photos and media releases pertaining to the new full-time class in AMA Pro Road Racing:

Joe Kopp, the now-retired 2000 AMA Flat Track Grand National Champion, talks about his first road race in the XR1200 class at Daytona, where he posted a fine third place finish on his Latus Motors XR: