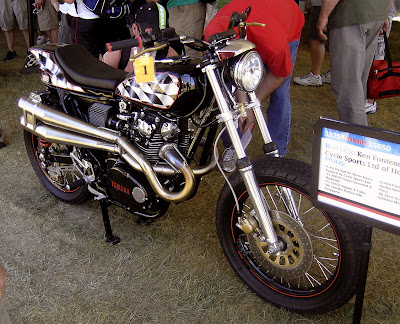 
Having been a fan of the Yamaha XS650-based flat trackers since my infatuation with AMA Flat Track Series racing began in the summer of' '74, I've also always held somewhat of an affinity for them in terms of the modern day street trackers are concerned.  Not being a 'current' street rider myself for some time now and choosing to enjoy the sport of high speed motorcycle racing from behind the fence as my means of an adrenaline junkie fix, I do enjoy a well-built machine nonetheless.  And the Yamaha XS has held true to my personal passion if for no other reason then seeing the gods like Kenny Roberts, Gene Romero and Hank Scott, among others, thrash and rip on them back in the day in AMA Flat Track Grand National Championship Series competition.

One of the longest mass-produced models by most manufacturers overall numbers, the XS650-based parallel twin was Yamaha's weapon of choice for fighting the battle that was in the day against the might of the-then Norton, Triumph and H-D factory machines in the Grand National Championship.  Riders such as Hall of Famers Chuck Palmgren (who campaigned Dan Gurney Yamahas), Don Castro, Mike Gerald, Darryl Hurst, Billy Schaeffer and Skip Askland, among many others, ran the XS for several years during the early-mid '70s of the AMA Camel Pro Grand National Championship Series.  To this day many of those period racers show up in varying states of display or use around the country, and are a testament to the brand's standing and popularity as well as the durability of the motor itself.

BikeExif.com has another version of a great XS street tracker build here.  Check it out: