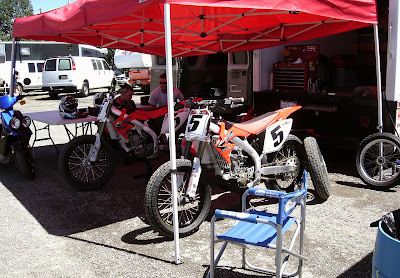 There's a good chance one or more of the young lions emerging in the series will make their mark at DuQuoin: both JD Beach (USC Motorsports) and Jeffery Carver (Woody Kyle Racing) have likely turned more laps on the small track than anyone else, as they've ridden almost all the Pro-Am races that have been held there during the last few winters. Fellow Rookie Brad Baker (ENI USA) has similarly honed his talent at indoor races in his home state of Washington, and he came out swinging in Daytona with a very respectable third and fourth. Baker is leading the Saddlemen Rookie of the Year chase while sitting third in the Grand National Points standings.

Johnny Lewis (Scott Powersports), meanwhile, is a veteran of East Coast indoor races, but his pair of second-place Daytona finishes have left him hungrier than ever for his first GNC victory. He'll have plenty of competition, though; the biggest news of the "Spring Break" has been Bryan Smith's departure from the potent Monster Energy Werner Springsteen Team. Smith will campaign his own equipment for the rest of 2011, riding a Kawasaki with help from Moroney's Harley-Davidson and RHC.

As the AMA Pro Harley-Davidson Insurance Flat Track Championship looks ahead to Round 3 at the Southern Illinois Center, the only certainty is tight, bar-banging action that's sure to produce surprises, and perhaps some hard feelings, as indoor racing is guaranteed to deliver an intensity like no other in the series. The ultra-fast dirt oval could produce single-second lap times, and the 30-lap National will no doubt become the roller derby of motorcycle racing.