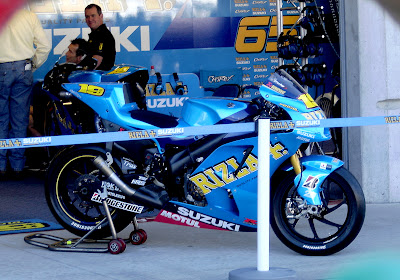 Rizla Suzuki team rider Alvaro Bautista was cleared to ride the team's GSV-R this weekend in round 3 action at the Estoril Circuit in Portugal, after breaking his femur in the season opener at Qatar just over 40 days ago.  With MotoGP having a three week break due to the earthquake disaster in Japan, and postponement (and still possbile cancelation) of the Motegi round, Bautista was afforded a little more time to recuperate after his injury.  Action kicks off tomorrow in Portugal and Bautista and Rizla Suzuki will make a determination after the first free practice session if he is up to racing for the whole weekend or not.

Here's the official press release thanks to the Rizla Suzuki MotoGP team: