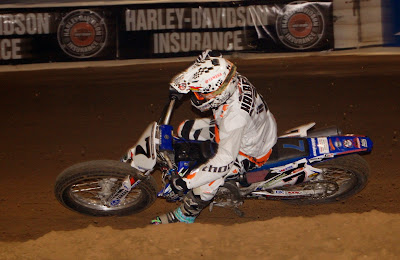 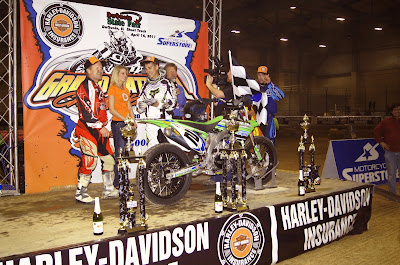 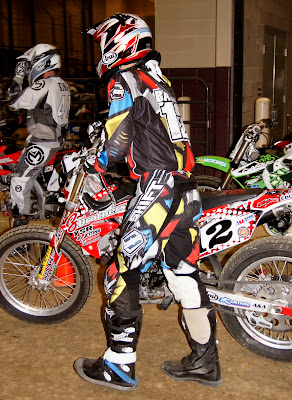 Row 3 and 4 of the main event at the DuQuoin Indoor Short Track presented by Four Rivers H-D and promoted by Steve Nace Racing was loaded with flat track talent.  (L-R) Donald Mullen II starts on the outside pole on his #71 Shevendoah Honda/Zafian Family-sponsored Honda CRF450R, and finished the evening in the 15th spot of the 19 riders in the main.  J.D. Beach brought his #95 USC Motorsports/Top 1 Oil/Alpinestars-sponsored Honda CRF450R (leaving his Kawasaki parked for the evening) out of the second semi behind Halbert and Baker, and then sandwiched the pair in the 6th spot in the final for a solid evening.  After missing both Daytona rounds, the full-time road racer and part-time flat tracker leaves DuQuoin in the lucky 13th spot in the standings with 13 points, and is on the pre-entry lists for Salinas without any conflicting road races to keep him from playing in the dirt.
Brandon Robinson probably would have preferred a top ten finish to his eventual 11th on his #44 Action Motorsports/Arai/Derby Ridge-sponsored Honda CRF450R at DuQuoin, but after an evening that started with 48 riders making the final cut-off to qualify for the evening (out of 55 Experts timing in on the day less then .5 seconds apart), leaving with 8 points and 18th in the standings to start the year off has got to be of some to relief for this tough young man.  Baker on his #12 and Halbert on his #7 get ready to hook-up with Beach in their march to the front.  John Wood on his #88 Scott Powersports/Bear Racing Products-backed Honda CRF450R had a rough evening finishing 18th in the 19 man field, but leaves DuQuoin 10th in the standings with 21 points.
Henry Wiles on his #17 Monster Energy Kawasaki/Don's/Jones Bros.-backed KX450F had a rough day in making the main, especially considering the 2-Time and defending Singles Series Champ's record in the Illini State.  Suffering clutch-related issues on the evening and getting rammed from behind in the third heat to make things go from bad to worse, Hammerin Hank had to use a provisional to start dead last, where he ultimately finished, 11 laps off the pace, with a bum leg that reportedly kept him being able to pivot in the corners.  He heads west 12th in the standings with 17 points, going into a two-race weekend of Singles Series events, where he is still the most dominate rider in the series over the course of the last few years.
-------------------------------------------------------------------------------------------------------------

Round 3 of the 2011 AMA Pro Flat Track Harley-Davidson Insurance Grand National Championship Series inside the Southern Illinois Center at DuQuoin, IL. is in the bags, and we've learned one thing at this early point of the season, and that is experience counts.  With three long-time series veterans making their mark at the DuQuoin Indoor Short Track, the young guns in the series were taken to school by the multi-talented champions.
Special thanks must go out on this well-run event to the great folks at Steve Nace Racing, who promoted the the return to the Southern Illinois Center after an over six year hiatus.  A most gracious vote of thanks goes out to Kelly with the Steve Nace crew for her help with all of the media credentials and seamless running of this great run on the bull ring for the Rolling Thunder Show.  And hat's off to new for '11 AMA Flat Track Director Dan Johnsen, Steve Morehead and the AMA Pro Flat Track crew for also putting on a great show last night in Southern Illinois.
The greatest show on wheels heads west for next weekend's doubleheader round at the Salinas Sports Complex for some TT and Short Track action in rounds 4 and 5.  If you are anywhere near the area you owe it to yourself to take in the oldest form of motorcycle racing competition in the U.S. and see the stars of the AMA Pro Flat Track Series.  In what is promising to be another great year in competition in the series, the great turnaround we have been experiencing in AMA Flat Track is heading full steam ahead!

Larry Lawrence has this story at CycleNews.com of the AMA Pro Flat Track Harley-Davidson Insurance Grand National Championship Series round 3 event inside the Southern Illinois Center at DuQuoin, IL."

Here is the link to the results for the DuQuoin Indoor Short Track at the Southern Illinois Center for the Expert Singles Class round 3:

AMA Pro Flat Track also has the complete results for both the Expert Grand National Singles Series, but the Pro Singles Series here:

Dave Hoenig has the overall results at his FlatTrakFotos.com, and within a couple of days will also have links to photos at the DuQuoin Indoor Short Track presented by Four Rivers H-D out of Paducah, KY.: