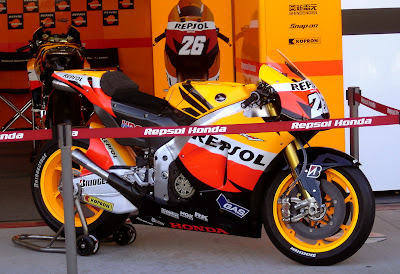 ﻿Dani Pedrosa's #26 Repsol Honda RC212V sits outside the team's garage area during the Indianapolis RedBull MotoGP round in August of 2010.  Pedrosa handily won the Indy event after passing early leader and pole sitter Ben Spies on the #11 Tech 3 Monster Energy Yamaha and going on to win by over 3.5 seconds over the up-and-coming 'rookie.'
Even with the shoulder problems that have haunted the Spaniard since last season, and with the upcoming surgery after the Jerez round to help rectify those problems, Dani was able to lead all comers in the premier MotoGP class in terms of overall speed and times in the three free practice sessions at the Gran Premio bwin de Espana round.  But just as it was at Qatar two weekends ago, team mate Casey Stoner on the #27 Repsol machine stole the pole going into tomorrow's main event for his 24th pole win in the series with a weekend fast time of 1.38:757 over Pedrosa and reigning '10 MotoGP World Champion Jorge Lorenzo.
Qualifying earlier today saw several riders crash and/or go off track (including pole sitter Stoner on his last lap) during the exciting one hour qualifying session.  Other riders to get a close up look at the gravel traps included 7-Time MotoGP World Champion Valentino Rossi, Randy DePuniet, Ben Spies and Hiroshi Aoyama.
-------------------------------------------------------------------------------------------------------------
The catch phrase 'same as it ever was' seemed to be the order of the weekend again during practice and qualifying at the Jerez, Spain round of the 2011 MotoGP World Championship as Repsol Honda team mates Dani Pedrosa and Casey Stoner again traded spots at the top of the charts before Stoner pulled out the pole earlier today in qualifying practice.  With the Repsol teamsters leading the rest of the field regularly (as they have done since early season testing)  the question on just about everyone's mind at this juncture has to be 'who can stop the Big H onslaught?'  With 16 rounds scheduled still to run after this weekend's Spanish round, maybe the question should be 'when 2012 rolls around with the new '1000cc' formula, will anyone have done their homework enough to overcome Big Red?'  And with Pedrosa scheduled for shoulder surgery after this round, is anyone ready to hand the title over to Casey Stoner for the 2011 season?
As everyone knows, anything and everything can/will happen in racing, but the season is starting to look like a Honda runaway, at least up at the front of the 17 rider field.  Repsol team mate Andrea Dovizioso isn't showing the level of consistency at this point on his #4 machine, while San Carlo Honda rider Marco Simoncelli seems to be the best bet to bring up the rear in the Honda camp.  The Italian is already strongly rumored to be the one to take over the seat of Dovi's machine for the 2012 season.
With the Honda riders catching all the press up at the front at Jerez, quietly lurking in the mix is 2010 MotoGP World Champion Jorge Lorenzo on his #1 Yamaha YZF-M1, who qualified in the third spot for tomorrow's final.  Rounding out the top five were Ben Spies on the #11 Yamaha and Simoncelli on his #58 San Carlo Honda RC212V.  Americans Colin Edwards on the #5 Tech 3 Yamaha qualifed in the 8th position while Nicky Hayden on the #69 Marlboro Ducati struggled to slot into the 11th position, 1.418 seconds in arrears to pole sitter Casey Stoner.
The Jerez MotoGP goes green tomorrow, Sunday April 3 at 0800 EDT/U.S. and will be covered 'live' by SpeedTV (DirecTV Channel 607) here in the States.  You can read up on the practice and qualifying sessions below to get ready for tomorrow's race.
-------------------------------------------------------------------------------------------------------------
David Emmett's MotoMatters.com is THE place to go for up-to-the-minute coverage of the 2011 MotoGP World Championship Circus.  Between David's wonderful penning of the happenings across the pond and ace photog Scott Jones' brilliant photography from on the scene, these guys are a great reason to check in on the happenings in the premier road racing series in the world at MotoMatters.com!
Jerez MotoGP Qualifying Practice here:
http://motomatters.com/results/2011/04/02/2011_jerez_motogp_qualifying_practice_re.html
Jerez Free Practice session 3 here:
http://motomatters.com/results/2011/04/02/2011_jerez_motogp_fp3_result_pedrosa_dom.html
Jerez Free Practice session 2 here:
http://motomatters.com/results/2011/04/01/2011_jerez_motogp_fp2_result_repsols_sti.html
Jerez Free Practice session 1 here:
http://motomatters.com/results/2011/04/01/2011_jerez_motogp_fp1_result_hondas_lead.html

Here's David's outlook on the day, which gives some great insight to the lack of grip level for the demanding Jerez circuit:

GPUpdate.net out of The Netherlands is another excellent place to go to keep up with the World of MotoGP.  Each round consists of the usual updates on times and happenings around the track and paddock, and their photo line-up from each event is extensive and well done.  The site is easy to navigate, as each round being showcased usually has a seperate side-bar w/ event links on the lower right side of the page.
As with the majority of sites I try to highlight throughout my coverage of any given event, GPUpdate.net's current feeds/links can also be found on the left side bar of Stu's Shots home page.

Check out the Jerez goings on here: