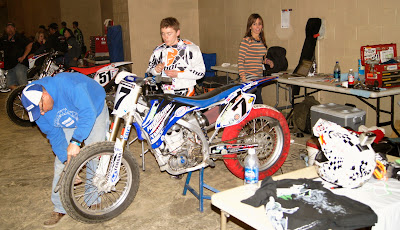 Sammy Halbert gets ready to pop in a set of ear plugs as final adjustments are being made on his #7 Woody Kyle Racing/Fredericktown Yamaha/Kings Kustoms YZ450F before he heads out for battle in round 3 action of the AMA Pro Flat Track Harley-Davidson Insurance Grand National Championship Series DuQuoin, IL. on Saturday, April 16.  The Southern Illinois Center hosted it's first National event in over six years last weekend, thanks to the tireless efforts of Steve Nace Racing and his crew, and presenting sponsor Four Rivers H-D out of Paducah, KY.  Drawing a field of 55 Expert and 48 Pro Singles riders, the DuQuoin Indoor Short Track National was also the first indoor event on AMA Flat Track's schedule in over six years and was a test of the best riders in the game going at it on the bullring while turning laps in the 11 second range.
Halbert, the '09 AMA Flat Track 'Mythical' Grand National Champion, came into DuQuoin with a 17 point lead after sweeping everything he touched a wheel on at Daytona from last month's opening races. One of the early favorites due to his training regimen and his 'off-season' racing schedule, this race would be right up Slammin' Sammy's alley.  Along with some other early-race favorites including Henry Wiles, J.D. Beach and Brad Baker, Sammy and the rest were left to fend for themselves when Kenny Coolbeth, 7-Time Champ Chris Carr and defending Champ Jake Johnson didn't get the note and came home 1,2,3 in a field packed with short track specialists.  This time the veterans took the kids to school!
After leading both Baker and Beach home in the second semi to qualify for the main event, all had a distinct disadvantage right off the bat in having to start from the third row.  And even with the National extended to 30 laps (AMA Flat Track decided to add 5 laps from the normal 25-lap main event to make up for the smaller size of the track), anyone any further back then the second row had their work more then cut out for them on this short and tight track.
During the final, Halbert, Beach and Baker methodically picked off riders in the event that lasted just shy of 6:20, and when the checkers had fallen had made their way to 5th, 6th, and 7th and had brought 'em home with nary a scratch. And they survived what could have been a ruthless battle with solid points, safe rides and able to look ahead to rounds 4 and 5 in Salinas this Easter Weekend.  And Sammy heads west with a still 16 point lead in the championship battle, with 18 rounds scheduled to go for 2011.  And it was a great show watching him come through traffic, just like it's going to be a great show for the rest of the season!

Slammin' Sammy is headed to Salinas, CA. as this is being written for rounds 4 and 5 of the 2011 series schedule, with Salinas hosting a TT for tomorrow afternoon's event and a short track for Easter Sunday's event at the Salinas Sports Complex.  The action is just revving up early in the season, and the Rolling Thunder Show is guaranteed to keep you on your feet all year long!

Sammy talks about DuQuoin and previews Salinas for us thanks to this great video on his YouTube site:

If you haven't bookmarked this yet, do so now!  Miriam Deitcher's Flat Track Live on Facebook will keep you from jonesing away from the track and you'll know exactly what is happening at the track: